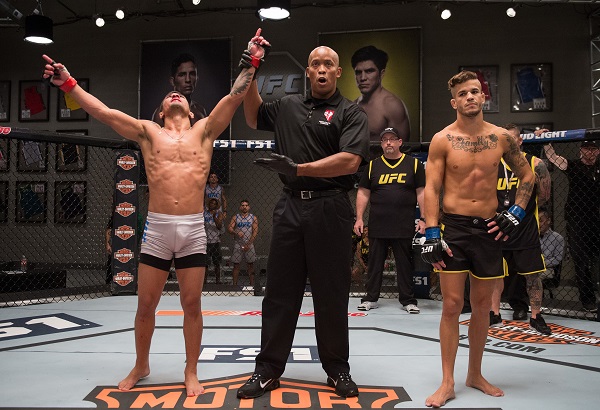 Six fights into The Ultimate Fighter 24, and all six have ended with either a knockout or submission, and the streak stayed alive this week, as Ronaldo Candido locked in a first-round rear naked choke to put away Jaime Alvarez in the latest flyweight battle.

Before the fight started, Candido and Alvarez both gave an intimate look into their lives outside of the show and what they are fighting for as they seek a shot at Demetrious Johnson and the flyweight title.

Candido lives in a favela in Brazil in a very modest home, but he wakes up every day and stares directly at his Shooto South America flyweight title as a constant reminder of what he's working towards. At the gym, Candido is a training partner and coach for interim UFC featherweight champion Jose Aldo. The two actually teamed up ahead of Aldo's first scheduled fight with Conor McGregor in 2015 and they've been together ever since. Aldo spoke Candido's praises and believes he could be the person to pull off the win and eventually make his way to a flyweight title shot in the UFC.

Candido also spoke about his girlfriend, who lives in Michigan but communicates with him in flawless Portuguese. Before he left for the show, she gave him a pile of letters that he could take with him that would give him messages from her throughout the show. According to Candido, his girlfriend made letters specifically for moments when he was sad, frustrated, angry or just when he missed her. It was clearly a great motivating tool for Candido as he kept pictures of the two of them by his bedside, and it gave him even more to fight for when he stepped into the Octagon with Alvarez.

Ahead of the fight this week, Candido, Alvarez and the rest of the fighters enjoyed a little down time when the UFC brought in a big screen TV and allowed them to watch the action from UFC 200 back in July. It was a welcome break for everybody, but it was a special event for both Candido and Alvarez because they had teammates competing on the card.

For Candido, he watched his teammate and friend Jose Aldo go out to face Frankie Edgar with the interim featherweight title on the line. Candido was definitely living and breathing through every moment of the fight as he watched Aldo's attacks over all five rounds while warning the other fighters in the house that it would probably be best to leave him alone during those 25 minutes. When it was over, Aldo was crowned champion once again while Conor McGregor kept a watchful eye from outside the cage on an opponent he may face again in the future.

"He deserves and he wants the fight with Conor McGregor," Candido said about Aldo.

As for Alvarez, his interest in UFC 200 came during the main event, as teammate and training partner Amanda Nunes from American Top Team went for her first shot at gold when she faced Miesha Tate. This fight didn't take nearly as 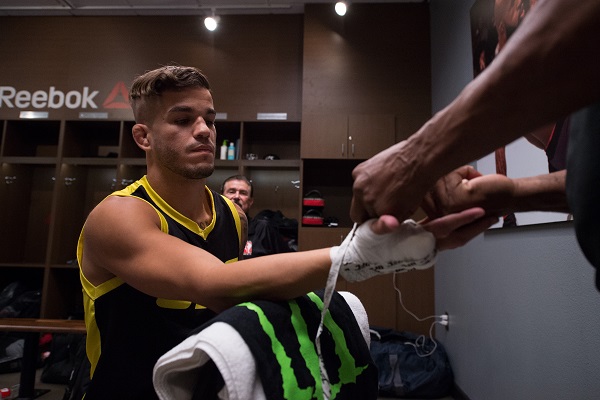 much time after Nunes went on the attack early, just as Alvarez predicted, and before long she was on top of Tate, raining down shots and looking for the finish. Nunes finally wrapped things up with a rear naked choke just minutes into the first round as she celebrated with tears of joy while the title was being wrapped around her waist.

It was a great moment for both Candido and Alvarez because it gave them an even closer look at what it's like to fight, win and go home with gold in the UFC. Both of them hope to do that by winning this tournament and then snatching the title away from Demetrious Johnson in December.

Once UFC 200 wrapped up, it was time for Candido and Alvarez to prepare for battle. Candido knew that his best plan of attack would be to take Alvarez to the ground and apply his world-class Brazilian jiu-jitsu game. On the flipside, Alvarez said time and again that he wanted to keep Candido on the outside and hurt him with his reach and power punches. Henry Cejudo warned him time and again to make sure to keep Candido on the end of his punches or the crafty Brazilian would swoop inside and look for the body lock to get the fight to the ground.

As soon as the fight started, Candido was the aggressor, as he plodded forward and began stalking Alvarez around the cage. Candido was poised with his striking as he unleashed an early kick that landed with a smacking sound while Alvarez quickly returned fire with a head kick that was blocked. Candido continued to press forward, but it all backfired when he got into an exchange with Alvarez that ended with a right hand cracking the Brazilian and sending him to the mat.

Alvarez quickly followed him to the ground and he punched away at Candido, looking for the finish. The referee even warned Candido to defend himself, but he did a great job grabbing on to Alvarez and not taking any more damage. Candido eventually transitioned to a heel hook on the leg that made Alvarez play defense and it gave the Team Benavidez fighter a little extra time to recover. Candido didn't get the leg lock but he quickly transitioned to latch on to Alvarez's body and get the clinch against the cage just like Cejudo warned him. Candido pulled Alvarez to the ground, worked his legs around the body and it was clear the he was looking for the submission. Alvarez was able to stand back up again, but he couldn’t shake Candido loose. 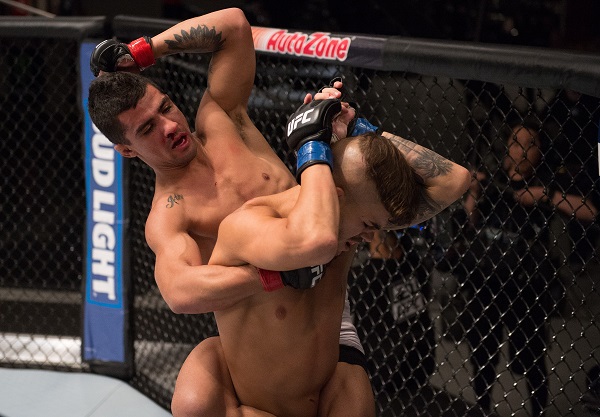 Candido patiently and methodically wrapped his body around Alvarez until he coiled his arms under the chin and wrapped up the rear naked choke. Alvarez only gave a single tap as the fight was stopped in the first round.

During his celebration, Candido charged towards the corner and shouted "remember my name" at Cejudo after he failed to get the Brazilian's name correct during the fight announcement from the previous week. It was an impressive showing from Candido, especially after he got rocked and dropped early in the fight.

Candido moves on in the tournament while Team Benavidez now ties up the competition with Team Cejudo at three wins apiece.

Next week will feature a battle of the Matts as Matt Schnell from Team Cejudo faces off with Matt Rizzo from Team Benavidez. Don't miss a minute of the action Wednesday night at 10 p.m. ET on FS1.