The first big upset of the latest season of The Ultimate Fighter took place this week, but that wasn't the only action that happened as Team Cejudo went up 3-1 in the competition.

After last week's win by Hiromasa Ogikubo, No. 4 seed Damacio Page looked to keep the momentum rolling as he prepared to face dark horse favorite Adam Antolin, who entered the fight with an impressive 11-3 record while training out of the American Kickboxing Academy in San Jose. As the tournament kicked off a few weeks ago, Page had to be an early favorite to at least make it to the semifinals after entering the competition with a wealth of experience and likely the most knockout power of anybody in the house.

Before he ever stepped foot in the Octagon, Page nearly had an altercation with coach Henry Cejudo after his fight with Antolin was first announced. Back in 2014, Page was supposed to fight Cejudo for the inaugural Legacy Fighting Championships flyweight title, but the bout never took place. Cejudo pulled out for "personal reasons" and then a few months later he was signed by the UFC, so the two rivals never got to face off in the cage.
RELATED: Recap Episode 2 | Meet the fighters - Damacio Page | Adam Antolin

Page has never let that grudge go because he believes deep down that a win over the Olympic gold medalist would have earned him a spot back on the UFC roster. Instead, he had to continue to amass wins outside the promotion before being invited on to the show this season.

"He didn't show, he just didn't want to fight," Page said. "Pretty sure it cost me getting back in the UFC but, you know what, it all worked out for the better because now I'm here and I'm here to fight for the world title."

Page knew the show gave him the best chance for success in the UFC because with a win in this tournament, he would be granted an automatic shot at flyweight champion Demetrious Johnson. Page actually fell to Johnson several years back when they met in the WEC, and he wanted nothing more than to avenge that defeat while also getting UFC gold around his waist.

Fighting out of Albuquerque, New Mexico, Page talked in depth about his struggles to make it to this level of the fight game after plenty of trials and tribulations in his life. Page lost his mother to cancer several years ago and now, as a tribute, he takes her ashes everywhere he goes and leaves a little bit behind so she can finally see the whole world along with her son. It's clear this tournament meant the world to Page because he knew this was his shot to get back to the UFC and prove that he still belongs among the elite fighters in the world.

His opponent, Adam Antolin, had a much different route to the show after he was a former junior college wrestler who eventually teamed up with the American Kickboxing Academy in San Jose. Under coaches like Javier Mendez and Daniel Cormier, Antolin has gone undefeated in his last seven fights and UFC President Dana White said that he could even be a dark horse to not only beat Page, but win the entire competition.

It was also clear this week that while Page and Antolin were ready to go to battle with each other, there was no bad blood or animosity ahead of the fight. In fact, Antolin even gave Page a pre-fight haircut just hours before they faced off in the Octagon.

While Page and Antolin were getting along like old friends, coaches Joseph Benavidez and Henry Cejudo continued their war of words after last week started the verbal altercation between the two flyweights. This week, Benavidez fired back at Cejudo for claiming that he was supposed to be a good role model to fans and fighters alike and he should be setting an example with his behavior on the show. Benavidez told Cejudo quite emphatically this week that he's not a role model and while he hopes people do find a way to be inspired by what he does, he's not trying to serve as an example to anybody.

Benavidez also dropped a bomb on Cejudo when it came to his own claims as a role model.

"You can't be a role model if nobody wants to be like you," Benavidez said about Cejudo. "I've never heard one person say, 'You know who's cool and seems cool and I want to be like and fight like - Henry Cejudo.’ No one's ever said that in their life."

It appears this battle is going to continue until Benavidez and Cejudo finally fight in December. 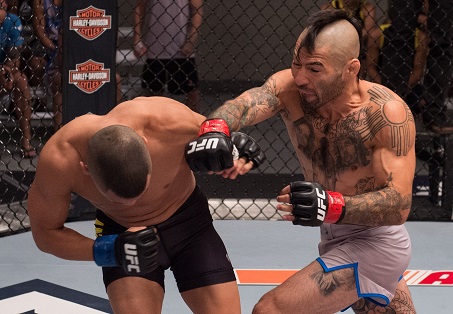 The fight between Page and Antolin was everything promised and more as these two flyweights engaged in a back and forth battle on the feet. Page came out aggressive as expected and started head hunting for knockout shots right away. Page tagged Antolin with a hard shot early and it looked like he had the Team Cejudo fighter on the run, but he was able to compose himself and stay out of danger long enough to recover.

While Page was constantly fishing for the knockout, Antolin stuck to the game plan set up by his coaches where he targeted the body over and over again throughout the opening round. Antolin cracked Page with several hard kicks to the body, and with each shot that reverberated through the arena, it was clear he was accomplishing his mission to slow down the heavy-handed striker.

In round two, Antolin's constant attacks paid off as he unloaded another brutal body kick that landed flush, and this time Page dropped the mat wincing in pain. Antolin quickly followed up to land more strikes, but the referee swooped in to stop the action just as Page was getting up from the canvas. After the fight was stopped, White admitted that it was a poor ending to an otherwise great battle, but the bout was over and Antolin got the win.

Clearly, Page was distraught by the outcome considering he still felt fine to continue, but the referee made a judgment call and it ended with the nearly 30-fight veteran eliminated from the show. 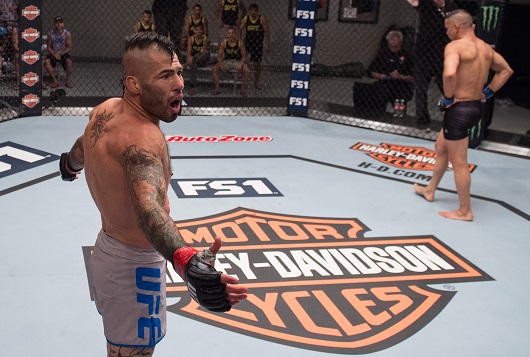 With Antolin's win, the left side of the bracket is now complete and the tournament will shift to the right side of the bracket next week as No. 2 seed Yoni Sherbatov from Team Cejduo will take on No. 15 seed Eric Shelton from Team Benavidez. Considering Antolin's upset win, it's clear anything can happen in this tournament, so Shelton will certainly be gunning for a win as he takes on the No. 2-ranked fighter overall.

Don't miss a minute of the latest episode when Shelton squares off with Sherbatov on the latest Ultimate Fighter next Wednesday night at 10pm ET on FS1.