Demetrious Johnson has a new challenger ready to fight for his flyweight title.

Tim Elliott has earned the right to face Johnson with the championship up for grabs after he beat teammate Hiromasa Ogikubo in the finals of The Ultimate Fighter: Tournament of Champions.

Elliott and Ogikubo were training partners all season long before meeting in the Octagon, and the fight didn't disappoint, as they went back and forth for 15 minutes to determine a winner.

Before the fight started this week, the competitors on the show began to say goodbye to teammates and coaches following 14 fights that finally led to the matchup between Elliott and Ogikubo. For Henry Cejudo, the last episode was slightly bittersweet, considering he saw the last of his fighters eliminated a week ago when top seed Alexandre Pantoja fell to Ogikubo in the semifinals. For the last episode, Cejudo was largely a bystander watching the action, but it's clear that the former Olympic gold medalist has no regrets about the season he spent grooming eight top flyweight fighters.

As for his fellow coach Joseph Benavidez, he decided to spend his last hours with the team at dinner, where he thanked all of them for making this season so special for him. Benavidez didn't join the show with any preconceived notions about how things would go, but he became close with virtually everybody on his team throughout the course of the season. 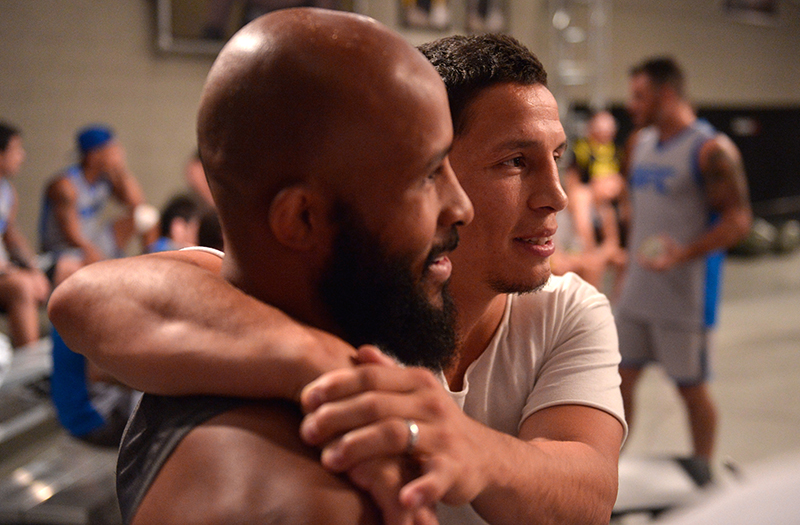 Ogikubo - with the help of a translator - explained how he wished he had been able to communicate with his teammates better throughout the season, but ultimately he loved all of them for the help they gave him and the warm welcome he received on the show. As for Elliott, he was candid while admitting that he actually didn’t want to do The Ultimate Fighter when he was first asked.

After being released from the UFC in 2015, Elliott moved on to win his next three fights in a row while capturing the Titan FC flyweight title. At that point, Elliott felt like he should have been brought back to the UFC, but instead he received the invitation to join the reality show. Elliott was thankful that he ultimately took the opportunity and now he stands one fight away from competing for the flyweight title.

Once the dinner was finished and weigh-ins were completed, it was time for Elliott and Ogikubo to meet in the Octagon. Johnson actually joined UFC President Dana White cageside to watch the action unfold while also scouting the fighter he would be facing next.

Knowing that Ogikubo would undoubtedly look for the takedown early, Elliott came out of the gates fast and immediately established a stinging left jab that popped the Japanese-born flyweight several times in the opening seconds. Those punches led to Ogikubo swooping in for a quick double leg takedown, but after getting planted on the mat, Elliott was quick to scramble before returning to his feet just a few seconds later. 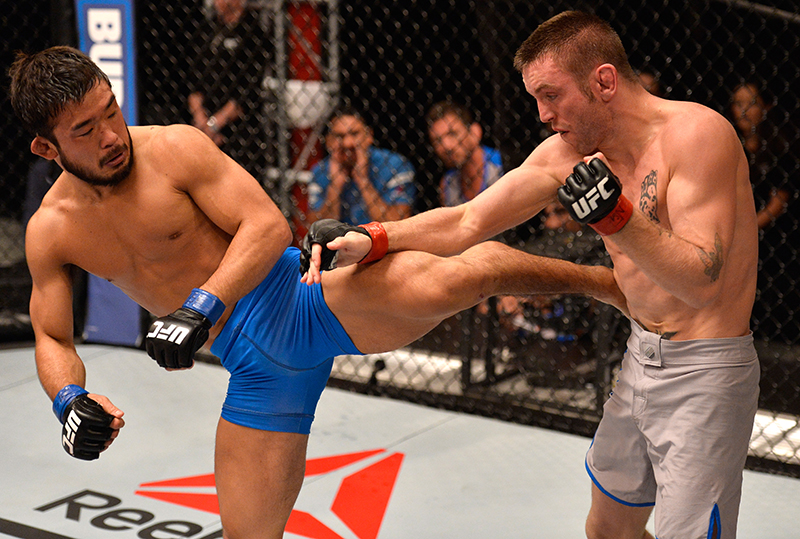 From there, Elliott concentrated on his striking game again with a few more hard-hitting combinations while also tagging Ogikubo with a series of inside leg kicks. Those striking exchanges led to a takedown attempt from Elliott, who quickly put Ogikubo on the mat and on his back, which was the last place he wanted to be. The rest of the opening round played out exactly the same way, with Elliott and Ogikubo exchanging takedowns and neither one of them really figuring out a way to keep the other on the mat for more than just a few seconds.

The second round was by far the most definitive of the entire fight, as Elliott decided to put Ogikubo down on the ground before working to take his back. Elliott was explosive after putting Ogikubo on the mat, and instead of being resigned to the fact that his opponent would scramble back to the feet, he decided to switch things up by latching on his back and pulling him back to the ground. From there, Elliott started fishing for a rear naked choke and it appeared like he might get the submission, but Ogikubo stayed patient and calm while looking for a way to escape. After getting out of that position, Ogikubo saw an opening for a guillotine choke of his own, but that success was short-lived as Elliott quickly reversed positions and took his back once again.

The final round saw Elliott continuing to get the better of Ogikubo in the scrambles after the two fighters exchanged takedown after takedown throughout the fight. Where Elliott was really able to take advantage was catching Ogikubo with his unorthodox and quick movement throughout the five-minute session. For every move Ogikubo made, Elliott seemed to have two or three of his own in reaction. To his credit, Ogikubo refused to go away, and at one point he even leapt on Elliott's back while standing in an attempt to lock up a submission. Unfortunately, Ogikubo was at a loss offensively while Elliott just continued to pour on his attacks throughout the fight.

When it was all over, Elliott was declared the winner, with 30-27 scores returned from all the judges. 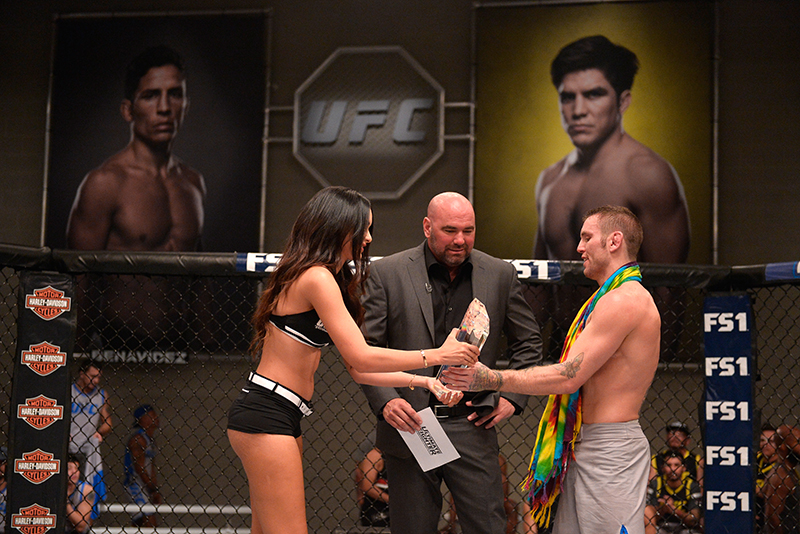 "To get this opportunity, it's everything," Elliott said after the win.

Now Elliott is set to square off with Johnson on Saturday night with the flyweight title on the line. While Elliott will definitely be a decided underdog to the eight-time defending champion, White cautioned everybody to remember what happened when Matt Serra won The Ultimate Fighter season 4 and went on to knock out Georges St-Pierre for the welterweight title when he competed for the championship as his reward for winning the show.

For his part, Johnson didn't seem all that impressed, much less worried about what Elliott will bring into the Octagon when they meet on Saturday night.

"My stats speak for themselves. I'm a better fighter than Tim Elliott," Johnson said.

The coaches from this season will also battle it out on Saturday night, as Joseph Benavidez faces Henry Cejudo in the co-main event. They shared an intense staredown in the Octagon just after the show wrapped up and Benavidez let Cejudo know that after he's done with him, he'll be irrelevant in the flyweight title picture.

"You're not going to matter after this," Benavidez said to Cejudo.

It all goes down this Saturday night, as flyweight king Demetrious Johnson meets Tim Elliott in the main event while Benavidez and Cejudo duke it out in the co-main event, live from the Pearl at the Palms in Las Vegas.