The final of The Ultimate Fighter: Tournament of Champions is now set after the semifinals unfolded in the latest episode.

In the first matchup, top overall seed Alexandre Pantoja from Team Cejudo took on submission specialist Hiromasa Ogikubo from Team Benavidez. While Pantoja came into the tournament as the No. 1 seed, he's arguably had a tougher road than almost anybody else in the semifinals after a grueling battle with Brandon Moreno and then a hard fought two rounds against Kai Kara-France in the quarterfinals.

Pantoja also entered the episode as the last man standing from Team Cejudo, and the only chance his coach had to put someone into the finals next week. Meanwhile, Ogikubo remained steadfast in his game plan to put Pantoja on the mat and begin working his versatile ground attack. Ogikubo has been very dominant thus far, but to make it to the finals, he knew it would be his toughest test to date against Pantoja.

As this fight got underway, Ogikubo wasted no time to latch on to Pantoja with a body lock while wrestling him against the cage in the clinch. Ogikubo nearly took Pantoja's back, but instead applied pressure until he secured the takedown and put the Brazilian down on the ground. From there, Ogikubu remained in control, and although he didn't do a ton of damage, Pantoja just had no answer for his offense on the ground.

Cejudo commented that the game plan for Pantoja was to either force Ogikubo to defend submissions or eat a bunch of elbows if he took the fight to the ground, but neither of those things happened. Instead, Pantoja simply waited for the right opportunity to spring back to the feet, but it wasn't easy with Ogikubo in complete control on the mat. 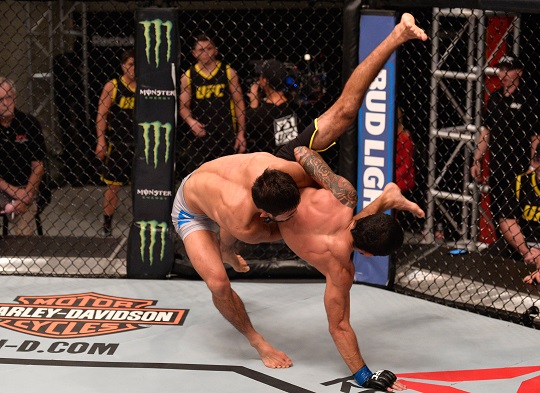 With about a minute to go in the opening round, Pantoja finally worked his way back to the feet, where he landed a couple solid leg kicks while Ogikubo fired back with some punches until the horn sounded.

The second round saw Ogikubo going for more of the same, except this time Pantoja was able to resist his takedowns in the early going. After Ogikubo went for a kick of his own, Pantoja caught it and tripped the Japanese flyweight to the mat. It was an ill-advised move, because Ogikubo eventually reversed positions and landed on top after a scramble. Pantoja was able to wiggle free in a hurry, but he just couldn't put together any real offense on the feet.

Ogikubo wasn't exactly dropping bombs while striking either, but he avoided taking much damage from Pantoja while still looking for the takedowns. Ogikubo finally secured another takedown and he kept Pantoja on the mat for the majority of the round as Cejudo screamed at the referee to stand them back up again. With about 40 seconds to go, the referee complied, but at that point it was already too late. Pantoja tried going for broke with a flying knee, but Ogikubo caught him and put him back on the mat as time expired.

When it was all over, Ogikubo was declared the winner and the first tournament finalist.

With the first fight out of the way, the attention then turned to the showdown between Team Benavidez teammates Tim Elliott and Eric Shelton. All season long, Elliott has said that Shelton was his best training partner, and if he was on the other side of the bracket, they'd probably be meeting in the finals instead of the semifinals. Still, Elliott knew that Shelton was standing in his way to get one more shot at the UFC and a crack at flyweight champion Demetrious Johnson.

This was, by far, the most exciting and fast-paced matchup of the season, as Elliott and Shelton left it all in the cage after going to war for two rounds.

After an initial scramble, Elliott was able to secure the takedown, where he started raining down punches and elbows to punish Shelton on the mat. Shelton kept moving on the ground and tried to lock up a triangle choke, but Elliott shrugged him off before seeing an opening for his own submission. Elliott grabbed on to Shelton's neck and fell backwards into a guillotine choke looking for the finish. 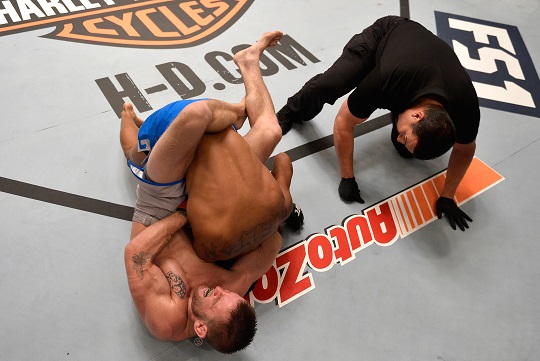 It appeared that Elliott might have the choke, but Shelton stayed patient while wiggling free of the submission, which then put him in a good position on top. Shelton's aggressiveness gave him a few openings before nearly taking Elliott's back, but the crafty UFC veteran kept in constant motion before reversing position on the ground. Elliott continued to attack with the guillotine choke until the end of the round, although he never put Shelton in any serious danger.

The second round saw another incredibly intense pace kept by both fighters as Elliott continued to look for takedowns while Shelton defended very well. Elliott's inability to land a solid takedown kept leaving him open for the reversal, where Shelton would land on top on the ground, but he could never maintain control for very long. The two fighters went back and forth for almost the entire five-minute session but it seemed like Elliott had slightly better offense while attacking with the guillotine choke and often winning the battle of position.

When the fight came to an end, coach Joseph Benavidez was convinced that there would be a third round, but instead the judges said the fight was over. Tim Elliott was declared the winner by majority decision, although even he wasn't fully convinced he deserved the victory.

"I think he deserved the third round and maybe even the win," Elliott said about Shelton.

The judges disagreed and now Elliott is moving on to the finals, where he will face his teammate Hiromasa Ogikubo, with the winner taking on Demetrious Johnson on December 3 in Las Vegas. It all comes down to this in the season finale of The Ultimate Fighter: Tournament of Champions next Wednesday night at 10pm ET on FS1.