The semifinals are set after two more bouts unfolded on the latest episode of The Ultimate Fighter, as Ronaldo Candido took on Eric Shelton while Tim Elliott faced off with Matt "Danger" Schnell.

Candido and Shelton kicked things off this week in a battle of Team Benavidez training partners trying to make it one step closer to earning that coveted title shot against flyweight champion Demetrious Johnson. With two of his fighters squaring off against each other this week, coach Joseph Benavidez largely bowed out of getting them ready and instead brought in his teammate and good friend TJ Dillashaw to help out.

Dillashaw had plenty of past experience on The Ultimate Fighter after fighting on season 14 and then serving as a guest coach back in season 22 as well. He was a valuable resource for both Candido and Shelton as they prepared to battle it out for a spot in the semifinals.

Candido teased before the fight started that he was going to show off more than just his world-class jiu-jitsu game, but he wasted little time getting inside on Shelton in an attempt to take this bout to the ground. Candido did a good job avoiding a big, spinning back fist from Shelton early and he grabbed on to a body lock before dragging the fight to the ground. Candido was relentless with his attacks as he used every ounce of energy to get Shelton to the mat, where he unleashed his full grappling arsenal to keep him there.

Candido did a great job advancing his position and trying to lock on to Shelton's back, but he couldn't quite wrap up a submission before he got reversed on the ground. Shelton found just the right moment to explode and turn into Candido's guard to escape the dangerous position. From there, Shelton was patient in escaping Candido's guard before getting back to the feet. Once the fight returned to striking, Shelton took over with a strong arsenal of punches while Candido was breathing heavy after putting everything he had into getting that submission on the ground. The round ended with Shelton landing a hard right hand that popped Candido and left him reeling as the horn sounded.

The second round saw a lot more of the same, with Shelton using a dynamic striking game to keep Candido guessing while the Brazilian was clearly running on fumes as he desperately tried to get the fight to the ground. With each shot getting sloppier and sloppier, Candido just came up short while Shelton was quick and reactive to make sure he always got back to the center to reset. While Shelton was clearly in control, he wasn't exactly firing off impressive combinations on the feet, although he was certainly doing more than Candido. The second round didn't exactly impress anybody, with Shelton playing it a little safe while Candido just had nothing left in his gas tank, but when the fight was over there was no doubt who came away with the victory.

The judges all returned 20-18 scores in favor of Eric Shelton, who continues to be the upset king of The Ultimate Fighter this season.

"I told people from the beginning I wasn't the 15th seed," Shelton said after his win.

With Shelton punching his ticket into the semifinals, it was time to find out who would be his opponent as Tim Elliott prepared for his showdown with Matt Schnell. With a wealth of experience under his belt, Elliott was ready for whatever Schnell had to throw at him. Add to that, Elliott knows he has such an unorthodox style that finding anybody to emulate him would be a near impossibility for Schnell and his coaches on Team Cejudo.

"I can bring in 100 guys that fight like Matt Schnell. He can't find one Tim Elliott," Elliott said.

Still, Schnell believed that he had what it would take to upset Elliott and move into the next round. Schnell also needed to get a win to ensure that Team Cejudo would be represented by two fighters in the semifinals or only Alexandre Pantoja would be left standing for the next round of the tournament. 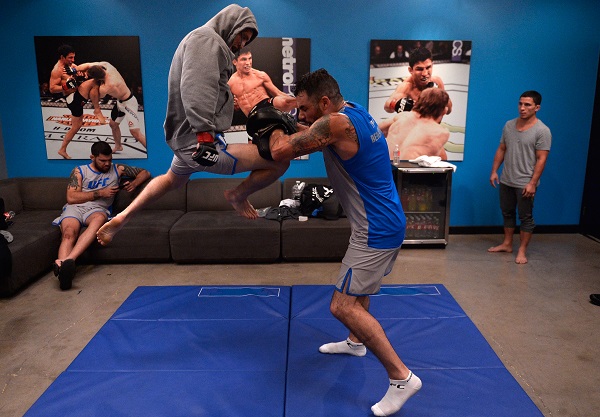 As soon as the fight started, Elliott went for a spinning strike and Schnell countered with an inside leg kick but accidentally landed with a hard shot to the groin. Elliott fell to the ground in pain as everyone watching cageside cringed in pain after a very nasty kick downstairs. Thankfully, Elliott quickly recovered and he was able to restart the fight.

Elliott wasted no time coming after Schnell with everything he had as he backed up the Team Cejudo fighter, and he just started winging huge, heavy punches. Schnell did a masterful job weathering the storm before returning fire and nearly landing a takedown on Elliott with a whizzer, but he couldn't quite maintain the position on the way to the ground. Elliott reversed and landed on top, where he started looking for punches and elbows. Schnell got into his full guard and immediately started working his way up Elliott's back as he looked for the same triangle choke that got him into the second round.

Elliott defended but Schnell quickly transitioned into an armbar and it looked like he might get the submission finish. Schnell kicked out his hips and Elliott's arm was fully extended, but the wily veteran refused to give up and instead started slamming his opponent on the ground while systematically working free from the submission. Once Elliot wiggled free from the armbar, he saw an opening with Schnell leaving his head up and neck exposed. Elliott capitalized and 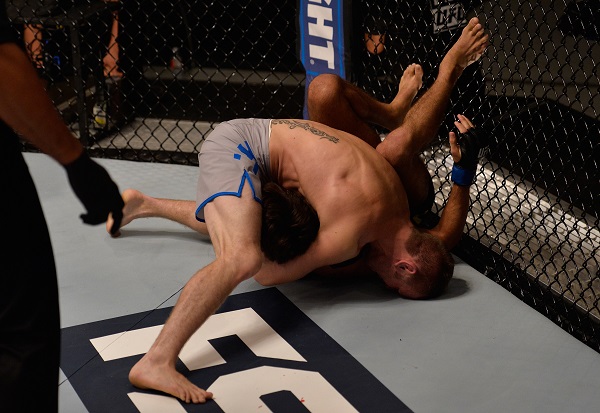 grabbed on to a guillotine choke before landing on top of Schnell on the mat. With the pressure mounting, Schnell had no choice but to tap out, giving Elliott the submission victory.

With Elliott's win, the semifinals are now set and both fights will take place on the next episode. The first fight will see No. 1 overall seed Alexandre Pantoja - and the last man standing from Team Cejudo - take on Hiromasa Ogikubo while Team Benavidez fighters will face off when Tim Elliott meets Eric Shelton in the second bout.

Who will meet in the finals of The Ultimate Fighter: Tournament of Champions? Tune in to the next episode to find out.