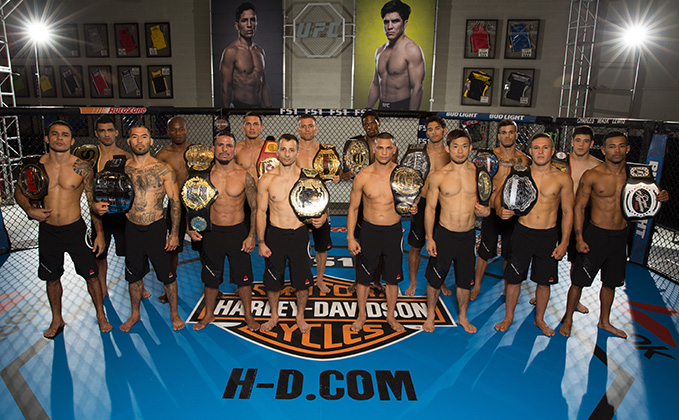 Facing flyweight champion Demetrious Johnson is a daunting task for the most experienced Octagon veteran, but 16 of the best 125-pound fighters from around the world are now poised to go through the toughest tournament in sports for that very opportunity.

The new season of The Ultimate Fighter kicked off on Wednesday night, with coaches Joseph Benavidez and Henry Cejudo leading their teams of flyweight contenders, who are all vying for the chance to earn a shot at Johnson later this year. Each fighter invited to the competition came with a title belt in hand, with those championships displayed at the house, while the athletes all look to make it through the 16-man tournament, where the UFC flyweight title is sitting like a pot of gold at the end of the rainbow.

Before they even got a chance to kick off the competition, all 16 fighters stood directly in front of Johnson, who joined the show with his title in hand to show them exactly what they were fighting for over the next 12 weeks.

"One of you guys is going to get a chance to fight me at the TUF Finale. You guys have got amazing coaches — Joseph Benavidez and Henry Cejudo — they're amazing athletes, I hope you learn something from them and I look forward to defending my belt against one of you guys on December 3 at the TUF Finale," Johnson said to them as the competition officially kicked off.

The format for this season of The Ultimate Fighter is different than most, with the exception of season 20, when the women's strawweight belt was introduced for the first time. The 16 fighters chosen were already pre-seeded according to the UFC matchmakers, so Benavidez and Cejudo made their team selections without knowing which fighters were ranked from No. 1 to No. 16. The other caveat is that once a fighter is selected by Benavidez or Cejudo, their corresponding opponent is automatically placed on the other team within the tournament format.

With that said, here's how the tournament ended up. Each fighter has their team notated next to the name, either Team Benavidez (TB) or Team Cejudo (TC)

UFC President Dana White also announced that the fights would proceed in order, with the left side of the bracket taking center stage to start the competition as No. 1 seed Alexandre Pantoja kicks things off against No. 16 seed Brandon Moreno.

That fight selection immediately caused some issues for Cejudo because Moreno is one of his teammates and training partners back at home in Arizona. In fact, when Cejudo picked Pantoja as his No. 1 overall selection and Moreno was announced as his opponent, the look of distress on his face was undeniable. So right out of the gate, Cejudo announces that he won't corner Pantoja against Moreno and he will sit on the sidelines for the first fight of the season.

As the reigning flyweight champion from the RFA — a regional organization famous for promoting fighters to the UFC — Pantoja has a lot of expectations heaped on his shoulders for this competition.

"If he wins the competition, this guy could be a legitimate threat to Demetrious Johnson," White said about him before the fight with Moreno got underway. 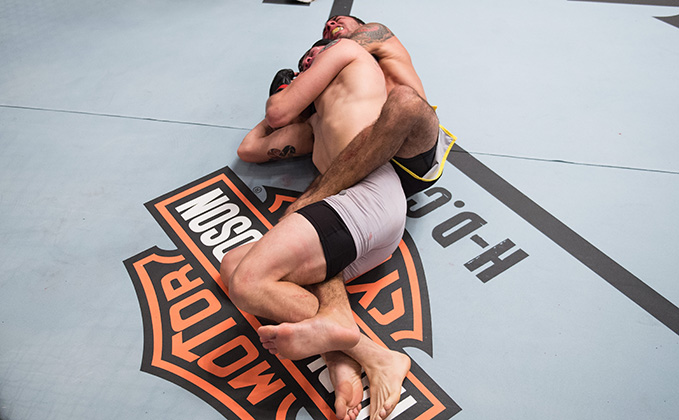 The first fight of the season saw the young upstart look very good against Pantoja early with a series of overhand punches that forced the Brazilian to chase him around the Octagon. Moreno stayed composed throughout the first round while landing some stinging punches that kept Pantoja from earning a takedown or anything really effective on the feet. Unfortunately, Moreno got a little wild in his striking towards the latter half of the opening round and it allowed Pantoja to regain the momentum a bit before the horn sounded.

In round two, Pantoja was able to compose himself after a closely contested first five minutes with Moreno, as he fired back with strong combinations while looking to take the fight to the ground. Moreno was composed and never backed down during the fight, but he made a critical error when Pantoja went for a takedown. Instead of sprawling away, he accidentally gave up his back to the submission specialist. Pantoja wasted no time taking advantage of the situation by locking up a rear naked choke that forced Moreno to tap out, signifying the end of the bout.

Alexandre Pantoja is moving onto the next round and he would find out his opponent before the end of the debut episode.

With the No. 1 seed through to the quarterfinals, the next matchup would see Alaska Fighting Championships flyweight king Terrence Mitchell take on New Zealand's own Kai Kara France in the No. 8 versus No. 9 showdown. Mitchell was an interesting prospect as he walked into the house at 5'10" — by far the tallest competitor — while France was a nasty Muay Thai striker, who trained exclusively in Thailand throughout his MMA career. 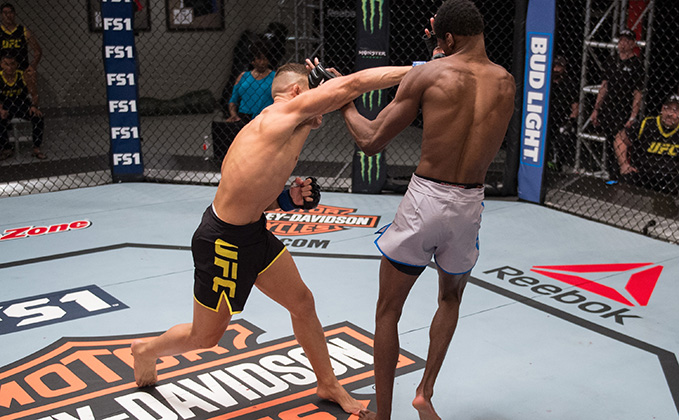 The first fight was a battle, but the second bout ended up as a one-sided beatdown thanks to France coming out of the gates with a furious pace, looking to finish Mitchell early. France immediately targeted Mitchell for a series of hard overhand rights that continuously found the mark and hurt the Alaska native during the first exchange between the two flyweights. France got an early knockdown that dazed Mitchell and he never got a chance to recover as the onslaught just continued. France saw an opening for one more huge right hand and his punch sent Mitchell flying through midair until he crashed down on the canvas and the referee swooped in to stop the fight.

Kai Kara France made a huge statement in his debut and it looks like the No. 1 seed Pantoja will have a very tough road ahead of him if he hopes to make the next round of this tournament.

The victory for France also meant Henry Cejudo's team was up 2-0 thus far in the competition through the first two fights. Benavidez will look for revenge next week when the No. 5 overall seed Hiromasa Ogikubo takes on Team Cejudo's Nkazimulo Zulu, who enters the competition as the No. 12 seed.

The tournament of champions has gotten off to a fiery start, and if these first two fights are any indication, the flyweights are going to put on a show this season. Don't miss a minute of the action when The Ultimate Fighter returns next Wednesday night with a brand new episode at 10pm ET, only on FS1.