When we last left The Ultimate Fighter, the first round of the tournament wrapped up with eight competitors moving into the quarterfinals after some incredible matchups resulted in finishes in every bout.

It was clear from the first fight until the last that the competitors on this season of the show weren't just going for the victory, but they were sending a subtle message to champion Demetrious Johnson that the winner of this tournament is gunning for his title. With the first round now wrapped up, the quarterfinals will begin in the latest episode as No. 1 overall seed Alexandre Pantoja faces No. 9 seed Kai Kara-France.

Now this matchup is interesting on several levels but, most notably, Pantoja and France are both training under coach Henry Cejudo, which means things are probably going to get a little awkward in the lead up to their showdown. Because this season was set up as a tournament, the teammate versus teammate fights were bound to happen and Pantoja vs. France won't be the last time this happens before the show wraps up.
RELATED CONTENT: Recap Episode 7

Before the fighters get focused back on the tournament, the coaches will treat them to a little party at the house to unwind a bit before the second round kicks off. The first eight fights have unfolded over a matter of weeks, so the competitors are clearly ready for a little down time and to get their minds off training for at least a few hours. Being cut off from the rest of the world is bad enough, but when life essentially goes in a constant loop of eat, sleep, train, repeat, it can get a little monotonous.

The party at the house will also give Cejudo and fellow coach Joseph Benavidez another chance to reignite their growing rivalry ahead of their matchup in December.

This week's episode will also feature the arrival of Benavidez's head coach Duane "Bang" Ludwig, who joins the show to help out the fighters and give them some of the vast knowledge that he's used to mold UFC champions.

Ludwig is the former head coach of Team Alpha Male, where he helped lead the fighters there to an unbelievable winning streak during his first year with the Sacramento-based squad. Ludwig eventually left to open his own gym in Colorado where he continued to work with several of the fighters, including TJ Dillashaw, who went on to win the bantamweight title when he knocked out Renan Barao. Since that time, Ludwig has continued to grow his stable of fighters, including Benavidez, who routinely makes trips out to Colorado to work with him ahead of his bouts in the UFC.

Ludwig will share some of that knowledge with the competitors on the show, who are thirsty to learn from a world-class coach, but his arrival will also bring some extra tension to the teams as well. It's rare that the appearance of a guest coach coming to help out the fighters will end with the coaches at odds, but this is certainly one of those moments, with Benavidez and Cejudo finding yet another reason to snap at each other this week.

Once the drama about Ludwig's visit comes to a close, it's time to focus on the quarterfinal matchup between Pantoja and France. 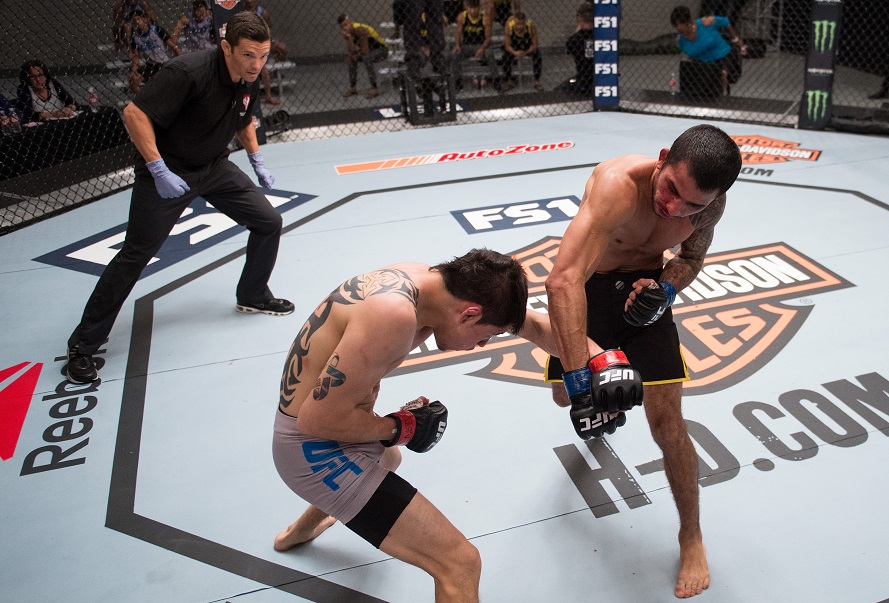 In his first round fight, Pantoja was certainly the favorite as the top seed in the tournament going up against No. 16 ranked Brandon Moreno, but the result was much closer than the odds would have suggested. Pantoja ended up going to war with Moreno before finally wrapping up a fight-finishing submission, but he certainly took some damage after spending nearly two rounds in the Octagon to kick off the tournament. Meanwhile, France had one of the most impressive showings in the opening round as he decimated Terrence Mitchell with a vicious first round knockout.

Stylistically, this fight is the classic "striker versus grappler" matchup, with Pantoja showing off world-class Brazilian jiu-jitsu while France is a high-level Muay Thai kickboxer. Of course in this day and age of mixed martial arts, no one gets to the UFC without having a few more weapons in their arsenal and that's the same for Pantoja and France.

But there's no doubt that France wants to avoid the ground game with Pantoja as much as possible. France is a top-notch striker with lightning quick speed and devastating power. He just has to let his hands go enough to pressure Pantoja and force the Brazilian to stand and trade with him while stuffing some takedown attempts.

That being said, Pantoja is a ground specialist for a reason, but he's also shown some solid striking in the past, with good hands and a rapidly improving kicking game. Pantoja can attack with a little more fluidity because he has to imagine that France won't even bother with a takedown attempt, so that opens up a lot of possibilities for the Brazilian. If Pantoja goes for a takedown early, he could also negate part of France's kicking game if he can make the New Zealand native worry about ending up on his back as a result.

Pantoja may be the favorite once again due to his experience and overall ranking, but this isn't an easy fight. He went through a serious battle last time out and with very little time to heal, he could still be feeling the after effects of that matchup with Moreno. France needs to take advantage of that, and if he can go on the attack while staying smart and aggressive, he could pull off another upset.

Find out who moves on to the next round of the tournament when Alexandre Pantoja meets Kai Kara-France on the next episode of The Ultimate Fighter tonight at 10pm ET on FS1.