It all comes down to this.

After 14 fights involving 16 of the world's best flyweight fighters, The Ultimate Fighter will determine a new title challenger at 125 pounds this week, as Tim Elliott meets Hiromasa Ogikubo in the finals of the Tournament of Champions, with the winner moving on to face champion Demetrious Johnson.

When the tournament started more than 12 weeks ago, Elliott entered the tournament as the No. 3 seed overall, while Ogikubo came in at No. 5, with both fighters being selected by coach Joseph Benavidez for his team. Last week saw the demise of Henry Cejudo's team with Alexandre Pantoja - the No. 1 overall seed - going down in defeat to Ogikubo in the semifinals.
RELATED: Recap last week's semifinals | Meet the finalists - Tim Elliott | Hiromasa Ogikubo

So the finals will be conducted without a representative from Team Cejudo, although the former Olympic gold medalist showed a lot of pride in the fighters he picked to fight in the tournament. In fact, Cejudo has stayed close to several of the fighters from his team since the show finished filming, with a few of them working with him as he prepares for his fight with Joseph Benavidez at the finale on Dec. 3. Nkazimulo Zulu actually ended up living with Cejudo while the two trained together in Arizona after the show wrapped.

With Team Cejudo eliminated, the latest episode will put the focus back on Team Benavidez, with Elliott and Ogikubo going through final preparations before meeting in the Octagon to determine the season winner.

When the fighters first arrived six weeks ago, everybody knew the road to the finale was going to be a difficult journey to endure, especially considering they would do it without the benefit of their regular coaches, teammates or the support of friends and family. Every season of The Ultimate Fighter has seen the competitors cut off from the world for the better part of six weeks while training and fighting on the show.

This week will represent a rare treat for the two finalists in season 24, as both Elliott and Ogikubo - with some special thanks to Harley-Davidson - will be able to reach out to the person that inspires them the most before meeting in the Octagon. It's a chance to connect with family and friends after six weeks in isolation and there's little doubt that it will definitely serve as inspiration for both Elliott and Ogikubo.

With time ticking away until the fight begins, Benavidez will also enjoy one more night out with his team after teaching and training alongside them for the past season. Benavidez has spoken numerous times about how the experience coaching The Ultimate Fighter will change him forever and it's clear he was very invested in the success of the competitors he selected for his team. Even with a past opponent like Elliott now training alongside him, Benavidez was proud to see everyone's development and the success his fighters had throughout the season.

Once the team dinner is wrapped up, it's time to turn everybody's attention to the fight that will determine the person who will face Johnson with the flyweight title on the line this Saturday night in Las Vegas.

Throughout the course of the season, Elliott has been one of the biggest favorites to make it to the finals not only because of his skill set but also because he's been facing top notch competition throughout his career. Elliott is a former UFC fighter who engaged in several notable battles with fighters like Benavidez, as well as John Dodson, during his time competing in the Octagon . 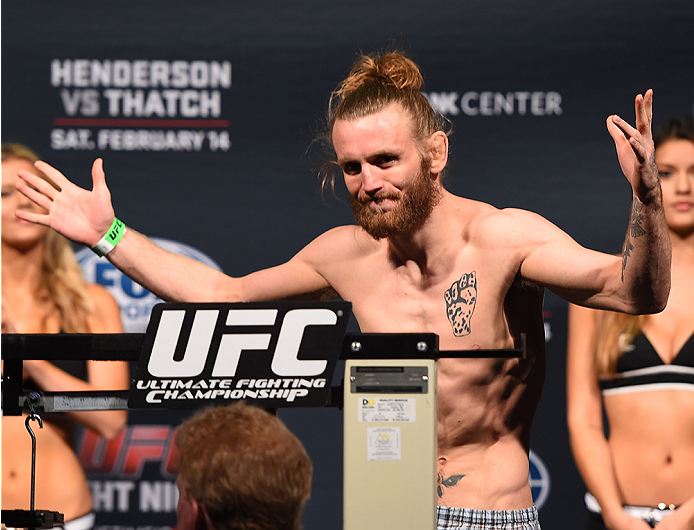 Since joining the show, Elliott has run roughshod through the competition, with two very impressive finishes in his first pair of fights, as he submitted Charlie Alaniz and Matt Schnell. Elliott faced his toughest test last week when he faced off with teammate Eric Shelton in a back and forth two round war. While it was a razor close decision, Elliott managed to get the majority decision to put him into position to fight in the finals against his teammate and training partner throughout the season.

As the Shooto Japan flyweight champion, Ogikubo came to the show with real veteran experience while facing some tough competition, including a past fight with No. 3 ranked 125-pounder Kyoji Horiguchi. Ogikubo made short work of Zulu in the first round via submission before earning a unanimous decision over upstart Team Cejudo fighter Adam Antolin. Ogikubo made it to the finals with another unanimous decision over top seed Alexandre Pantoja, and now he's one fight away from competing for the title in his UFC debut.

As far as this matchup goes, Elliott and Ogikubo is a serious clash of styles

Elliott has made his name throughout the season as one of the most unorthodox strikers and wrestlers, with unusual approaches on his feet or when he decides to take the fight to the ground. Elliott's ability to remain unpredictable has made him a very tough matchup because there's no easy way to figure out where he's going to attack next. Add to that, Elliott stands 5'7" tall, which is rather large compared to most flyweights, so he enjoys a size and reach advantage in almost all of his fights.

As for Ogikubo, he's a more traditional wrestler with a powerful top game, as well as a submission arsenal that can give anybody trouble if the fight hits the ground. Ogikubo has shown incredible control in all of his fights when dragging his opponents the mat, but he will certainly have his hands full doing that to Elliott over three rounds. If Ogikubo can manage to put Elliott down early and keep him there, that could be a huge momentum shift for the Japan native.

When it's all done, only one man will be left standing. Who will it be - Tim Elliott or Hiromasa Ogikubo?

Tune in to The Ultimate Fighter season 24 finale tonight at 10pm ET to find out who is moving on to the championship main event against Johnson this weekend.