For the first time ever, The Ultimate Fighter reality series will feature 16 champions, not prospects, vying for a shot at something each of these fighters crave - the UFC flyweight championship held by Demetrious Johnson

The last time this scenario unfolded it was The Ultimate Fighter season 4, titled “The Comeback.” That season was filled with Octagon veterans who had left the promotion but had the chance to earn back a spot on the roster while simultaneously getting a shot at a champion after winning the show. No one will ever forget the culmination of that historic season, because Matt Serra went on to knock out Georges St-Pierre and become the welterweight champion after first winning The Ultimate Fighter.

So it's clear the 16 fighters competing in this tournament have a tremendous opportunity to earn a shot at the flyweight title, and any one of them could pull off the same kind of upset Serra did eight years ago.

To help guide them this season, former flyweight title contenders Joseph Benavidez and Henry Cejudo will form teams and coach the fighters throughout the tournament, with the winner then moving on to face Johnson. Benavidez has already faced Johnson twice during his career and while he's come up short on both occasions, he's given "Mighty Mouse" everything he could handle whenever they've squared off in the Octagon. Cejudo also came up short in his bid to take the title away from Johnson when they met earlier this year, but the former Olympic gold medalist knows he can pass along some knowledge to these fighters with hopes that they could possibly pull off the upset against the only champion the division has ever known.

The 16 fighters selected this season come from all over the world, with each one of them holding a title from a different promotion, which they will represent by bringing the championship belts into the house. The UFC matchmakers didn't make their selections for this season just based on promotions in the United States and they certainly didn't mind a language barrier getting in the way because the entire point of this tournament was trying to find the one person in the world who could potentially beat Demetrious Johnson.

The eclectic group of competitors joining the show this season will be decorated by several familiar names as well.

Tim Elliott is not only the Titan Fighting Championship’s flyweight titleholder, but he's also an Octagon veteran who actually faced off with Benavidez during his UFC career. Elliott holds a win over former UFC lightweight champion Jens Pulver, and since leaving the promotion he's gone 3-0 while also becoming the Titan FC champion.

Damacio Page is another veteran who will look familiar to most fans after his stint in the UFC and WEC between 2008 and 2012. During his time between the two promotions, Page fought a who's who list of top competitors and he's actually shared the Octagon with Demetrious Johnson previously as well as Brad Pickett and Alex Caceres. Now at 33 years of age with more experience than anyone in the competition, Page is looking to make one last run at the UFC title while representing Legacy Fighting Championships out of Texas.

Former reality television star Matt Schnell will also join the cast this season as a flyweight representing Legacy FC as well. Schnell first made waves on the MMA scene while appearing on "Caged," a reality TV series from MTV. The Louisiana native, who is close friends with lightweight contender Dustin Poirier, has been pegged as a rising star for several years, and now he'll get his chance to prove why in the toughest tournament in sports.

There will also be fighters joining the show from Japan, South Africa, New Zealand, Brazil and several other locations from around the world as the UFC scoured the globe to find the best talent for this flyweight tournament. 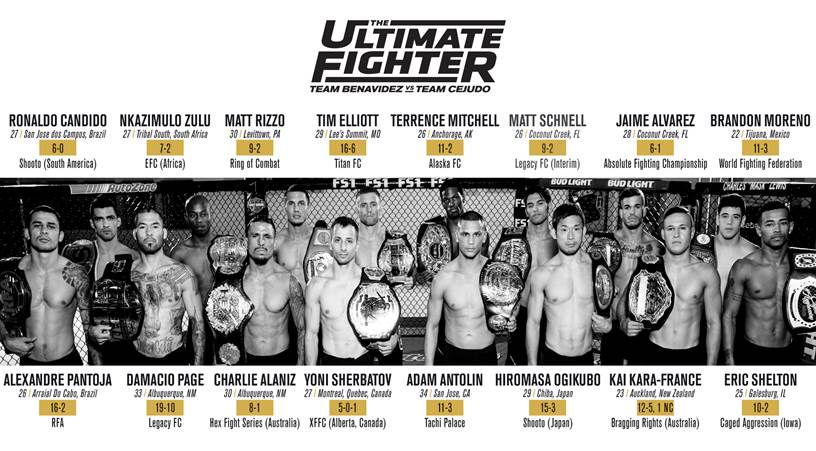 And, of course, Johnson will be on hand during the first day the fighters arrive at the gym to officially welcome them to the competition and give them a good luck speech because whoever wins this tournament will certainly need it if they hope to take "Mighty Mouse" off his throne.

Once the fighters are introduced and they meet the coaches, it's then up to Benavidez and Cejudo to put everybody through a series of workouts before selecting the teams. Obviously, because so many of the competitors on the show this year have vast bodies of work, Benavidez and Cejudo have already done a lot of homework coming into the season, but these last minute evaluations may show who came in ready to fight the right way, if there are some concerns with weight cutting and who actually has the best shot of winning this competition.

There will be no rest for the weary either, because as soon as the fighters are divvied up into their respective teams, Benavidez and Cejudo have to start getting them ready immediately because the first episode of the new season will feature the first two fights in the tournament.

Needless to say, the 125-pound fighters move with a furious pace that's unmatched in the UFC, and these competitors all know that this is a golden opportunity that only comes around once in a lifetime. If the first two fights that unfold on the opening episode are any indication, this is going to be a fiery and explosive season.

Don't miss the debut episode of The Ultimate Fighter: Tournament of Champions when it all gets underway tonight at 10pm ET with a special two-hour debut on FS1.