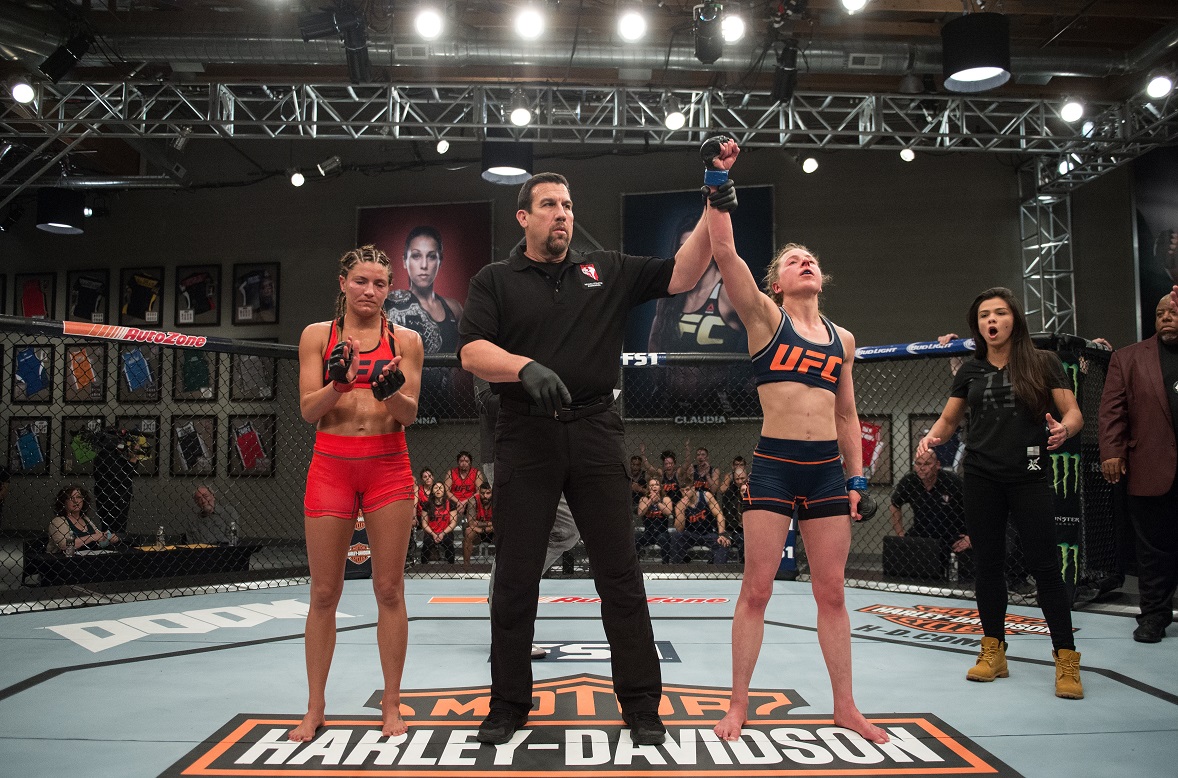 The semifinals are set on The Ultimate Fighter, as Kate Jackson earned a decision win over Ashley Yoder to close out the opening round for the strawweights and determine the elite eight.

The win for Jackson moved Team Claudia to a 7-1 in the competition, while strawweight champion Joanna Jedrzejczyk will send just one fighter - Josh Stansbury - into the next round of the tournament. It's been a good run for Claudia Gadelha thus far, but now she's going to be faced with the reality that almost everyone from her team will be facing a training partner as the semifinals kick off one week from now.

Before the semifinal announcements were made, Cory Hendricks found out his fate after a long, grueling week dealing with a shoulder injury that not only prevented him from training, but also kept him from even being able to get a good night's sleep. Hendricks fought and clawed to avoid going to the doctor, but the pain he was suffering through was just too intense for him to avoid a physician's visit and ultimately an MRI to diagnose the problem.

At one point this week, UFC President Dana White even wandered into the hallway at The Ultimate Fighter gym where he found Hendricks laying on the floor with his body contorted into the only position where he wasn't feeling extreme pain. It all came down to a doctor's visit later in the day as the other light heavyweights started thinking about taking his position if he was injured and unable to continue.

Hendricks got some much needed good news once the doctor visited, however, as he was given his diagnosis and it looks like he'll be allowed to continue into the semifinals. It turns out that Hendricks had a bulging disc that was pressing on a nerve in his neck and that's what has been causing the extreme bouts of pain he's dealing with currently. So the doctor prescribed rest as well as Ibuprofen for the pain, but due to drug testing restrictions, Hendricks won't be allowed to receive anything more significant until the show is over.

If there's a positive side to this ordeal, it's that Hendricks only needs to win his next fight and he'll make it into the finals before he will likely take some much needed time off before the card takes place on July 8.

Before the fight took place this week, coaches Joanna Jedrzejczyk and Claudia Gadelha took center stage as they started ramping up training for their own fight taking place on the same night at The Ultimate Fighter Finale.

Jedrzejczyk defeated Gadelha by a very narrow, split decision in their first meeting in late 2014 and now they will meet again, but there is certainly no love lost between these two rivals. A season spent together coaching on the show has only furthered the disdain shared between Jedrzejczyk and Gadelha as they prepare for July 8.

"I want to fight her five rounds and beat her badly. Second by second. Round by round," Jedrzejczyk said as she trained under the watchful eye of her coaches at Drysdale MMA in Las Vegas. "B---h, I'm going to cut your head July 8. Be ready."

Gadelha moved her training camp to Las Vegas for six weeks while filming the show to get ready for her rematch with Jedrzjeczyk. At home, Gadelha trains at Nova Uniao alongside legendary fighters like Jose Aldo and Renan Barao and she's been champing at the bit ever since her first fight with Jedrzejczyk to get a shot at redemption. It's clear that the first fight still gets under Gadelha's skin and she wants nothing more than to rectify that loss and take home the title at the same time.

Needless to say, Jedrzejczyk vs. Gadelha will be one of the can't miss fights of the summer.

But before the coaches square off, they first have to finish out the show this season, and ahead of the semifinals, Kate Jackson had to battle Ashley Yoder in the final preliminary round matchup at 115 pounds. 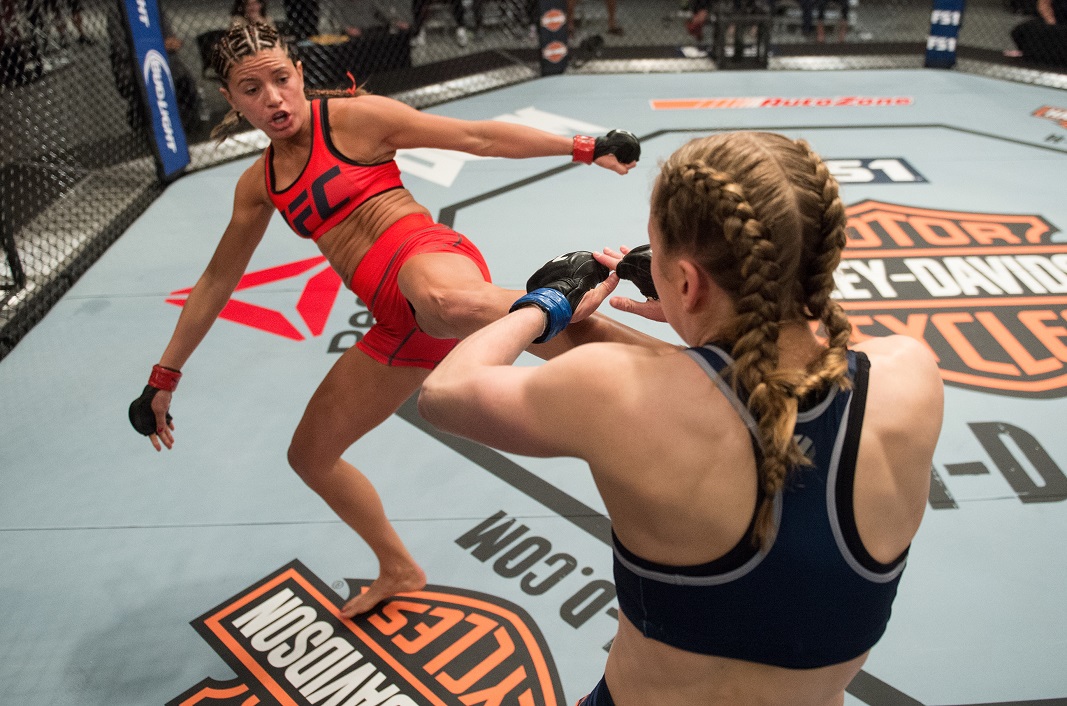 As the fight started, Jackson wasted no time taking Yoder to the ground, but almost immediately, she started fending off submissions from the bottom. Yoder began fishing for her signature armbar, but Jackson defended well and made her opponent pay for it with a series of hard hammerfists from the top. Still, Yoder did a good job re-positioning her hips several times as she continued to look for the submission, but Jackson stayed calm and patient and never gave up position. The two fighters ended up in a stalemate for a large part of the round, but Jackson landed more damage while Yoder constantly looked for the submission.

In round two, Jackson once again took advantage of a misstep from Yoder and landed on top as the fighters hit the ground, but the action was almost non-existent through the first couple minutes. The referee finally stood them up, but it was clear both fighters were pretty exhausted at this point. Jackson seemed to land the better shots whenever the two exchanged punches, but it was another close round when it was over.

The judges didn't see a reason for a third round and declared Jackson the winner by unanimous decision, which put her into the semifinals alongside six of her teammates from Team Claudia. With the opening round now completed, White wasted no time announcing the next matchups in the semifinals. 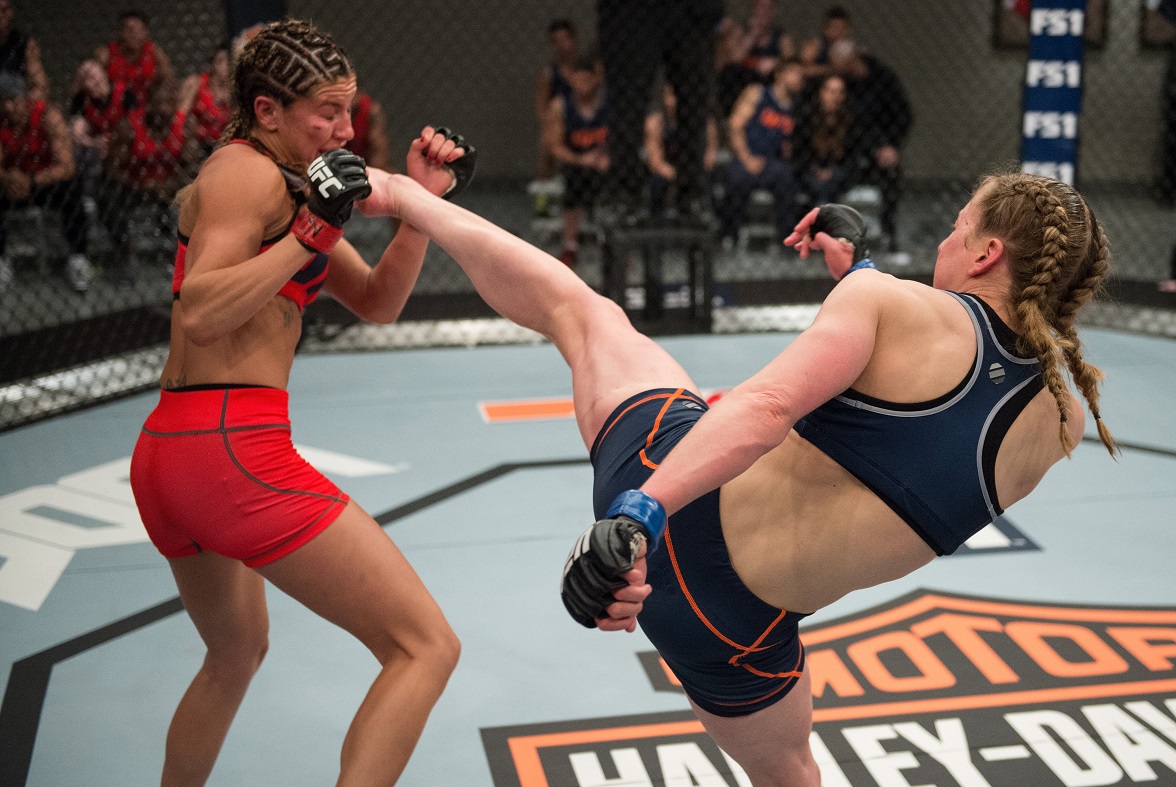 It's almost all Team Claudia in the semifinals except for Josh Stansbury, who faces a banged up and injured Cory Hendricks with a chance to push through for Team Joanna. Things kick off next week as the semifinal round gets underway and The Ultimate Fighter cruises towards the final three weeks before the finale.