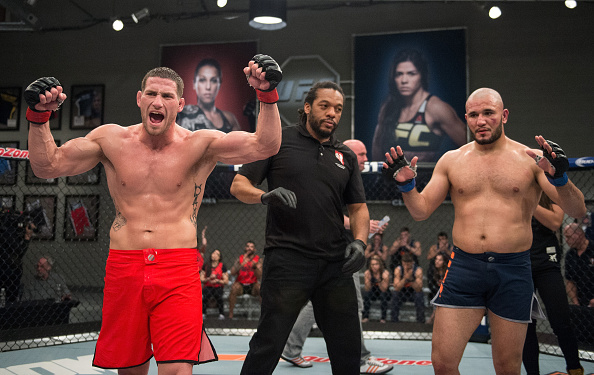 It's time for the last preliminary fight in the opening round of The Ultimate Fighter, as the strawweights take center stage again, this time with British fighter Kate Jackson from Team Claudia taking on Ashley Yoder from Team Joanna.

The fight comes one week after Team Joanna finally got on the board after Josh Stansbury defeated Abdel Medjedoub in the final fight in the light heavyweight division ahead of the semifinals. It had been an extremely rough season up to that point for strawweight champ Joanna Jedrzejczyk, whose team started the competition 0-6 before Stansbury earned a unanimous decision win to ensure the group wouldn’t end up as the first team in show history to get swept through the preliminary round.

While the pressure is somewhat alleviated thanks to Stansbury's win, Team Joanna desperately wants a second victory, because otherwise the strawweight champion of the world won't send a single fighter from 115 pounds into the next round of the tournament. To get the job done, Jedrzejczyk is going to depend on Yoder to go out and beat a former opponent.

Before Jedrzejczyk was the best strawweight fighter on the planet and Kate Jackson was a member of Team Claudia, the two actually squared off in a bout back in 2013. On that night, Jedrzejczyk defeated Jackson via second-round TKO, which stands as the British fighter's last defeat before going undefeated through her next four fights leading up to The Ultimate Fighter. Because they fought each other before, Jedrzejczyk didn't seem to have much interest in coaching Jackson, but now she's forced to go against her as she tries to get Yoder ready to face one of the strongest competitors on the show.

Jackson is a physically powerful strawweight with good hands and solid wrestling. In her seven career wins, Jackson seems to prefer striking with her opponents over grappling, but she does have submission victories on her resume. Jackson is also one of the taller fighters on the show, but that height and reach advantage will be negated by Yoder, who is actually an inch taller than her British counterpart.

Yoder is a rising prospect out of Temecula, Calif., where she trains alongside UFC legend Dan Henderson. Yoder is 4-1 as a pro with six more fights on her amateur resume and she's fought some good competition along the way, including current UFC strawweight Jocelyn Jones-Lybarger. Yoder has won her last three fights and she's got a very slick armbar submission from the top or bottom, so if the fight hits the ground, look out for her considerable skills on the mat.

Before the fight gets started this week, Cory Hendricks finds out his fate after a neck and shoulder injury put him on the sidelines for several days. Hendricks complained of the injury while in training and afterwards it got so bad that he could barely sleep thanks to the extreme discomfort he was feeling in his arm and neck. Hendricks ended up having some alternative treatment done, including acupuncture, but the relief was short lived and it forced the Team Claudia fighter to concede and go to the doctor.

Hendricks had an MRI done last week and the doctor will deliver a verdict on whether or not his injury is severe enough that it could knock him out of the competition. If Hendricks is knocked out of the tournament due to injury, it could open the door for a few different light heavyweights who could be pulled in to replace him. Khalil Rountree, Myron Dennis and Abdel Medjedoub could all be options, and they will all likely start preparation just in case they get the call. It would be a devastating setback for Hendricks after his first two wins in the house, but injuries happen and the show must go on.

This week's episode will also take an inside look at the training camps for both coaches and the rivalry that fuels Joanna Jedrzejczyk and Claudia Gadelha.

While the two of them have been teaching and training the next generation of fighters on the show, Jedrzejczyk and Gadelha have also been preparing behind the scenes for their upcoming rematch on July 8 in Las Vegas with the strawweight title on the line. The last time they met in 2014, Jedrzejczyk got the better of Gadelha by split decision, although it was a very close call after three rounds.

When the fight started, Jedrzejczyk landed her best shot of the fight with a clubbing punch that dropped Gadelha to the mat. Jedrzejczyk followed up and tried to get the finish, but Gadelha was able to gain her composure and ride out the round without taking any more serious damage. In rounds two and three, Gadelha was able to get the fight to the ground multiple times while stifling Jedrzejczyk's offense on the feet. Jedrzejczyk still kept firing back whenever she could, and when the final horn sounded there was no doubt the judges had a tough job to make the right call.

Now, two years later, Jedrzejczyk is the reigning champion and she's looking for her third straight successful title defense as she faces Gadelha again. There's obviously no love lost between these two fighters, and if this season has been any indication, things are very personal between Jedrzejczyk and Gadelha.

After the fight wraps up between Jackson and Yoder, UFC President Dana White will announce the semifinal round matchups in the men's and women's divisions. Team Claudia already has six semifinalists, so no matter what happens between Jackson and Yoder, at least a couple of them are going to be forced to fight each other. For all the early success, Team Claudia might face implosion if they get seven fighters into the next round of the tournament, which means almost everybody will be fighting a teammate or training partner to make it to the finale.

How will it play out? Will Team Joanna get at least one strawweight to the next round? Tune in to The Ultimate Fighter tonight at 10pm ET on FS1 to find out.