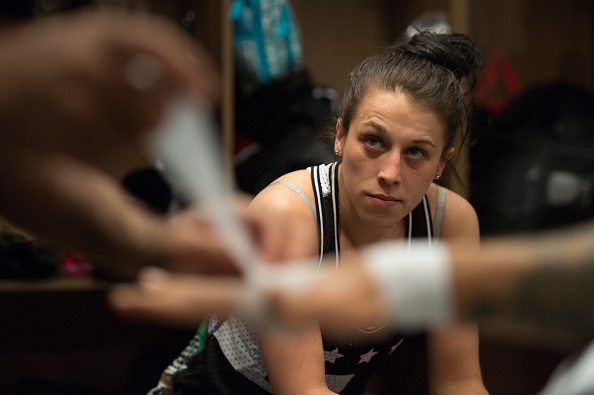 It's down to the final two fights in the preliminary round of The Ultimate Fighter, with Team Joanna still searching for their first win as Josh Stansbury looks to take out Abdel Medjedoub in the final bout in the men's light heavyweight division.

It's been a rough road for Team Joanna ever since Khalil Rountree suffered a submission loss to his pre-show teammate Cory Hendricks in the first fight of the season. Rountree looked like an early favorite after his brutal knockout to get into the house, but he couldn't take out Hendricks in the opening fight, and momentum has been on Team Claudia's side ever since.

Now it comes down to the fight two fights for one of Team Joanna's remaining fighters - Josh Stansbury and Ashley Yoder - to get at least one win to keep Team Claudia from completing the first ever sweep in Ultimate Fighter history. Considering the fierce rivalry between strawweight champion Joanna Jedrzejczyk and Claudia Gadelha, having bragging rights like that would certainly play a few mind games going into their title fight rematch on July 8 in Las Vegas.

Before the fight kicks off this week, the competitors in the house are reminded how fragile this opportunity can become after several weeks of hard training and fights, because the body sometimes breaks down and can't continue. There have been numerous occasions in the past where a fighter was forced out of the competition due to injury after the show had already started. As teased at the tail end of last week's episode, Cory Hendricks is hoping that the same fate doesn't await him after he suffered a shoulder and neck injury that hampers his training heading into the episode this week.

Hendricks has been banged up all season long after a hard fight to get into the house, with his feet being swollen so severely it appeared like he might have broken something. Still, Hendricks found a way to defeat Khalil Rountree in the preliminary round matchup and it looked like would finally get some time to rest and recover since he was the first fight of the tournament.

Unfortunately for Hendricks, his string of bad luck continues into this week as his neck and shoulder start to deteriorate to the point where it's beginning to affect his training. The last thing any fighter wants to hear is that they are going to be forced to see a doctor during the competition, because that can quickly get them pulled from the fight without much of an option to continue. So as Hendricks tries to find a way to fight through the pain, he calls on some alternative medicine to help him try to push through so he can still fight in the semifinals. The injury is undoubtedly affecting him on a daily basis, so Hendricks will hope the treatment helps because if not, a doctor's visit likely awaits him and then his future with The Ultimate Fighter will lie in someone else's hands.

Speaking of injuries, no one in the house this season knows the tragedy of that situation better than Josh Stansbury. The Ohio native looked like a lock to make the cast of The Ultimate Fighter season 19 in his opening round fight against Chris Fields when a takedown went horribly wrong and Stansbury suffered a broken leg. It was an incredibly tough moment for the veteran fighter as he went from winning a bout to get him into the house to leaving the show entirely after the injury.

Stansbury battled back from the broken leg where he entered the season with a 7-2 record, including a win over season 19 competitor Dan Spohn. Heading into the show, Stansbury had to be one of the odds-on favorites to make it deep into the tournament, but now he enters his fight with Medjedoub as one of the last hopes for Jedrzejczyk to produce a winner this season.

Stansbury is a very well rounded fighter with good striking, wrestling and submission skills. His guillotine choke is legendary, as Stansbury has finished four opponents with the submission and he has no fear of going to the ground with anyone. Stansbury made short work of his first opponent to get into the house, putting Trevor Carlson away with a first round keylock. Now Stansbury finally has the chance to redeem himself after the injury forced him off The Ultimate Fighter season 19.

On the other side of the Octagon stands Abdel Medjedoub, who has gotten a lot of screen time this season but not for the reason he hoped for when he signed up to be part of the show. Medjedoub saw his personal life land front and center this season after his wife called from home in Montreal and told the producers that she needed to speak to her husband due to an emergency. While details about the situation were never revealed, Medjedoub was given an ultimatum - return home to deal with the situation with his wife or she was going to leave him immediately.

UFC President Dana White made the call to allow Medjedoub to go home for a few days to deal with his marital situation and then return to the show. When he came back, Medjedoub vowed to win the entire series as a promise he made to his wife after leaving Montreal to return to Las Vegas.

Medjedoub certainly has the tools to live up to that promise.

Medjedoub is a versatile striker with good boxing and solid power in both hands. At home, Medjedoub trains with the Tristar team, which is a powerhouse gym where former welterweight champion Georges St-Pierre, as well as top contender Rory MacDonald, both train. Clearly, Medjedoub has the right people around him to get ready for the competition, but he's got a stiff test awaiting him in Stansbury.

Can Medjedoub keep the streak going for Team Claudia or is Josh Stansbury the perfect foil to finally get Team Joanna on the board? Tune into The Ultimate Fighter tonight at 10pm ET on FS1 to find out.