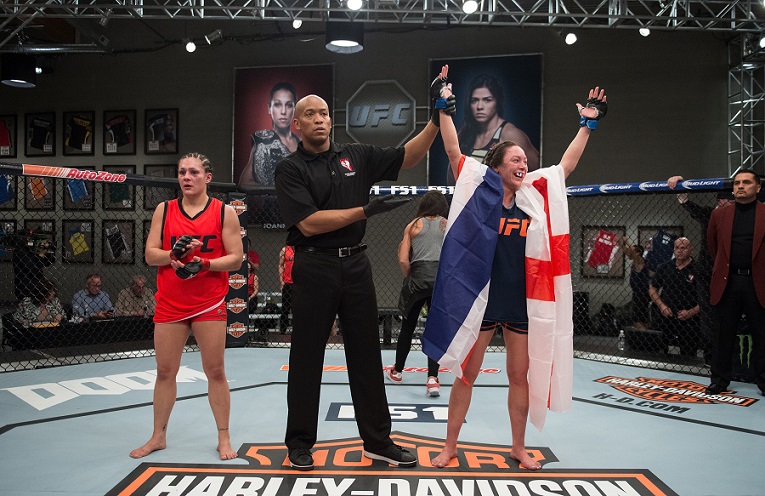 It's a new week but the same story for Team Claudia, as they continue to dominate the latest season of The Ultimate Fighter. On Wednesday’s episode, Lanchana Green got a decision victory over Helen Harper in a three-round battle in the women's strawweight division.

Thus far, Team Claudia has been unblemished with a perfect 4-0 record, and there's no doubt that's rubbing Joanna Jedrzejczyk the wrong way.

Last week, Jedrzejczyk erupted on her team with a very loud tantrum aimed directly at their training habits and the amount of effort they were putting forth in the gym. Unfortunately, her venom didn't result in a win, as Myron Dennis fell by decision to Andrew Sanchez. This week, Jedrzejczyk decided to switch things up again and offer her team some additional assistance, with former strawweight champion Carla Esparza coming in as a guest coach.

Esparza is a phenomenal wrestler and she seemed like the perfect person to help Harper get ready for her fight with Green. When she finally sat down with Harper to talk about strategy, the British strawweight admitted that her style isn't always pretty but it gets the job done. Harper described herself as a rhino that charges forward and continues to pour on the punishment until her opponent can't take it anymore.

All season long, Harper has been facing an emotional crisis after dealing with a bout of bronchitis early on and then an elbow injury after a grappling session gone wrong. Despite those setbacks, Harper sounded supremely confident going into her fight this week and that impressed Jedrzejczyk, who was admittedly a little worried ahead of the matchup with Green.

"There's no way I'm walking out of that cage without my hand being raised," Harper said.

Both Harper and Green shared their stories about how they became fighters this week and they were equally heart-wrenching tales of survival. For Green, she decided to become a fighter after she was beaten up badly by a group of girls in her hometown, and following her recovery, she decided to start training so she'd never lose a fight again.
RELATED CONTENT: Ep. 5 Fighter Blogs - Amanda Cooper | Eric Spicely | Get to know Ep. 5's fighters - Lanchana Green | Helen Harper

As for Harper, she was mired in a terribly abusive relationship that eventually forced her to begin training as a way to defend herself. Martial arts not only gave Harper the confidence that she could stop her boyfriend from abusing her, but it also made her realize that she was so much stronger than she ever realized. Harper eventually escaped the relationship and then decided to pursue a future in fighting with all the new skills she had gained.

Outside of the fight this week, Abdel Medjedoub became the center of attention after he was contacted by the producers of the show who told him that his wife had called to report an emergency at home. Typically, fighters aren't allowed to speak to anyone from the outside word for the duration of filming, but Medjedoub's wife told producers that it was a matter of life and death and she had to speak to her husband.

Medjedoub got on the phone with his wife and while details of the conversation were kept mostly private, the light heavyweight fighter admitted to doing something quite bad before leaving for the show and it left his wife on the brink of asking for a divorce. She was demanding that Medjedoub return home now or she wouldn't be there when he got back after The Ultimate Fighter was finished filming. Medjedoub was left with a monumental decision to make: either stay in the competition with hopes of making it to the UFC or leave to deal with his relationship and risk never getting a call back to the big show.

It's clear that Medjedoub was an emotional wreck, and he'll have to make a decision soon, as his number to fight will soon be called.

As for the matchup this week between Green and Harper, this fight lived up to expectations and more as these two battle-hardened strawweights went to war for three straight rounds. 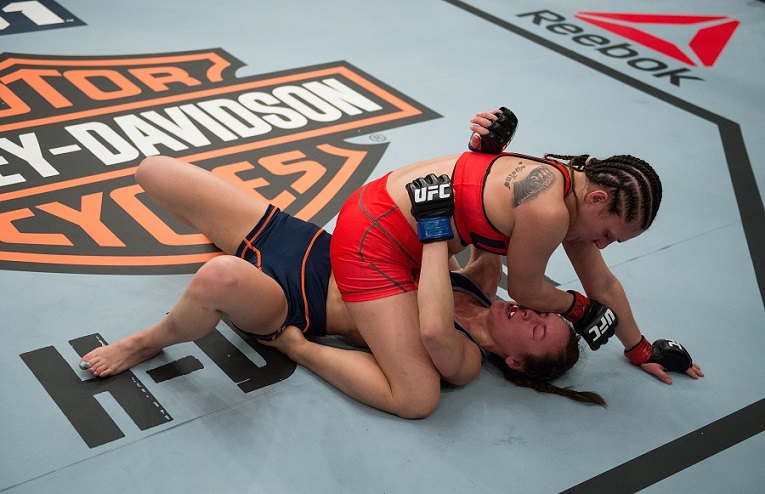 As expected, Harper came charging out of the gate like a bull trying to overwhelm Green immediately, but instead she started eating counter shots every time she pressed the action. Green did a fantastic job throughout round one, circling away from Harper's aggressive attack while popping her with punches during every exchange. Green never put Harper in any serious trouble, but it was clear after round one was over that she was the victor.

Round two started much the same way, with Green landing the better strikes while Harper desperately looked for the takedown. The momentum of the fight shifted dramatically when Harper finally dragged Green to the canvas and started unleashing a powerful ground attack. Harper was unrelenting as she punched away at Green from the top while continuously advancing her position. Eventually, Harper got to the mount, where she looked to put Green away, but the Team Claudia fighter survived and it was clear a third round was on the horizon.

Unfortunately for Harper, that effort to go for the finish in round two nearly zapped all of her energy and despite her best attempts, she couldn’t get Green back to the mat and hold her there in the third and final round. Green once again displayed great movement as she landed counter shots while cracking Harper with a series of stiff punches throughout the five-minute session.

When it was over there, was no doubt that Green had done enough to get the victory and she earned a decision victory to eliminate Harper from the competition while putting Team Claudia up 4-0 in the tournament. 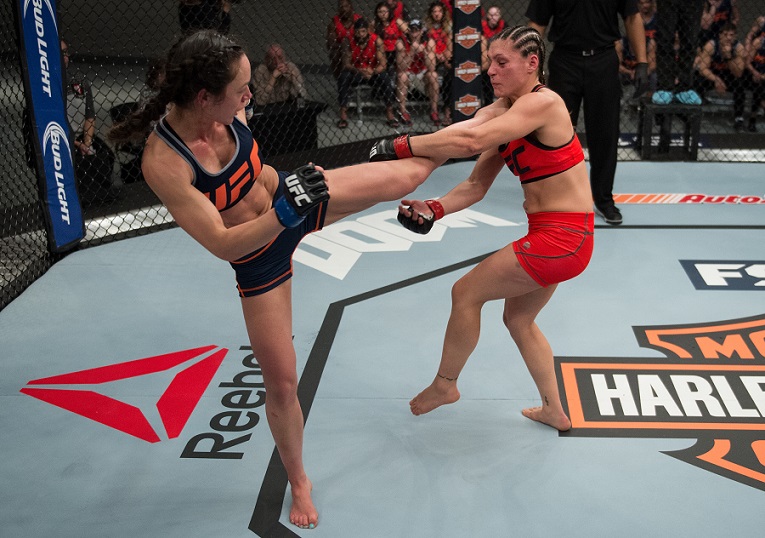 During the celebration after the win, Gadelha went around and shook the hands of all the opposing coaches and fighters but dismissed Jedrzejczyk when they passed each other by. That was no oversight, as Gadelha clearly avoided shaking Jedrzejczyk's hand, and that angered the strawweight champion like you wouldn't believe.

"I'm glad she didn't touch me with her dirty hand," Jedrzejczyk said after Gadelha refused to shake her hand.

Jedrzejczyk taunted Gadelha ahead of the next fight selection, promising to show her opponent what respect really means when they face off on July 8. Gadelha still got the last laugh, however, with her team still undefeated in the competition.

With the fifth fight selection still in her control, Gadelha selected top grappler Eric Spicely to face Elias Urbina, who was the final fighter chosen after the elimination round fights. Gadelha already picked off some of Jedrzejczyk's top fighters and now she's just looking to run the table from start to finish.

Can Elias Urbina find a way to win to bring Team Joanna their first victory this season or is Team Claudia destined to stay undefeated with another win in the light heavyweight division as Eric Spicely looks for the victory? Tune into The Ultimate Fighter next Wednesday night at 10pm ET on FS1 to find out.