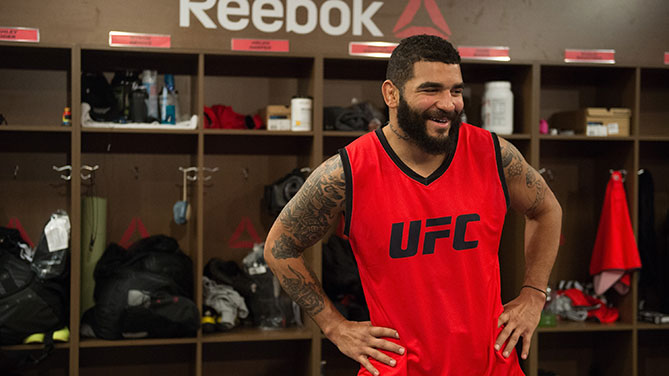 It’s another week down on The Ultimate Fighter and another loss for Team Joanna, as Andrew Sanchez dominated Myron Dennis for two rounds en route to a third straight victory for Team Claudia.

It seemed like a must win situation for strawweight champion Joanna Jedrzejczyk, who launched into an expletive-filled tirade aimed at her team this week following two less than impressive performances turned in by Khalil Rountree and JJ Aldrich. Jedrzejczyk was so fired up that she put her team through a rigorous workout and pushed them harder than they had ever been pushed before while trying to get the results out of them that she needed.

Jedrzejczyk's disgust was quite evident throughout the training session as she berated her team to push harder and try to imitate the same kind of work ethic that helped earn her the UFC strawweight title. Even after the training session was over, Jedrzejczyk's ire grew as she continued to verbally assault her team while they could only sit there with heads held low while trying to figure out a way to avoid a third straight defeat.

"I think everyone trains like a (expletive) compared to Joanna," Helen Harper said about the team's efforts thus far.

Jedrzejczyk was clearly perturbed and she wasn't letting up until everybody on her team got the point.

"I'm so angry. They broke my heart," Jedrzejczyk said. 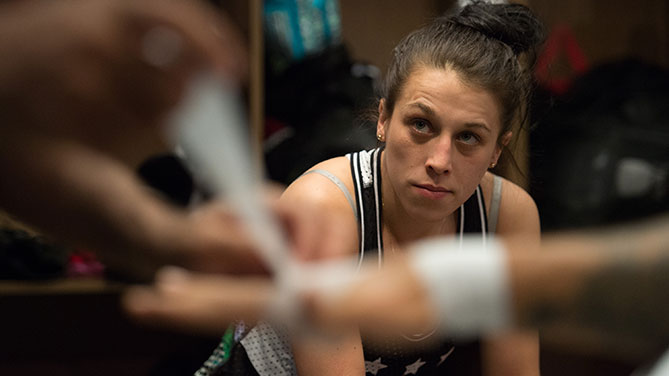 Jedrzejczyk's anger didn't let up during the next day's training session either, after her team arrived at the gym while Gadelha and her crew were still clearing out of the facilities. What started out as a joke with Khalil Rountree showing up in a referee's uniform yelling at Team Claudia to clear out of the space so Team Joanna could start practice quickly escalated once the coaches got involved.

Jedrzejczyk stormed into the gym and told Gadelha to move faster as she packed her bag and prepared to leave. Gadelha continuously laughed at Jedrzejczyk, who went from serious to downright angry as she watched her rival take her time getting her gear together before exiting the facility. Maybe it's the losing streak finally getting to her, but Jedrzejczyk is clearly showing a lot of emotion any time Gadelha is around, and even UFC President Dana White is starting to notice just how upset the strawweight champion has become lately.

He's not sure if Gadelha is getting under her skin on purpose or just accidentally, but either way, it's leaving Jedrzejczyk in a highly agitated state.

Meanwhile, Gadelha is clearly enjoying her time on the show, not only because she's getting the better of Jedrzejczyk during the competition, but she's embracing her role as coach of a team of eight up and coming hopefuls as well.

"I want to take care of them like they are my babies," Gadelha said about her team.
RELATED CONTENT: Fighter Blogs - Ep. 4: Amanda Cooper | Eric Spicely

This week, Gadelha even stopped by the house with food to treat the cast members to a Brazilian barbecue. Considering the fighters are typically stuck in the house for every hour of the day outside of trips to the gym, occasions like these mean a lot to break up the monotony of everyday life that only consists of waking up, eating, training, eating and back to sleep again.

Once the food was finished, it was time to turn the focus back on the fight this week between Sanchez and Dennis.

Sanchez was an upset pick early in the competition after he eliminated highly touted prospect Phil Hawes in the opening round, but despite that victory, he understands that he's going to remain an underdog in most of his matchups due to his size. Even a day away from the weigh-ins, Sanchez only hit the scale at around 199 pounds, so it's clear he could probably cut down to middleweight without much problem. That means he's going to be outsized in most of his fights this season, but Sanchez sees it as an advantage because while the rest of the fighters are worried about cutting weight, he can focus on his technique and conditioning, and that could bode well for him the deeper he goes into the tournament.

Meanwhile, Dennis had to sit through a faux Valentine's Day dinner along with a picture of his wife, who is at home with a baby on the way while he's trying to live his dream on The Ultimate Fighter. It's tough for Dennis to be away from his family, but he knows it will all be worthwhile if he gets through the show and earns his way into the UFC.

Dennis had a lot of confidence going into the fight with Sanchez, knowing that he had a size and power advantage with the ability to end his night with one punch. Unfortunately for Dennis, that opportunity never came because Sanchez had a clear game plan to put him on the mat as soon as the fight began.

Sanchez did a great job gauging distance and staying away from Dennis' power before swooping in for a takedown in the opening moments of the fight. Dennis was able to get up a couple times during the round, but each time he managed to return to his feet, Sanchez was just as quick to put him back down again. It was a stifling first round for Sanchez, who kept Dennis on the canvas throughout the opening five minutes. 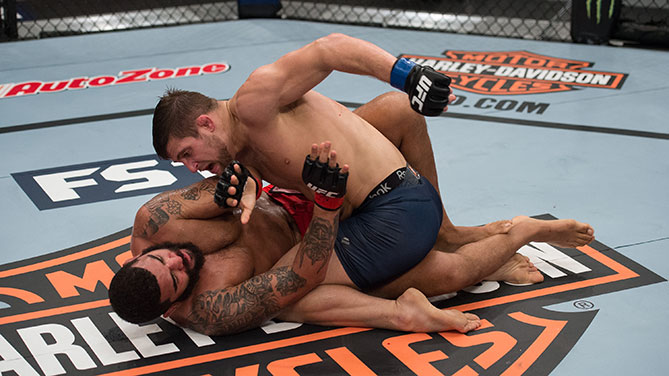 The second round actually gave Dennis an early opening as Sanchez abandoned the takedown and stood on the outside striking with the former kickboxer. Despite the chance to showcase his knockout power, Dennis hesitated and refused to pull the trigger, instead taunting Sanchez without actually connecting on anything significant. Finally, halfway through the round, Sanchez once again caught Dennis sleeping and put him on the ground.

From there, it was all Sanchez as he continued to press Dennis into the mat, and while he wasn't able to wrap up a submission, it was clear when the fight was over that he was victorious. Once again, Team Gadelha celebrated a victory while Team Joanna sat in the hole at 0-3 thus far in the competition.

With the fight selection still in her control, Gadelha decided to go with strawweight knockout artist Lanchana Green for the next fight as she takes on fellow Brit Helen Harper.

Harper has been struggling thus far on the show, dealing with a bout of bronchitis as well as an elbow injury suffered a week ago. This time it looks like Gadelha is trying to pick off one of Jedrzejczyk's weaker links as she tries to slam the door shut with a 4-0 start to the season.

Can Team Joanna find a way to get Harper the win or will Team Claudia continue to storm through the competition undefeated? Tune into The Ultimate Fighter next week to find out.