Winning isn't everything, but it's really the only thing that matters on The Ultimate Fighter, and thus far, strawweight champion Joanna Jedrzejczyk hasn't experienced any of that with her team down 0-2 in the competition.

There's little doubt that Jedrzejczyk is one of the most competitive people on the entire UFC roster, so losing isn't something she's accustomed to, but matters are made worse because her team keeps falling to her rival, Claudia Gadelha.

The first fight of the season saw one of Jedrzejczyk's prized picks, Khalil Rountree, suffer an unexpected upset loss when he was submitted by Cory Hendricks, who was specifically chosen for the bout because he had a foot injury and wouldn't be able to compete at 100 percent. 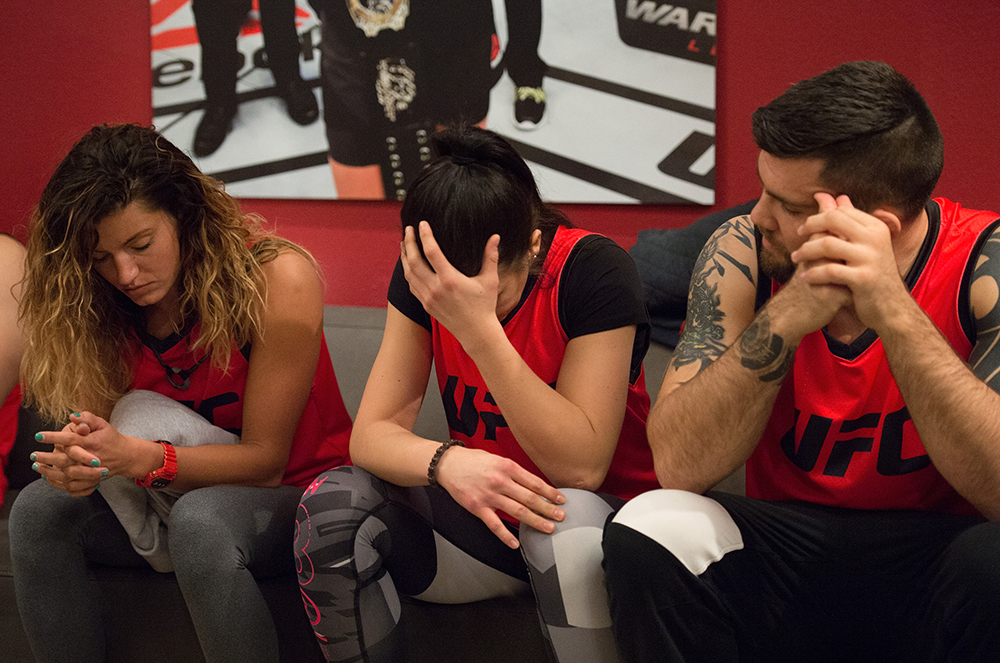 Then last week, Jedrzejczyk had to watch her No. 1 pick in the women's division, JJ Aldrich, get mauled by Gadelha's top selection, Tatiana Suarez, in a two-round battle that ended with a rear naked choke. There's no mistaking the dejection on Jedrzejczyk's face as she watched another of her top picks go down early in the competition, while Gadelha celebrated a second straight victory over the strawweight champion.

Those kinds of defeats can not only set a team back for the entire season, but it can serve as a real morale killer, and it has certainly left Jedrzejczyk agitated as she prepares for the latest episode with her team needing a serious wake up call.

There are few athletes in the UFC who train as long or hard as Jedrzejczyk, but she hasn't seen that kind of effort out of her team when they are preparing for fights. So with a third bout coming this week pitting heavy hitter Myron Dennis against Team Gadelha fighter Andrew Sanchez, she's turning up the heat in anticipation of a victory.

Anything less than maximum effort is going to be met with a lot of anger coming from Jedrzejczyk, and her team is in for a real surprise this week as they find out what it's like to end up on the strawweight champion's bad side.

"They are training like little girls in primary school," Jedrzejczyk said about her team this week.

She's going to get results or they are going to continue to feel her wrath as the season moves forward.

Elsewhere this week, Gadelha is continuing to celebrate her success by pushing her team the same way she's done since the beginning of the show. When the series started this year, Gadelha made a decision right away to separate her team into two halves, with the men working with two of her coaches and the women working with the other two. So far, that formula has worked to perfection, with Gadelha overseeing the entire room.

Now that she's up 2-0 in the competition, Gadelha is looking to knock off even more of Jedrzejczyk's top selections with another strategic matchup, as she picked a very strong grappler in Sanchez to take on a striker like Dennis.

Sanchez was a real surprise when he debuted on the show this year after walking into his elimination round bout against Phil Hawes, who was one of the most highly touted prospects going into The Ultimate Fighter this season. Hawes is training partner of interim UFC light heavyweight champion Jon Jones and works under coaches Greg Jackson and Mike Winkeljohn in New Mexico. Sanchez also happened to be one of the smaller fighters coming into the show this season, so expectations were low, especially facing someone like Hawes in the opening round.
RELATED CONTENT: Fighter blog: Eric Spicely - Ep. 4 | WATCH: Turnaround Time for Team Joanna

Still, Sanchez defied the odds and handled Dawes with relative ease to make it into the house and become Gadelha's top choice for the men's light heavyweight division. He'll certainly have his hands full with Dennis, who is a power puncher with a long history in kickboxing that could serve him well in this competition. Dennis also happens to be one of the bigger, stronger fighters on the show, and that could be a disaster for Sanchez if he can't drag this fight to the mat in the opening minutes of the first round.

Sanchez knows his best path to victory is putting Dennis on the ground and using his jiu-jitsu to stifle the big man on the mat. It's not easy for a striker to hit hard while on their back, just trying to survive, and that's exactly where Sanchez will want Dennis in this fight.

On the flipside, Dennis showed great takedown defense after an early misstep in his opening round fight to the get into the house. Dennis had to fight off some early takedowns in his elimination round bout, but once he took control there was no looking back. Dennis began to shrug off his opponent's takedown attempts and then opened up a barrage of strikes on the feet. From there, Dennis took over and finished the fight with a punishing series of punches.

Dennis has to know that's the same strategy to use against Sanchez, and with his size and power advantage, he only needs one good shot to land and he could finally put Team Joanna on the board.

This week will also feature another showdown between Jedrzejczyk and Gadelha, as the two coaches battle over gym time. It's a recurring theme as these two women go after each other all season long, and this latest altercation is just another example of the disdain they share for one another. Gadelha seems to get under Jedrzejczyk's skin like nobody ever has before, and as UFC President Dana White says this week, "If she keeps doing it, Joanna's going to explode."

In other words, don't miss this episode.

The latest installment of The Ultimate Fighter: Team Joanna vs. Team Claudia debuts tonight on FS1 at 10pm ET.