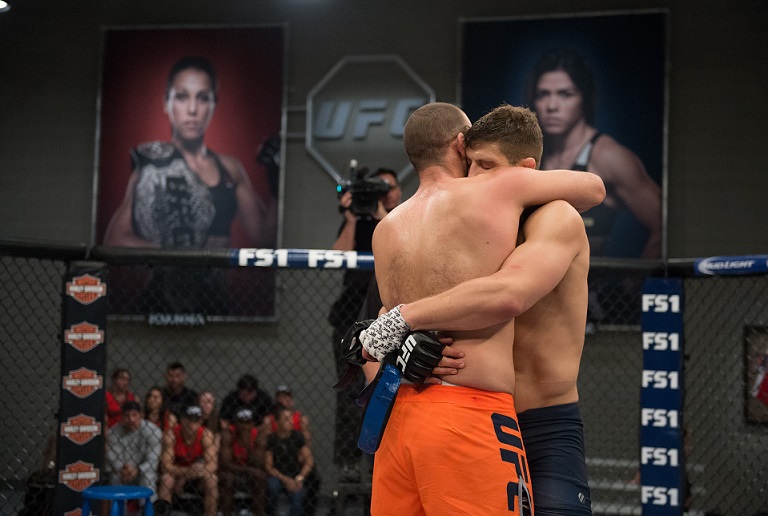 Following a dominant win by Andrew Sanchez last week that punched his ticket to The Ultimate Fighter finale, the next bout in the semifinals will take place in the women's strawweight division as Amanda Cooper takes on Lanchana Green.

It's not an easy position for the two fighters to be in, considering they trained together all season long as members of Team Claudia, but after all four women from the same team pushed through to the semifinals, there was no other choice but to face each other in the next round.

Cooper was one of the early favorites to do well in the competition thanks to a solid background and professional record coupled with a well-rounded skill set that included a lifetime of boxing training as well as a very slick ground game. On the flipside, Green was a relative unknown when the show started after she joined the cast from a small town in England and a gym that no one had ever really heard of before she made it through the opening round of the tournament.

Green was certainly impressive in that fight, however, as she dispatched veteran competitor Ashley Cummins after taking a brutal beating in the first round before dishing out a punishing finish in the second. Green then battled through another tough fight in the quarterfinals over Helen Harper to make it to this point in the competition.

Ahead of the fight this week, both women competing in the semifinals will benefit from some extra help courtesy of bantamweight champion Miesha Tate, who will stop by to assist Team Claudia and lead a training session. Tate is very familiar with The Ultimate Fighter after coaching opposite Ronda Rousey just a few seasons ago and she helped lead both Julianna Pena and Chris Holdsworth to victories as part of her team during the season.


Tate is not only the best women's fighter in the world right now at 135 pounds, but she's been a coach for most of her career as well. She's been a huge part of her boyfriend Bryan Caraway's career as he's risen to top five status in the men's bantamweight division and Tate was front and center during his recent win over previously undefeated prospect Aljamain Sterling.

Tate's input will certainly be a huge help for both Cooper and Green ahead of their fight, as well as an educational outlet for all the fighters on Team Claudia as they look to grab the brass ring over the next few weeks on the reality show.

Tate's appearance will be a welcome distraction for Team Claudia, as Cooper and Green then have to separate to get prepared for the battle ahead. Head coach Claudia Gadelha has already said that she won't be cornering either fighter in the matchup, so it's up to Cooper and Green to divvy up the trainers and fellow teammates to help them prepare over the final few days before meeting.

For Cooper, the battle this week will not only be against Green but she will also have to fight her own body as she attempts to cut to 115 pounds for only the third time in her career. See, before The Ultimate Fighter started, Cooper was a natural flyweight competing at 125 pounds, but for the opportunity to get into the UFC, she made the sacrifice to get down to strawweight instead.
RELATED CONTENT: Recap last week | All-new tonight on FS1 at 10pm/7pm ETPT!

Through her first two performances, Cooper showed strength and resiliency as she made the cut down to 115 pounds without too much struggle. A third weight cut over the course of six weeks will truly test Cooper's ability and mental toughness because it's not an easy road to walk during such a short period of time.

There have been a number of fighters who have dropped out of the Ultimate Fighter over the years dealing with the same weight cutting woes as Cooper will face this week. Gabe Ruediger famously struggled during season five when he was part of BJ Penn's team, and his struggle was so severe that his teammate nearly had to lock him into a sauna to sweat out the last few pounds. Ruediger ultimately fell short and he ended up getting booted from the competition.

During season 18, Cody Bollinger faced a similar circumstance as Cooper deals with this year after he never previously competed at bantamweight before joining the show. Bollinger was a natural featherweight, but he made the cut down to 135 pounds for the sake of the show and he was very impressive in his debut fight to get into the house.

Unfortunately, Bollinger's second cut to 135 pounds backfired and he ended up dropping out of the competition when he could no longer make it to the required weight. So now Cooper will have to face her own demons when it comes to weight cutting this week and it's not going to be easy for the former 125-pound competitor to get down to 115 pounds for the third time in six weeks.

Outside of the weight cut, Cooper's main focus remains on beating Green and making it to the finale. 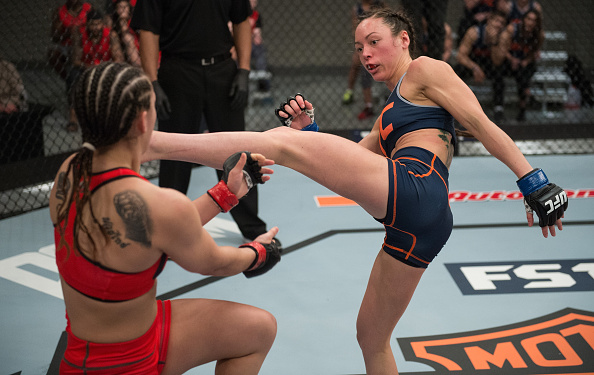 On paper, Cooper is certainly the more well rounded competitor, with a solid boxing background and vastly more experience on the ground. Green has shown incredible toughness and durability while also displaying arguably the best Muay Thai kickboxing for anyone in the strawweight competition. Green has to know that to beat Cooper she needs to keep this fight on the feet and she has to be able to apply the pressure over the course of both rounds.

Green is a punishing striker who dishes out damage with a barrage of strikes rather than landing one big punch or kick. She has to stay comfortable in the pocket with Cooper, but she can't show fear in the exchanges or Green will get planted on her back and get stuck there from the opening bell until the final horn.

Cooper certainly has more ways to win, with knockout power on the feet and a dominating ground game, but if her weight cut backfires and she's zapped of energy after the first few minutes, Green could feast on her downfall.

Who will walk out victorious in this battle of Team Claudia versus Team Claudia? Will Cooper be able to overcome a tough weight cut to win or will Green continue to surprise everybody in the competition with another huge win?

Tune into the penultimate episode of The Ultimate Fighter tonight at 10pm ET on FS1 to find out.