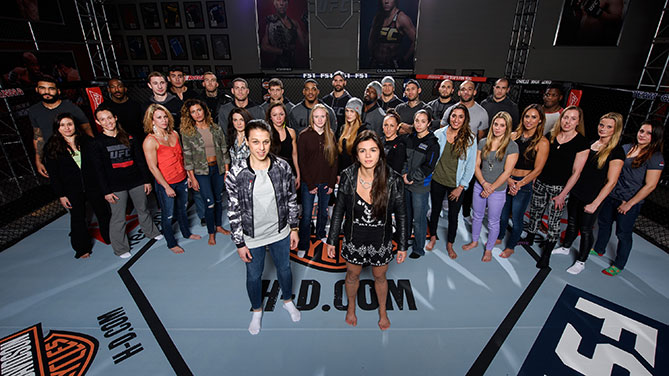 The new season of The Ultimate Fighter is officially underway after the debut episode featured 16 elimination round fights, as well as the introduction of new coaches Joanna Jedrzejczyk and Claudia Gadelha.

There's a ton of talent on the show this season, and they will be led by two of the fiercest rivals in the sport. Jedrzejczyk is the reigning and defending strawweight champion, but Gadelha has been her toughest challenge thus far in the UFC. Now the two women will coach the show for six weeks while trying not to punch each other ahead of their fight in July with the strawweight title on the line.

"These two women do not like each other," UFC President Dana White said as he introduced the two newest coaches, who will become the first ever strawweight fighters to lead a season of the show.

As much as Jedrzejcyzk and Gadelha were champing at the bit to go after each other from the first time they were in the gym together, the first episode this season was all about the light heavyweight men and strawweight women, who were all clamoring for a spot in the house during the elimination round fights.

These opening 16 fights did not disappoint, and it looks like the new season of The Ultimate Fighter will feature plenty of talented athletes who will eventually vie for a UFC contract by the end of the competition. 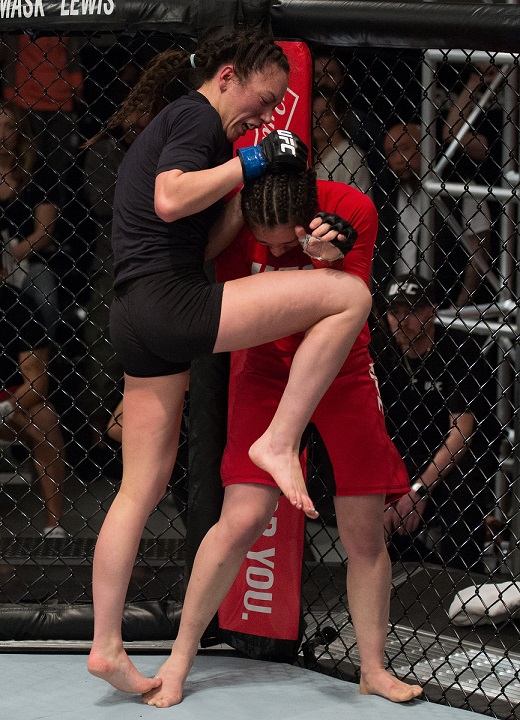 Right out of the gate, both divisions were well represented, with Amanda Cooper debuting in the opening fight of the show and making short work of Mellony Geugjes with an armbar finish on the ground. Eric Spicely also got things going for the light heavyweights with a dominant win over Kenneth Bergh, who he put away with a rapid-fire rear naked choke early in the first round.

St. Louis police officer Ashley Cummins was next up on the docket, as she took on British fighter Lanchana Green. Green got her start in the sport after she was attacked by a group of girls in her native England, and afterwards decided to take up training for mixed martial arts as a self-defense mechanism. Now years later, Green is on the show after a back and forth battle with Cummins over two rounds.

Green showed a ton of toughness after giving up a takedown early in round one and nearly being submitted by Cummins before time ran out on the clock. The second round was the exact opposite after Green stopped a takedown attempt from Cummins and ended up unloading an unbelievable barrage of knees absolutely brutalizing her opponent. Green eventually got the stoppage victory, which earned her a spot on the show this season.

Khalil Rountree will certainly be a favorite going into the competition this year after his debut performance against Muhammad Dereese in the opening round. Rountree had to stave off several takedown attempts during the first round before coming back with a highlight reel finish in round two. Rountree blasted Dereese with a vicious head kick on the feet before putting a stop to the contest with a pair of body kicks on the ground that sounded like a cannon exploding in The Ultimate Fighter gym.

"It was one of the most vicious finishes, right up there with Uriah Hall's spinning head kick," White said about Rountree's performance.

Rountree was actually one of three fighters represented by Las Vegas gym Syndicate MMA during the opening round, and he was ultimately joined by both of his stablemates on the show. Jamie Moyle joined the strawweights with a win by rear naked choke over Alyssa Krahn, while Cory Hendricks battled through three rounds to make it for the light heavyweights with a win over Marcel Fortuna.

The opening round fights didn't end without a bit of controversy, regarding the strawweight bout between Jodie Esquibel and Ashley Yoder. The two women engaged in a battle over two rounds, with each of them gaining the upper hand at different points, but it appeared that Esquibel got the better of the exchanges over the first 10 minutes. Esquibel's teammate and fiancée Keith Jardine was confident that she did enough to get the win, but the judges didn't see things that way.

Yoder was handed the victory after two rounds and even White was stunned at the result as he watched Esquibel go home from the competition despite putting on a performance that should have earned her the win. 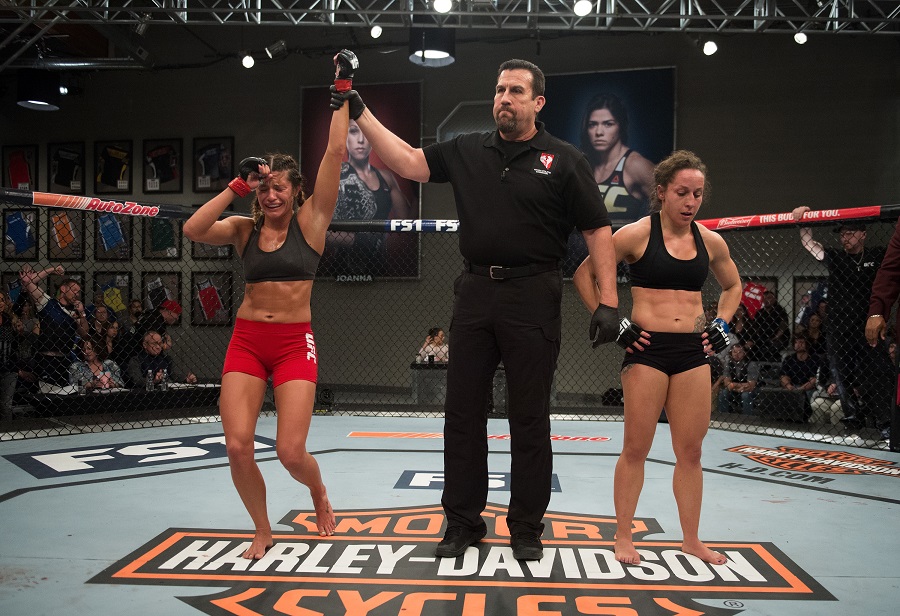 While that fight left a bad taste in everyone's mouth, there were plenty of great performances throughout the opening episode to outweigh that lone bad moment.

Josh Stansbury made a triumphant return to The Ultimate Fighter after a knee injury stopped his previous attempt to make the show back on season 19. This time around, Stansbury's leg held up and made short work of Trevor Carlson with a key lock in the opening stanza.

Myron Dennis also made quite the impression during his opening round fight, not only because he knocked out Jamelle Jones, but because it's clear he's going to be one of the characters to watch this season.

Dennis nicknames himself "Blackie Chan" and he's definitely got the gift of gab.

"I'm all gas, no brakes. Like O.J. in that Bronco. What's that mean? That means I'm not stopping," Dennis said ahead of his debut.

Highly touted prospect Phil Hawes was also the talk of the competition as he made his debut during the opening episode, but things didn't play out for him in the end. Hawes comes from the Jackson-Winkeljohn camp in New Mexico, where he's one of Jon Jones' main sparring partners, but four-time NAIA All American wrestler Andrew Sanchez grounded him for two rounds and brought an end to his hype before it could really even begin.

WATCH ALL THE ELIMINATION FIGHTS HERE

Here are the full results for the opening 16 fights in the competition:

Once the fights were wrapped up, the teams were selected as follows:

From there, it was time to select the first fight of the season, and the strawweight champion got the choice. Jedrzejczyk quickly threw down the gauntlet with her selection, as she picked Khalil Rountree to take on Cory Hendricks. Not only was Rountree one of the most impressive fighters getting into the house, but Hendricks was dealing with a foot injury after his opening fight. To add a little extra drama to the proceedings, Rountree and Hendricks just happen to be teammates, so this opening round fight will certainly be high on emotion as both men try to punch their ticket into the quarterfinals.

The Ultimate Fighter: Team Joanna vs. Team Claudia returns next Wednesday night at 10pm ET on FS1, as it's teammate versus teammate in the first fight of the season.