The new season of The Ultimate Fighter is officially underway after 16 fights took place on the debut episode Wednesday night. When the dust settled, eight Americans and eight Europeans became the latest cast of the show under the guidance of coaches Conor McGregor and Urijah Faber.

Unlike most seasons of the series, there were no teams being picked this year. Instead, 16 fighters from America and 16 from Europe faced off with each other, with the winners making up the squads for each respective side.

Faber will coach the show for the second time after going up against longtime rival Dominick Cruz on his first stint back in season 15. That time, Faber filmed the only live season in the history of The Ultimate Fighter, where he spent 12 weeks with Cruz. In other words, six weeks of filming with McGregor will be a piece of cake. 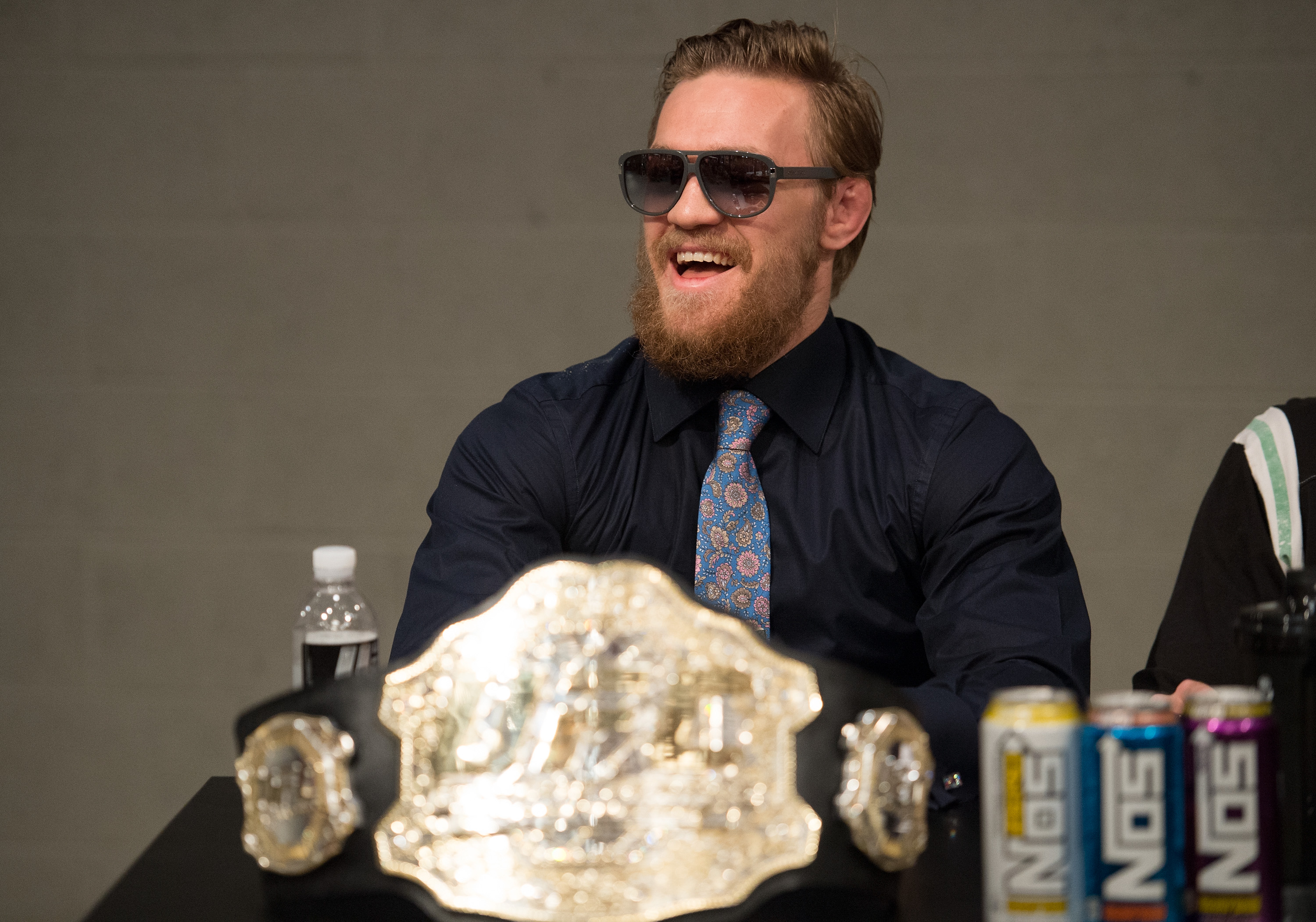 As for the interim featherweight champion, he will coach the show for the first time ever while he begins preparing for his UFC 194 matchup with Jose Aldo in December. McGregor has been a mainstay at his home team, SBG in Ireland, for years, so he certainly has a great foundation around him to give leadership to the group of Europeans he inherits this season.

With 16 fights to get to on this episode, the action kicked off pretty early, although both the Americans and the Europeans made bold predictions about how this season would go once the two teams were decided and the competition began.

"We've always been better…and now we're going to prove it," Martin Svensson from the European side said before the bouts began.

The first fight of the season kicked off with Brazilian jiu-jitsu black belt Ryan Hall taking on Johnny Nunez in a battle of Americans. Hall was one of the most highly-touted prospects coming on to the show and his performance proved that he definitely belonged amongst the top eight Americans.

Hall wasted no time dropping to his back and grabbing onto Nunez's leg before transitioning to an inside heel hook, which is a particularly nasty submission that torques an opponent's leg, twisting and turning the knee in directions it wasn't meant to go. Nunez quickly tapped out, as Hall sent a message to the Europeans that anyone brave enough to go to the ground with him is going to be in trouble in a hurry. 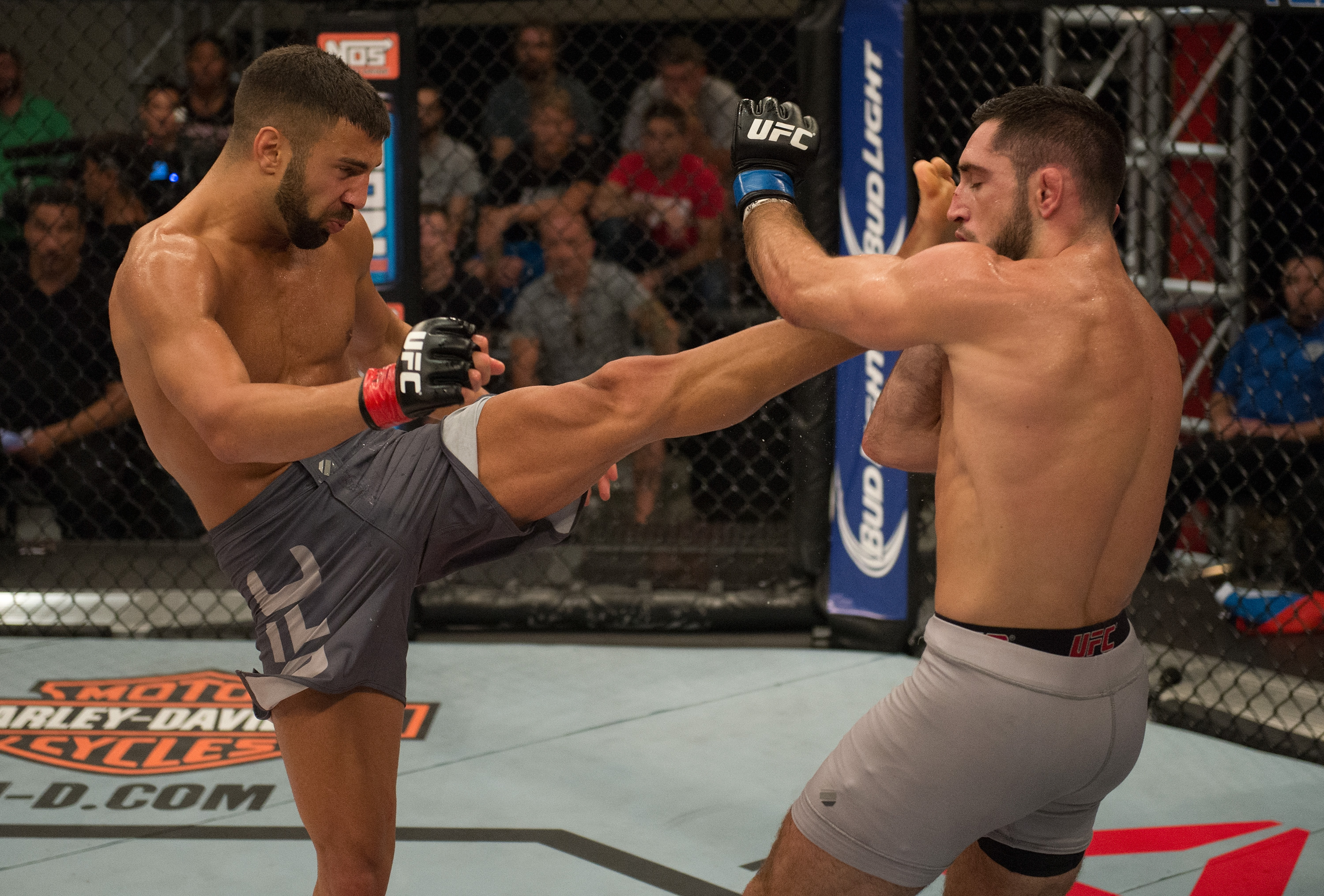 The Europeans got to shine in the next fight as former K-1 kickboxer David Teymur outpointed Thiabault Gouti in possibly the best bout of the entire two-hour episode. Teymur and Gouti blasted each other back and forth with strikes over two rounds while trying to gain the upper hand in the stand-up. Ultimately, Teymur was able to execute a more technical and precise striking game to get the win.

Thanh Le made an impressive debut, as he knocked out Andreas Quintana with a huge straight right hand that crushed the former boxer. Le was battling with Quintana early, but all it took was one punch to change his course of history forever.

Next up was McGregor's longtime teammate and close friend Artem Lobov, who was one of the most experienced fighters coming onto the show. He faced a very tough challenge from Medhi Baghdad, who trains alongside former UFC middleweight champion Anderson Silva on a daily basis. 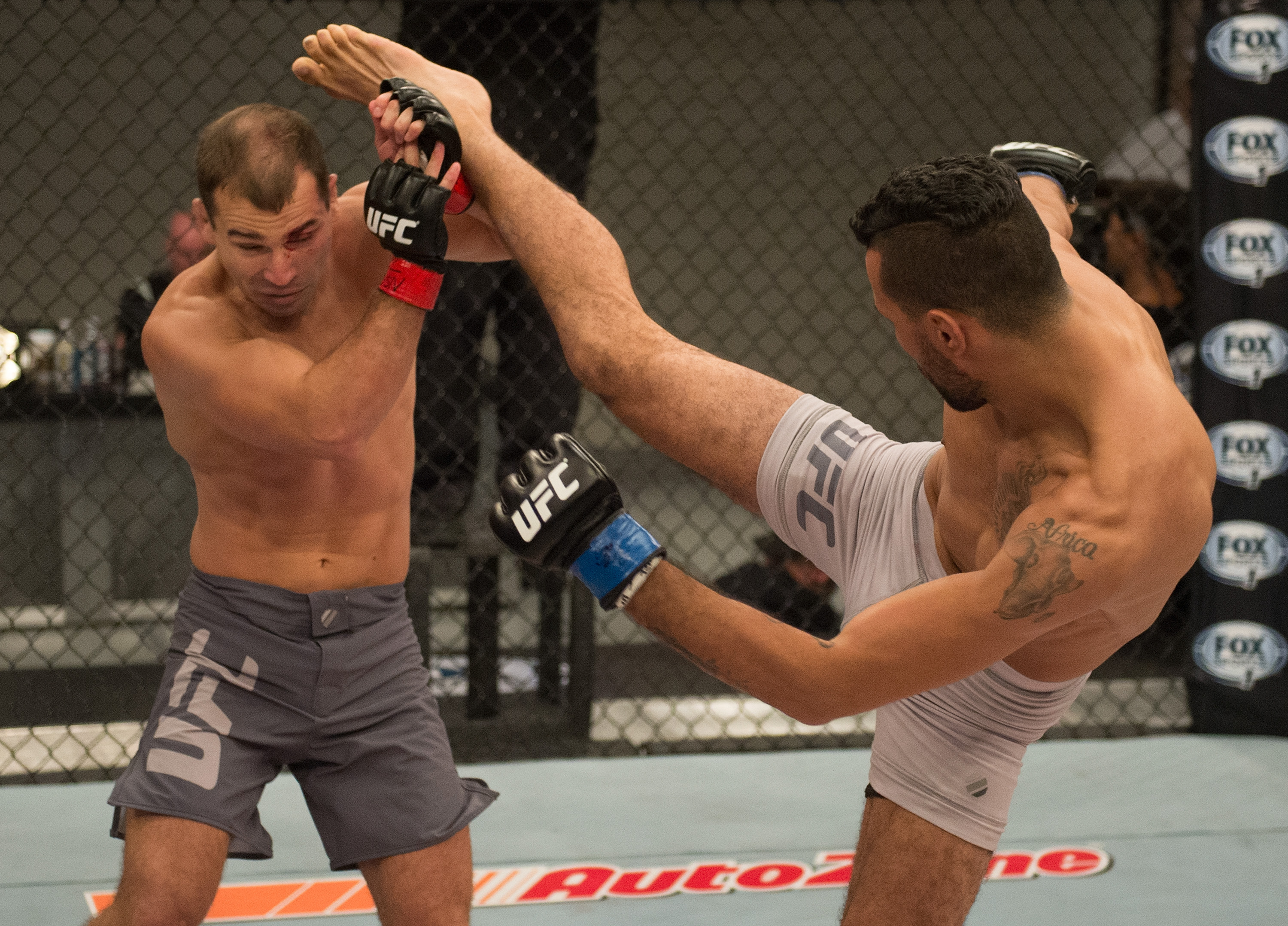 Throughout the fight, McGregor was off his chair shouting instructions to his teammate as Lobov and Baghdad battled it out. It was a war of attrition, but when it was over, Baghdad stood victorious as Lobov felt dejected dealing with a loss. The truth of the matter is that both fighters deserved a space in the show, but unfortunately they were matched up together in the elimination round and only one of them could make it into the house.

The next two fights both ended in decisions, as Julian Erosa took out Jason Soares for the Americans while British standout Saul Rogers beat Paulo Boer.

Billy Quarantillo made quite a splash with his TKO win over Brandon Ricetti, although the only thing the coaches could talk about during his fight was the fact that he says people tell him constantly that he looks like a mix of Channing Tatum and Mark Wahlberg. While McGregor and Faber didn't agree on much during the first day, this was one thing they both had to laugh at a little bit.

Frantz Slioa made a very impressive showing for the European side with a rear naked choke submission over Martin Delaney. Jason Gonzalez made his way into the house with a fantastic come from behind win over Tim Welch that included a liver shot that absolutely shut his opponent down during the second round. Gonzalez was definitely losing up to that point, but the shot to the body crippled Welch and brought an end to the fight. 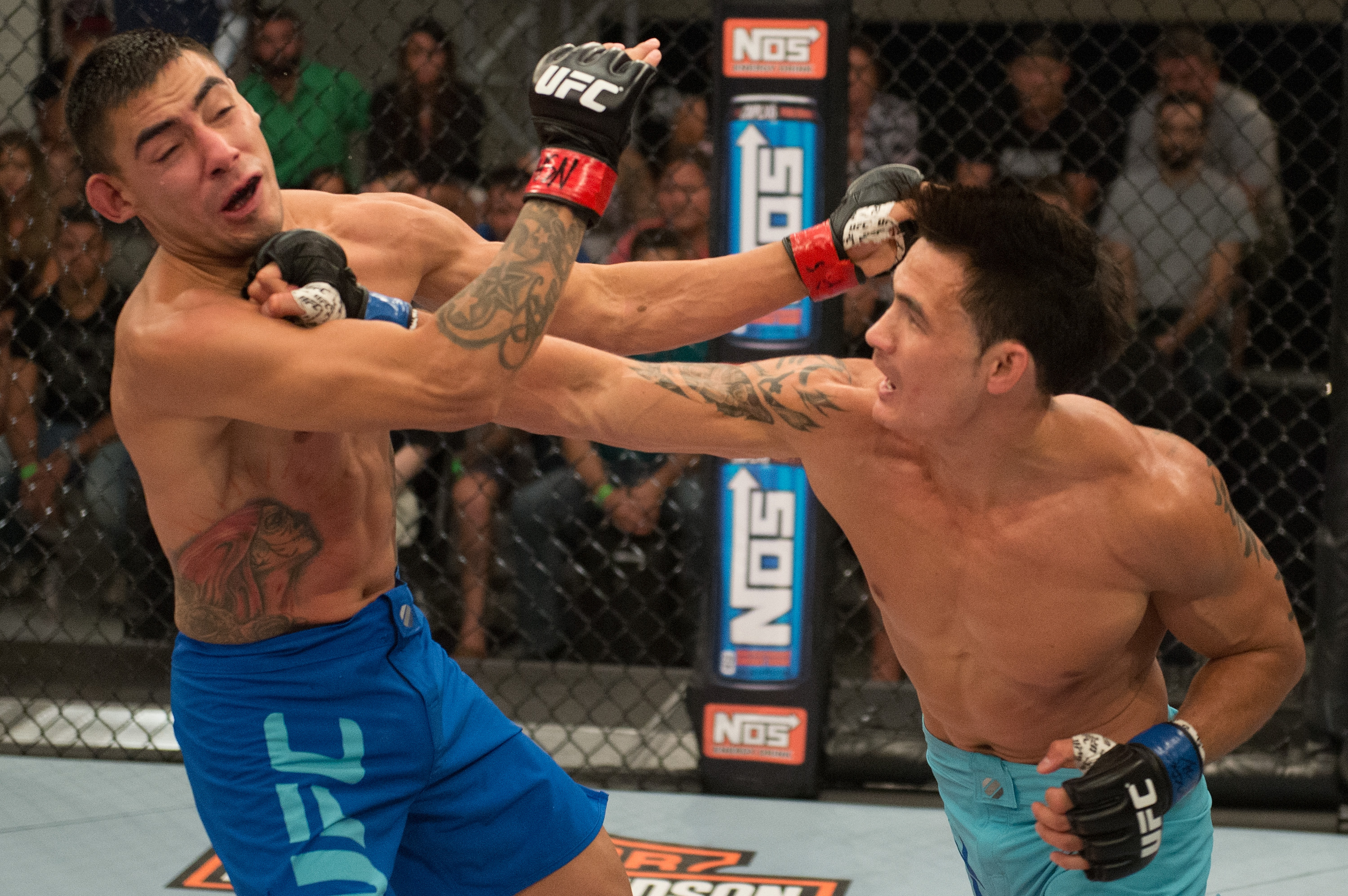 Abner Lloveras took out Vlado Sikic by guillotine choke, but not without a ton of heart being shown by his opponent. Sikic had his shoulder pop out of its socket at least two times during the fight and yet he kept insisting on continuing despite only really having one arm to use. That's the kind of spirit that will probably earn Sikic another shot in the UFC when the show is over.

Tom Gallicchio had an impressive showing in his first bout as he took out Mike Flach early in the first round after taking the fight to the ground and then choking out his opponent to earn a spot on Team Faber.

Martin Svensson stood up for his earlier prediction as he beat Mohamed Grabinski over three hard-fought rounds while “The Polish Zombie,” Marcin Wrzosek, took out Djamil Chan by rear naked choke to earn his spot in the house.

Sascha Sharma got past Sean Carter for the final spot on the European side while James Jenkins got the job done against Brennan Sevin to make the American team. Maybe the most vicious performance of the entire episode came courtesy of Chris Gruetzemacher, as he took out Austin Springer in a brutal affair. 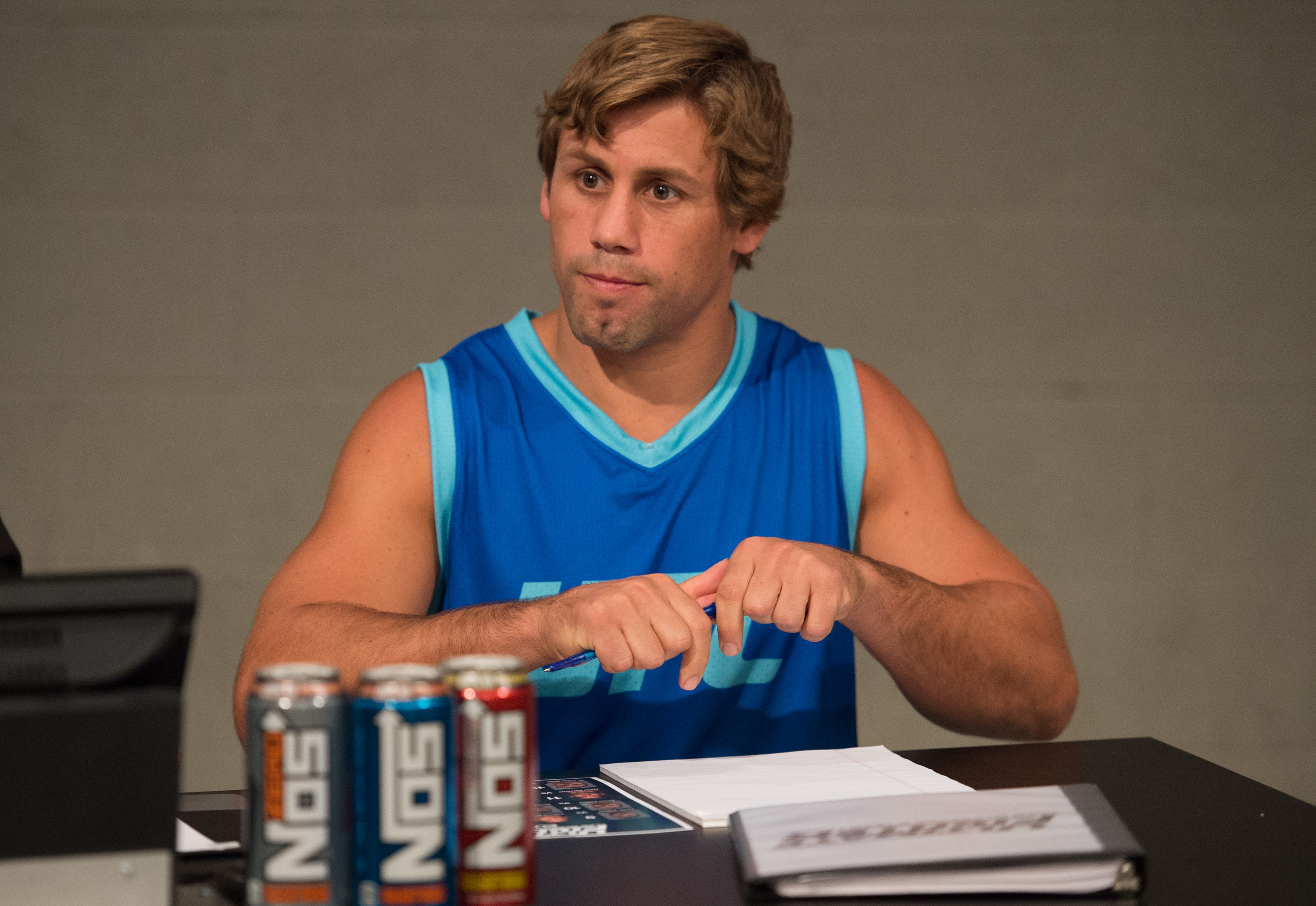 The two fighters battled it out for a little while, but once Gruetzemacher started to find a home for his clinch work while combining a few knee strikes, he took over the fight. There were several times UFC President Dana White thought the bout should have been stopped earlier than it was, but, in the end, Gruetzemacher got a well deserved win.

As the final fights finished, McGregor and Faber looked over their teams as they began to plot how this season would unfold. White then kicked off the tournament by flipping the coin and giving Faber the first fight pick of the season.

The journey to the December 11 finale begins now as Team McGregor squares off with Team Faber on the new season of The Ultimate Fighter.