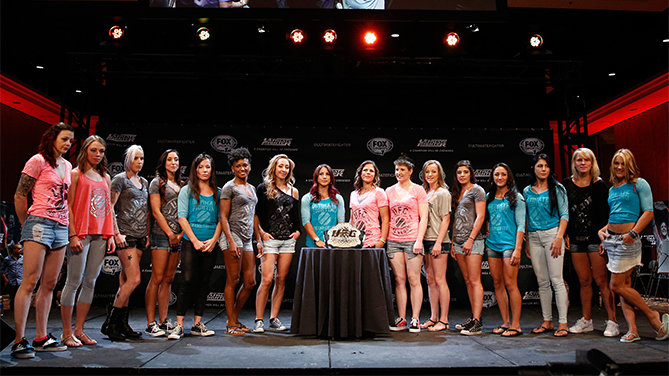 The tone was set on The Ultimate Fighter this season when the first fight ended in an upset as No. 14 ranked Randa Markos took out No. 3 seed Tecia Torres right out of the gate.  That one moment alone let everybody know that just because the fighters are ranked, it doesn't mean the lower seeds aren't capable of moving on in the tournament.

No. 16 seed Angela Hill has a big hill to climb this week as she takes on No. 1 ranked Carla Esparza, who not only has a huge experience advantage but she's also the former Invicta FC women's strawweight champion.

Hill just recently transitioned to MMA after a successful career as a Muay Thai kickboxer, but with only one fight to her name, can she overcome the insurmountable odds and actually take out the best fighter in the world at 115 pounds?

With Team Melendez down 0-3 in the competition, you can bet Gilbert Melendez and his coaching staff are going to do everything necessary to change the momentum in this competition by not only getting a win but pulling off the biggest possible upset of the entire season in the process.

Each season The Ultimate Fighter affords coaches the opportunity to bring in teammates, specialists and other coaches to help get the best out of the competitors on the show.  Sometimes one of the head coaches even needs to step away and the team gets a guest instructor for the week, so with Anthony Pettis out for a few days, former WEC champion Urijah Faber steps in to lead Pettis’ team for this episode.

Faber's credentials as a fighter and coach are legendary at this point.  He's a former champion at 145 pounds and was considered one of the best pound-for-pound fighters in the sport for several years.  Throughout his storied run in the UFC and WEC, Faber has been a wrecking machine, tearing through every contender he's faced.

As it turns out, Faber has never actually lost in a non-title bout, so he's certainly a force to be reckoned with.  Beyond his own fighting career, Faber is also a fearsome coach, having assembled Team Alpha Male out of his gym in Sacramento.

Faber saw the chance to build a team several years ago and now Team Alpha Male is looked at as the gold standard for fighters in the lighter weight divisions from featherweight down to flyweight.  Now he'll bring that expertise to Team Pettis to hopefully give the women there some pointers and tips to help them get to the next round of the competition.
Given his wrestling and grappling background, he'll probably serve as a great coach as Esparza gets ready for her match against Hill.

The animosity between teammates happens almost every year on The Ultimate Fighter and this year the conflict appears to be between Team Melendez fighters Angela Magana and Heather Jo Clark.

When the season started it seemed as if Clark's biggest rival would be her old pal Felice Herrig, but apparently the Las Vegas based fighter is rubbing her own teammates the wrong way as well.  It started earlier in the season when Clark tried to lay down a few ground rules for her teammates about chatting with the other women in the house about training and upcoming fights.

Clark was met with resistance right away in her attempts to lead and it seems as if Team Melendez is revolting against her again this week.

From the clip in the preview it's clear she's landed on Magana's bad side to the point where the sound of Clark's voice is akin to nails on a chalkboard.  Maybe the rankings could be changed and these two will fight instead?

The verbal showdown this week is definitely intense

The upcoming episode of The Ultimate Fighter also showcases the special friendship shared between two of the competitors on Team Pettis -- Carla Esparza and Felice Herrig.  While there are almost always instances where two teammates or training partners end up on the show together, it's rare that two best friends are actually on the show and the same team during the season.

For the past few years, Esparza and Herrig have become as close as family, often traveling together and training when the time allows.  Considering Esparza resides in California and Herrig in Illinois, they are constantly in contact - if you don't believe it, just check out their Twitter timelines at some point.

Maybe the craziest part about how these two became friends is they actually fought back in 2011 in a regional promotion in Florida.  Esparza got the best of Herrig in a three-round decision, but when the fight was over they became fast friends.

The fight this week will showcase a classic striker vs. grappler matchup as Carla Esparza takes on Angela Hill.

Esparza is not only the No. 1 ranked fighter and former champion, but she's also a two-time All-American wrestler from Menlo College.  Esparza will never keep it a secret that she's a beast on the ground and while she's not afraid to stand and fight with an opponent, the mat is definitely her home.  Esparza employs a powerful and unrelenting takedown game, coupled with a nasty submission arsenal as well.

Hill brings in a dynamic striking game with a powerful array of kicks and real knockout power at 115 pounds.  She's a newcomer to MMA, but undefeated as a Muay Thai specialist, with solid punches and kicks at her disposal.

It would be crazy to assume anything other than the obvious that Esparza will find a way to drag this one to the mat and beat Hill on the ground.  Esparza is as good as advertised and she definitely deserved the No. 1 ranking this season.

The big question mark, however, is Hill's takedown defense.  There's no real book on how good or bad she might be stopping a wrestling-heavy attack so if Hill is ready to counter Esparza's takedowns this fight could get interesting in a hurry.

To see who comes out on top, make sure to tune into the new episode of The Ultimate Fighter this Wednesday night on FOX Sports 1 at 10pm ET.