Read on to find out who won the light heavyweight bout between Chris Fields and Matt Van Buren.

The episode opens with Matt Van Buren chomping at the bit to get his hands on Chris Fields in the show’s final preliminary round fight. He tells us his teammates that he wants to “smash” Fields and rattles off a number of reasons why. He says that Fields talks too much and acts like he’s smarter than everybody else. Matt sums up his feelings basically as, “[Chis] is a turd.”

We then cut to the turd in question as Chris talks about his motivations for fighting. The grudge match against Matt may be one thing, but he competes for the opportunity to provide a nicer life for his wife. His commitment to the sport is something that his coach BJ Penn has recognized ever since Chris’s fight to get into the house. The Irishman’s determination and heart impressed the Prodigy, and he expects great things. Having said that, BJ realizes that it won’t be an easy task. Matt has the reach advantage, so Chris will have to change up his normal style. He’ll have to push Matt up against the fence and make it a brawl. Chris doesn’t see the situation as quit so dire and calls the fight his to lose.

Next, the remaining fighters head out to a local Harley Davidson retailer to design their own personal motorcycle which will be awarded to the winner of this season. TUF 15 champion Michael Chiesa is there to give a little guidance and talk about how much he enjoys cruising on his Harley. Matt Van Buren is harassing a worker about bike size, but the highlight of the experience has to be seeing BJ Penn walk out in a pair of leather chaps.

Van Buren then takes some time away from bothering retail workers to talk about his upbringing. 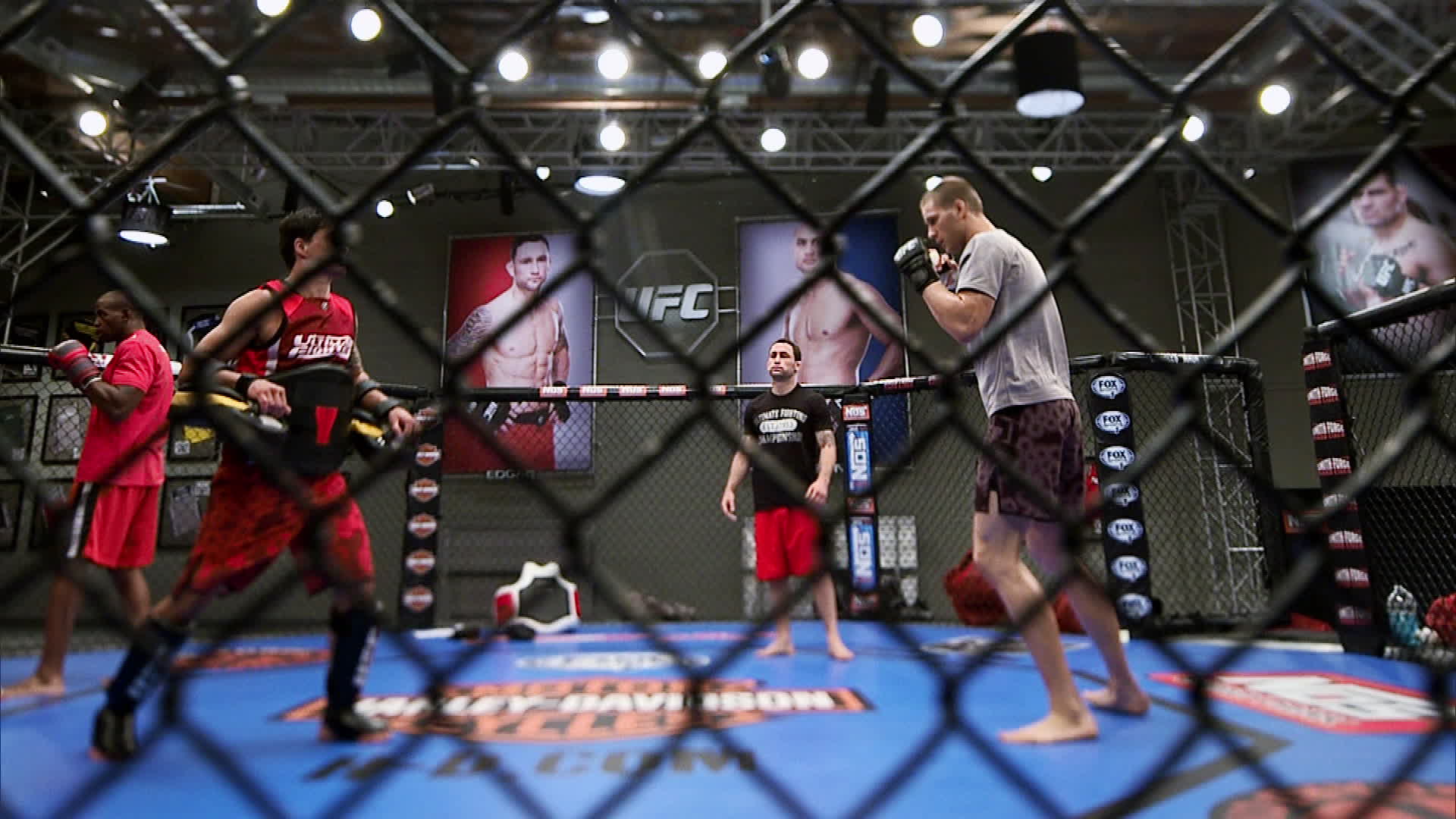 Growing up in southeast Virginia, he says that he was raised in a blue collar neighborhood with good, strong parents. Despite that, he had a lot of friends who started to get into drugs. In the last few years alone, he’s lost six friends to overdoses. Resisting the allure of drugs, confidence isn’t a problem for Matt. He considers himself a true mixed martial artist and believes he has the advantage in every facet. He credits this confidence to training at Alliance MMA in San Diego with UFC veterans such as Brandon Vera, Joey Beltran and Chris Leben. Weigh-ins go on without incident, there’s a little more trash talk and it’s fight time!

Chris front kicks, but Matt walks right through it. They two clinch against the fence and exchange knees. Chris fights for underhooks and finally reverses position. It’s short lived, though, as Matt takes it back. The Alliance MMA product throws a lot of knees, but none of them seem to land flush. They break and Matt takes the initiative with the hands. After a few strikes he moves in for a single leg that fails. He tries again for another takedown and the two fighters lock up the clinch. They stall, and the ref breaks them apart with just over a minute to go. About 30 seconds later, Van Buren finally converts on a takedown. There’s not enough time to advance position and the round ends.

Go Behind the Scenes of Fields vs. Van Buren!

Matt kicks and shoots right away for the takedown. Chris initially defends, but Matt’s persistence pays off. Chris is on the ground briefly and returns to his feet. Shortly after, Chris returns the favor with a takedown of his own. He moves for a d’arce choke, but Matt uses the opening to escape. They two exchange punches on the feet, and Chris lands the first significant strikes of the fight. A hook, cross combo connects and Matt looks dazed. Chris foolishly rushes in and gives Matt the opportunity to clinch him up and stall. Chris pulls guard hoping to land a miracle guillotine, but Matt pulls his head out and starts the ground and pound. Chris makes it back to his feet with less than a minute to go, but Matt plants him back on the ground. The round ends with Van Buren in control.

The judges score the fight 20-18, 19-19 and 20-18 for Matt Van Buren who takes home the majority decision. There’s not much time for celebration because Dana White is extremely unhappy. In the recap of the fight, he has a few choice words for the fighters. “Nothing [expletive] happened,” he states matter of factly. “Nothing interesting or exciting happened. I feel like his is the season of guys that don’t give a [expletive].”

Check Out Before-and-After Photos from Fields vs. Van Buren!

Normally this is the part of the season where Dana calls in the remaining semifinalists to ask them who they’d like to fight and why. Not this time around. He calls each guy in to give them a bit of a tongue lashing and decides that he’ll choose the fights himself. he calls all the guys together and the semifinals will be:

The episode closes with a preview into next week. Do the fighters take Dana’s criticism to heart? Can Eddie Gordon defeat the next Irish hope? How many drunk naked guys will there be? Find out this and more next week on The Ultimate Fighter!