Read on for the recap from the fifth episode of The Ultimate Fighter 19! 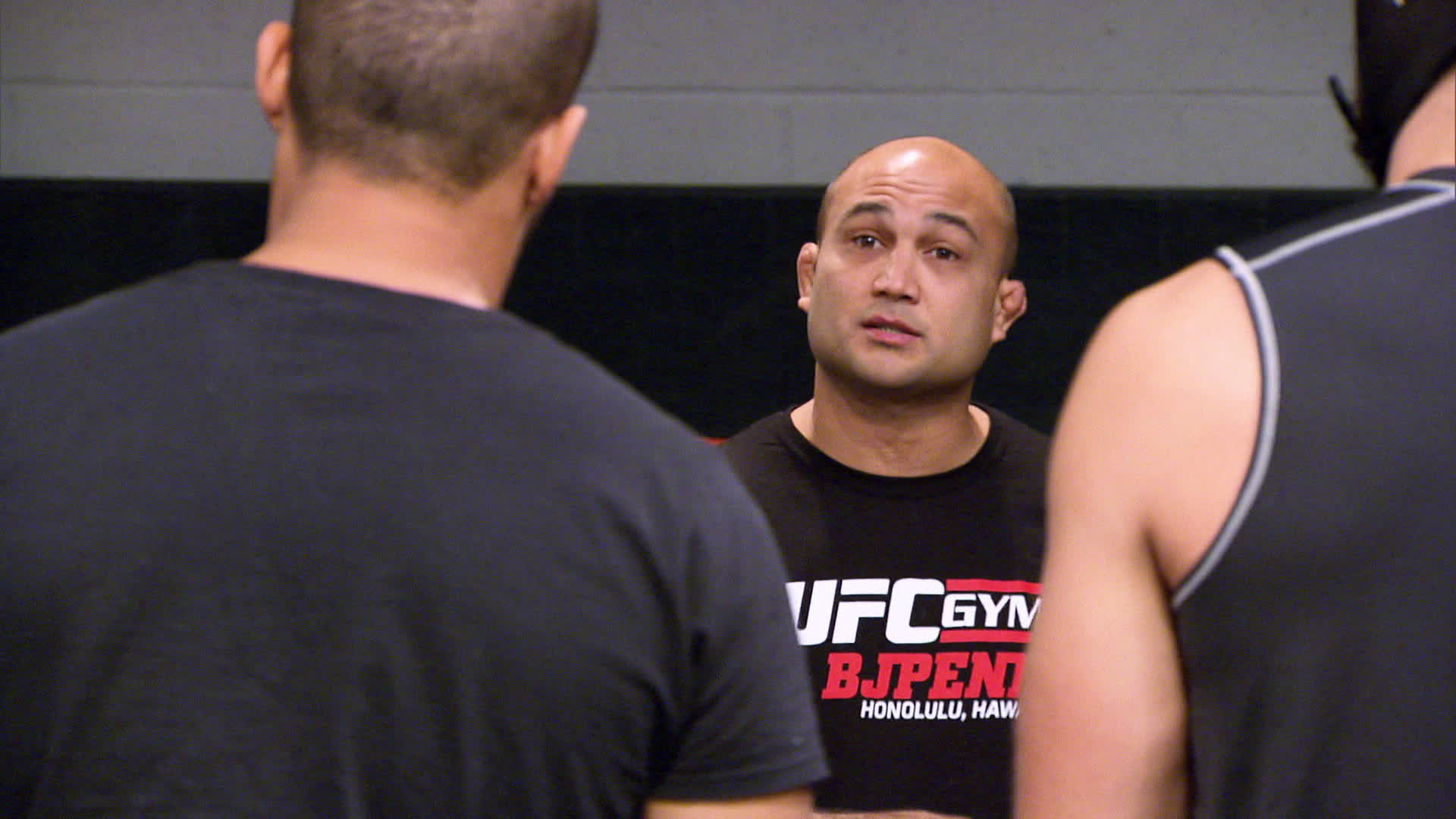 The show opens with Corey Anderson and Josh Clark discussing their upcoming fight with their respective teammates. A former professional boxer, Josh thinks his experience and striking make him a bad matchup for the Team Edgar wrestler. Corey may only have four MMA fights, but he’s not lacking confidence. He talks about how he “doesn’t know his own power,” and how he doesn’t just beat opponents -- he hurts them.

We cut to a Team Penn training session where the coaching staff is rethinking their regimen. Tim Williams’s loss last week has caused BJ Penn to reexamine how he’s been pushing the team during practice. Why did the person with the best cardio on the team tire out after only one round? The conclusion he’s come to is that the fighters haven’t been resting enough. He knows that some of the guys have been doing extra work at the house, and tells them to stop it. Daniel Spohn admits that it’s hard for the fighters to reduce their output, but the coaching staff has made a smart decision.

The team decides to take evening practice off, and it just so happens to be Halloween night. Instead of worrying about armbars and sparring, they worry about how to carve jack-o-lanterns. Mike King also worries about how to put on the right undergarments to match his female nurse outfit. The Team Edgar van pulls up, and Matt Van Buren wastes no time calling out Team Penn for their lack of work ethic. These complaints continue on to the next day when Frankie takes the team out to Mount Charleston for an afternoon hike. Frankie says it’s a good idea to get the guys out of the house, but Dhiego Lima wonders why they’re climbing a mountain on their off day.

We cut to another Team Penn session and learn more about their game plan for Josh. A classic 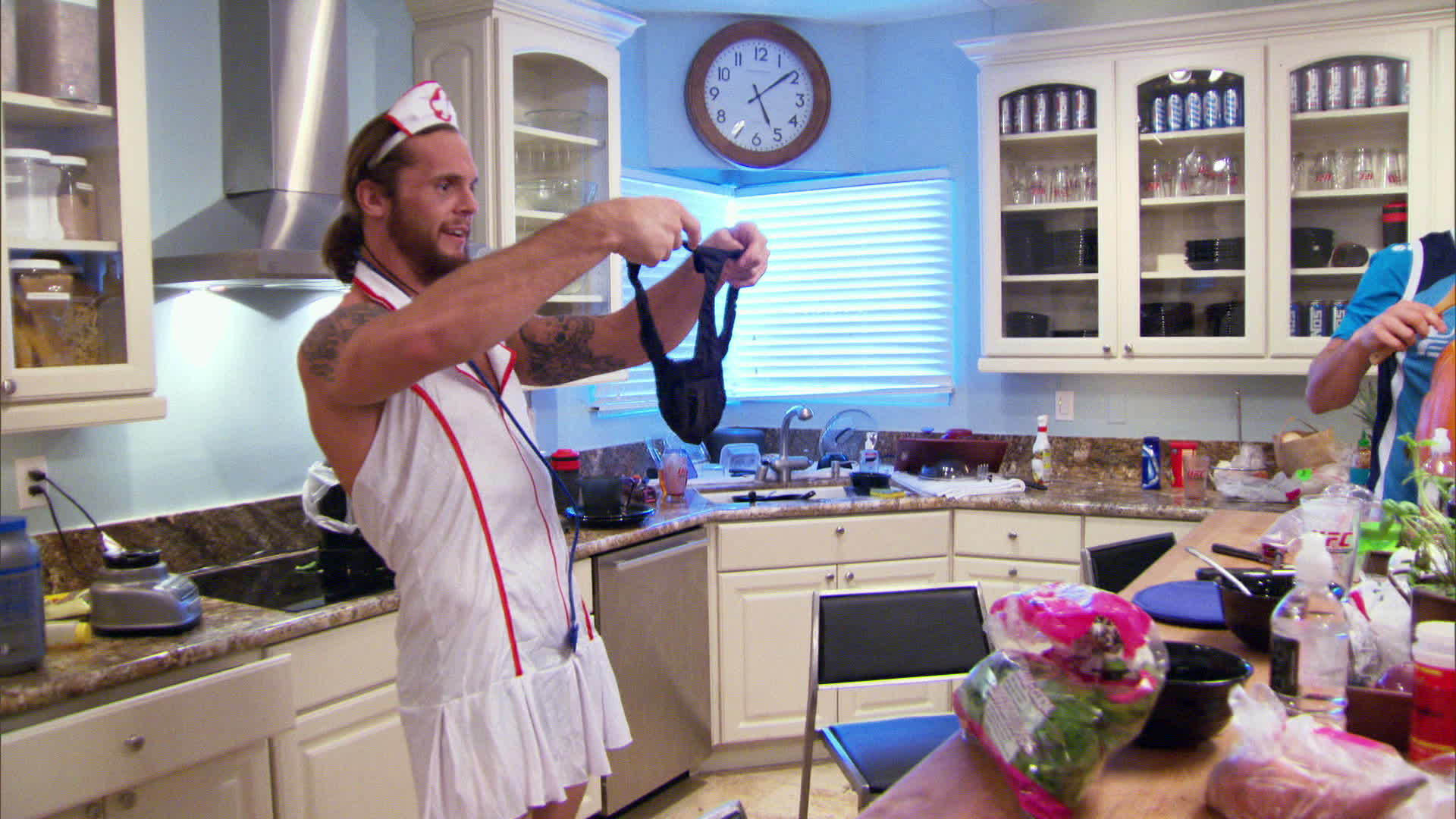 “striker vs. grappler” matchup, BJ knows that Josh has to watch out for the takedown. As long as Josh can avoid going to the ground, they expect him to KO Corey on the feet. Besides the takedown, the Team Penn staff worries about Josh’s ability to handle the pressure. Josh has confidence issues, and BJ sees how this affects him during training. “I see signs of brilliance, and then I see other things.” These “other things” are Josh getting submitted and pushed around during contact drills.

Back at the house, a bunch of the fighters are sitting around the kitchen table discussing the all the different MMA skill sets. Roger Zapata tries to explain to Corey that “wrestling is simple.” Eddie Gordon calls it, “The dumbest thing that I’ve heard in my time in the house,” while Corey takes it much more personally. He’s been wrestling since the age of 3 and dedicated so much of his life to the sport. To have someone call it simple feels like the ultimate insult.

A D-III standout that begrudgingly picked up MMA because of Ben Askren’s persistence, the 24 year old still has a lot to learn. He’s only been training in MMA for 7 months and Coach Edgar mentions about that Corey is still trying to figure out a lot about the sport. Frankie also calls him “a machine” and says the key to victory will be to push the pace. As long as he can put Josh on his back, it’ll be an easy fight. We’ll see how easy it’ll truly be, because it’s fight time!

Josh takes the center of the cage and starts letting his hands go. He’s flowing well, but nothing 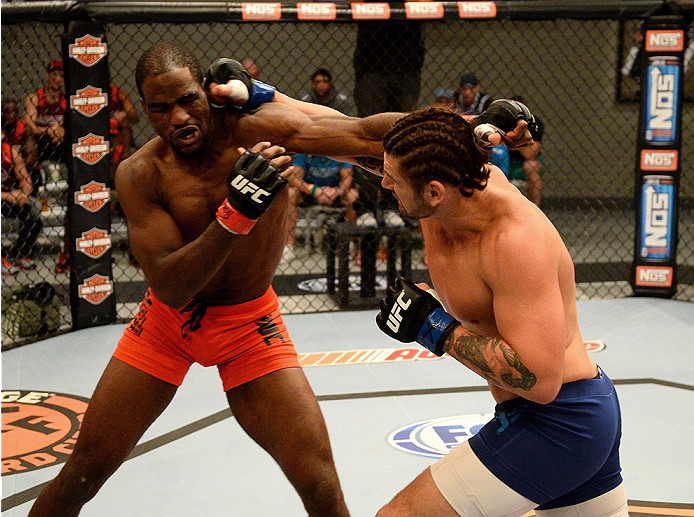 solid really connects. Corey has enough of this and attempts his first takedown only 30 seconds into the fight. Josh somersaults to create a scramble, but winds up against the fence. Corey easily puts Josh on the mat, but inexplicably lets him back to his feet. They’re striking again, and Josh connects on a hard uppercut. Corey tries to close the distance, but Josh hits him with another counter cross. Corey doesn’t appear dazed, but more punches are starting to find their way around his defense. Josh continues to throw haymakers and use his footwork to avoid Corey’s advances. Around 1:15 mark, Corey finally gets his hands on Josh and takes him down. This time he doesn’t let Josh back up and starts working from half guard. He scores some short punches and even pins one of Josh’s arms down. Josh gets his arm free and rolls through for a leg lock. He can’t finish the submission, but he uses it to get back to his feet. They trade jabs, and Josh tries to sneak a knee through. Corey grabs it, hits a single leg and finishes the round in dominant top position.

Corey starts the round with another single leg attempt, but Josh circles away and finds the mark with a low kick. Corey charges forward, grabs another knee attempt and scores another takedown. Josh has his guard and works for angles, but Corey stifles any chances for a submission. Corey can’t generate any offense either, and the ref soon stands them up. Josh 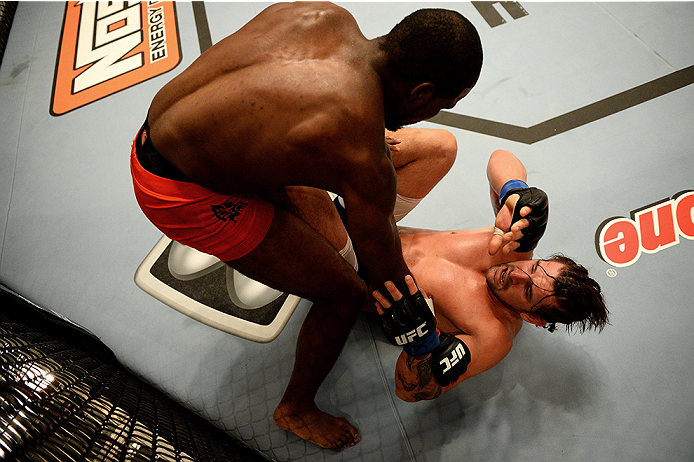 restarts with a flurry, but loses his balance after a kick attempt. Corey pounces on the opportunity and moves to top position. Josh fails at another leg lock, and can’t even use the attack to get back to his feet. With less than 30 seconds to go, Corey takes Josh’s back, starts punching and secures full mount. He brings the ground and pound and Josh shells up into full survival mode. The fight is on the verge of being stopped, but the Josh is saved by the bell.

Two judges give the fight to Corey and one has it tied 19-19. Corey Anderson wins by majority decision. BJ says that the first round was close, but, “Corey took over round two.” Frankie doesn’t think the fight was close at all, and calls the whole thing “one-sided.” Dana White blames Josh for running out of gas and, “having absolutely zero takedown defense.”

> Check out the rest of the Octagon photos here!

We move to the fight announcement and it will be Team Edgar’s Ian Stephens against the last pick and wrestling simplifier Roger Zapata. Frankie calls Ian a “strong wrestler,” and better athlete than Roger. He predicts an easy takedown and ground and pound victory. BJ knows that everyone expects Roger to lose easily, but they shouldn’t count him out just yet. Next week’s sneak peek shows that The Prodigy may not be too far off.

Can Matt Hughes fix Roger’s wrestling in time? Does Ian Stephens live up to expectations? Why is their fight so controversial? Find out this and more next week on The Ultimate Fighter!