Read on to find out who won the TUF 19 middleweight fight between Dhiego Lima and Tim Williams. 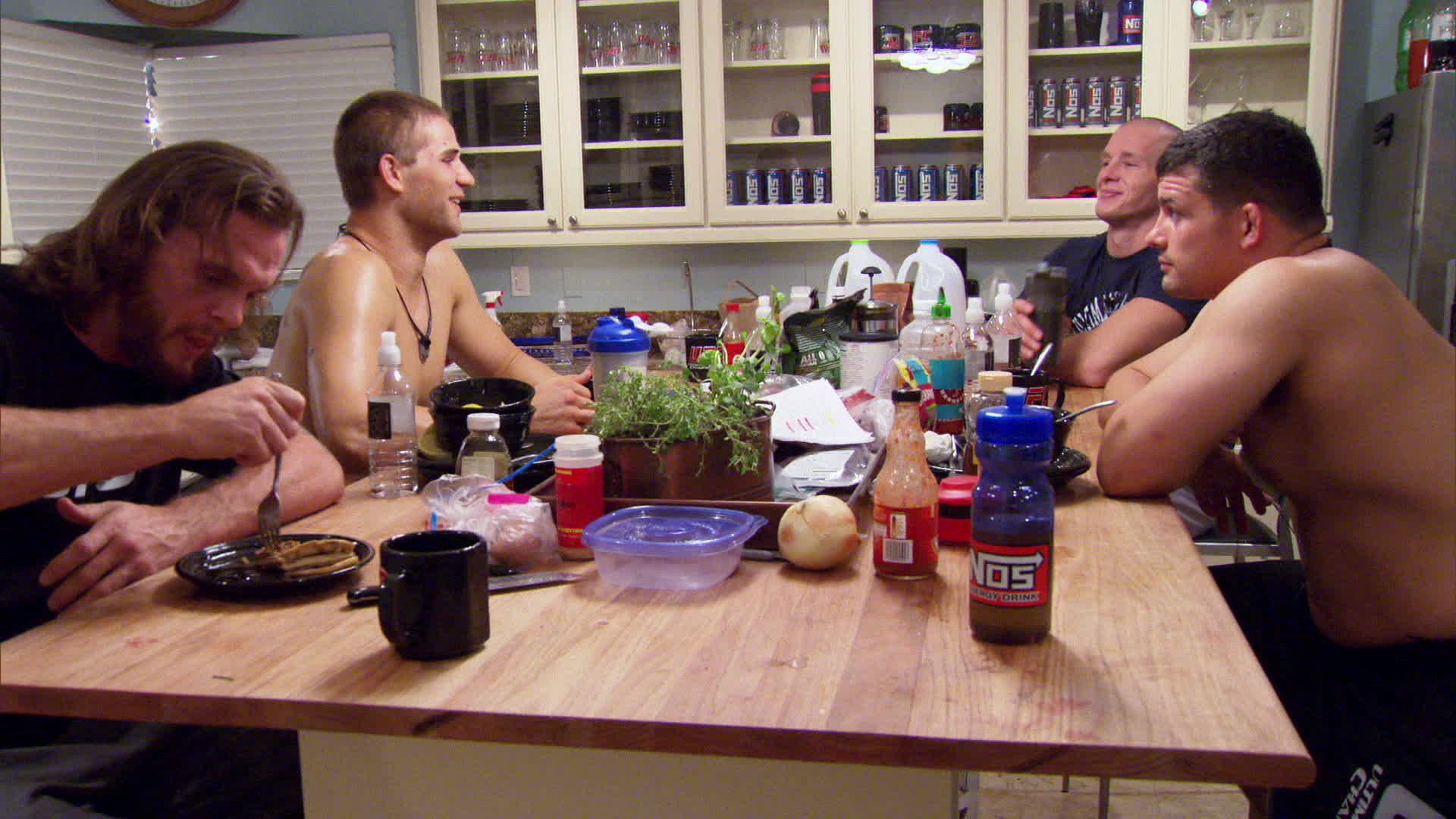 The episode starts with a quick rehash of last week’s fight. In case you missed it, Daniel Spohn took a unanimous decision victory over Todd Monaghan in what we’ll call, “less than exciting,” fashion. The housemates are discussing the fight in the kitchen, and Daniel Spohn defends his performance, calling it “smart.” The fighters don’t have full training camps for the fights and the only goal is to win the finals. When that day comes, you can lay it all on the line. Until then, you have to do what’s necessary to keep yourself healthy and able to continue in the tournament. Matt Van Buren doesn’t fully subscribe to Spohn’s strategy and warns about crossing the fine line into “boring” fight territory. Patrick Walsh agrees with Spohn’s strategy and says, “I would’ve done the same thing.” He criticizes Todd for only wanting to “stand and bang,” and not preparing himself for a full mixed martial arts fight. Walsh actually expresses this sentiment to Monaghan during practice one day, and Todd does not take it very well.

From there we shift focus to this week’s fight between Tim Williams and Dhiego Lima. Having lost the first two fights this season, Frankie Edgar is starting to feel the pressure.  He doesn’t like losing, and desperately wants the momentum to shift. He doesn’t think that he’s being out-coached. Rather, he attributes the two fight losing streak to Team Penn getting the better end of the match-ups. Luckily for him this week he has a fight he would have made himself. Besides an upset Todd Monaghan, Patrick Walsh has another problem on his hands. He herniated a disc in his back a couple years ago and it still flares up from time to time. The timing couldn’t be worse and he’s relegated to doing cardio on the Airdyne bike.

They’re not slowing down at all on the Team Penn side. The whole team is really pushing themselves, and we hear assistant coach Mark Coleman telling them “I want to see someone throw up.” Coach Penn wants the entire team ready for a fight and he’s driving them hard. Unlike the problems on Team Edgar, everything seems to going smoothly despite the intense pace. When asked about Tim Williams’s chances, BJ does not shy back from his prediction. He calls Tim the best guy on the team and even picks him as his top choice to win the tournament.

We cut back to the house and learn more about Tim’s background. The overarching theme is 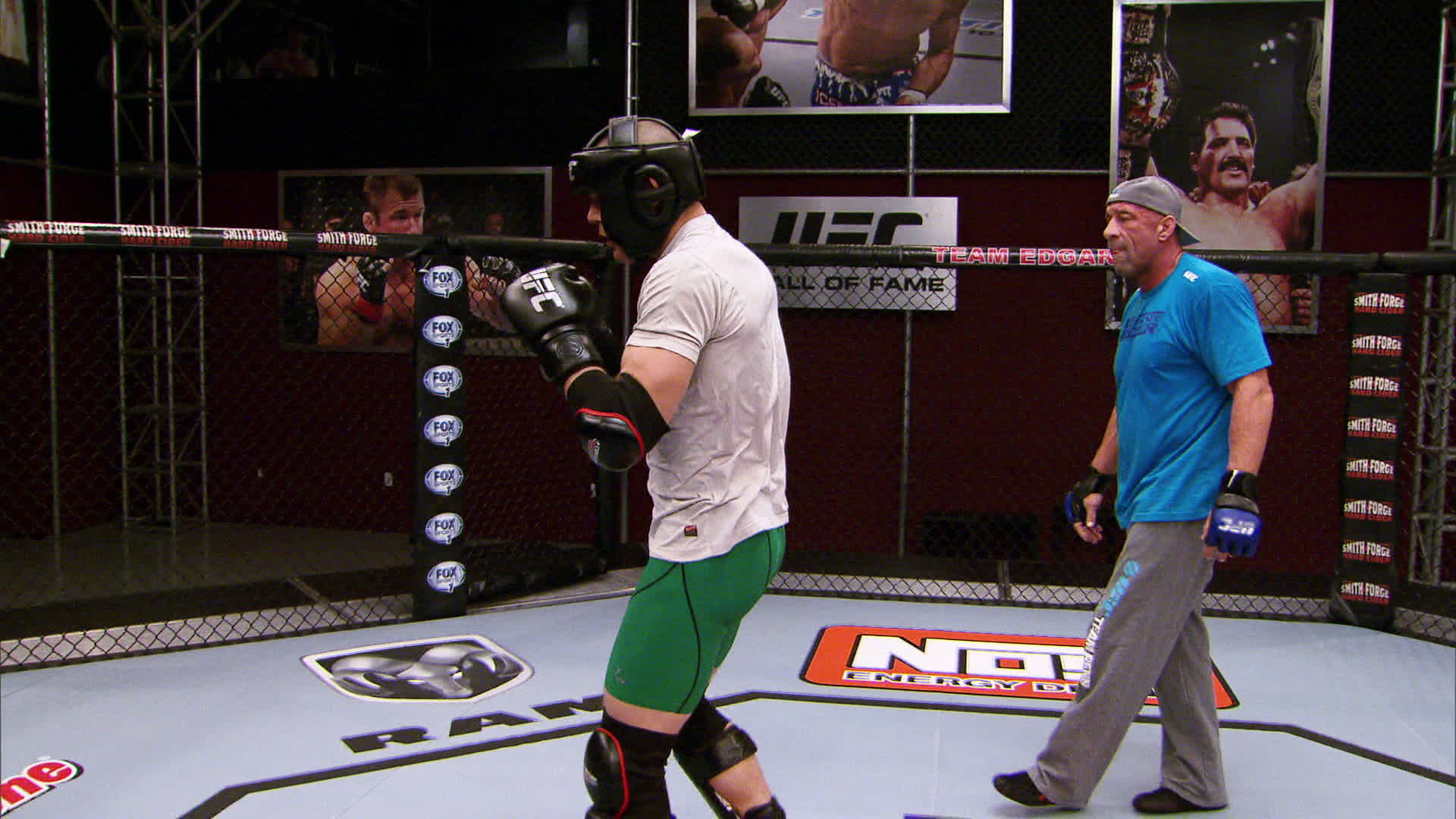 that he knows the benefits of second chances. At the age of 18, he was driving drunk and crashed his car without wearing a seatbelt. Fortunately, no one was hurt severely, but he took that event as a sign to clean up his act. When he tried out for season 17 of The Ultimate Fighter, he lost to Dylan Andrews and never made it into the house. All his life experiences have toughened him up and made him a better person. W later learn that Williams was diagnosed with a  brain aneurysm right before he was set to make his professional debut (against Chris Weidman of all people). After successful surgery he wouldn't let that deter him rom MMA dreams. Whether professionally, legally or medically, Tim Williams has been given second chances in life and he takes advantage of these opportunities. As for his fight style, the Brazilian Jiu Jitsu brown belt describes himself as a “grinder” who doesn't rest at all. He even runs extra miles and does up to 500 situps a day.

As Tim Williams grinds away to become the next Ultimate Fighter, Matt Van Buren continues to grind housemate’s gears. Nicknamed “gutter” a lot of the other fighters dislike Van Buren because he “says a lot of dumb things.” Corey Anderson puts it a bit more politely and says that he “rubs people the wrong way.” Van Buren’s number one target appears to be Irishman Chris 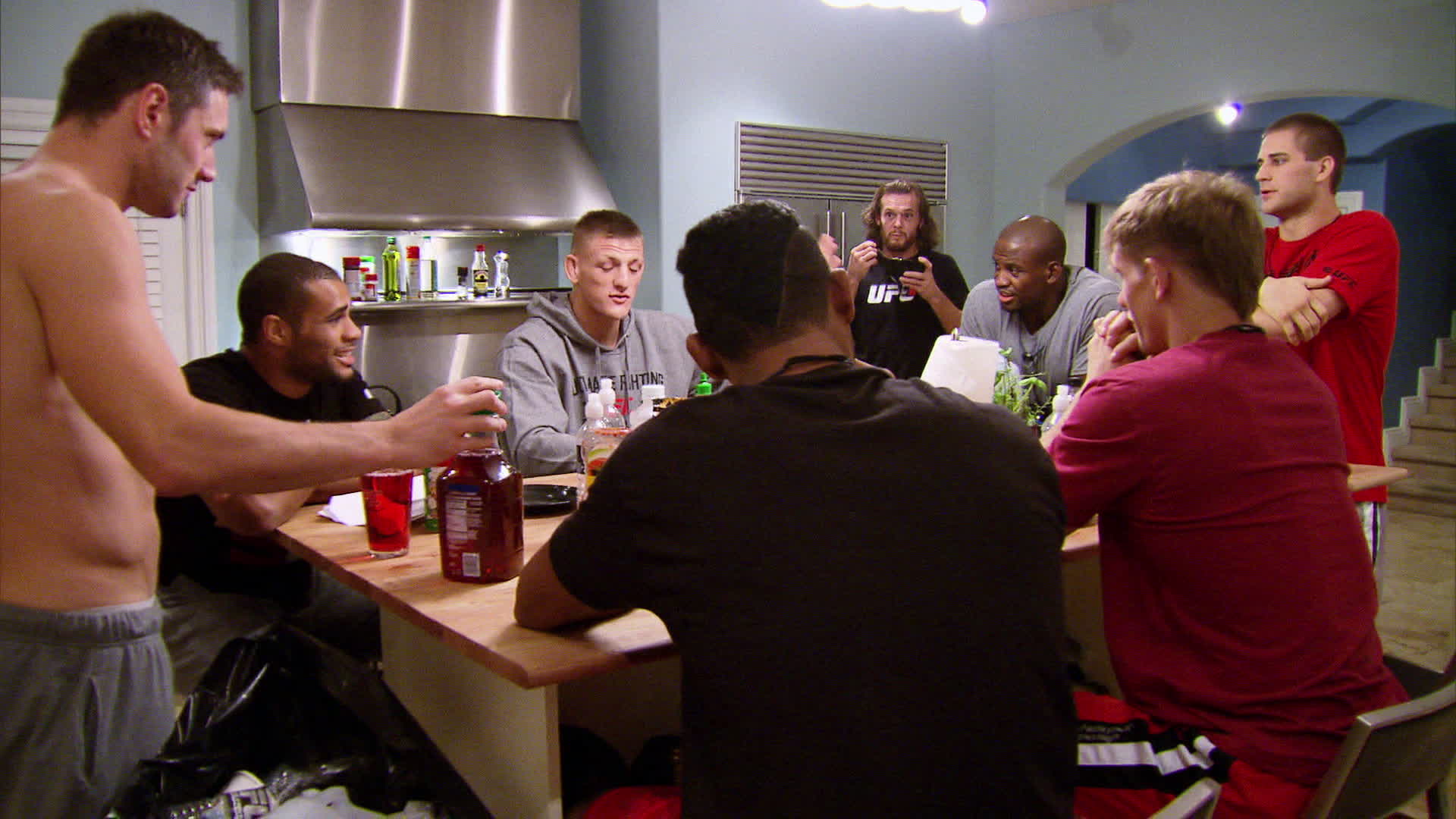 Fields. After the two exchange insults about each other’s accents (Van Buren has a southern drawl) a challenge is thrown down. Van Buren calls out Fields and tells him that they should be the ones to fight next.

Back on the Team Edgar side we hear from Dhiego. He moved to Atlanta at the age of 12 from Brazil and didn’t know a word of English. Growing up, he loved martial arts movies and watched them with his brother and current Bellator welterweight champion Douglas Lima. He remembers watching an old PRIDE fight between Wanderlei SIlva and Rampage Jackson and getting hooked on MMA. Frankie says that Dhiego “can do it all.” As far as the game plan goes, Frankie characterizes Tim’s standup as average. Also, despite Tim’s BJJ background, Frankie thinks he struggles when put on his back. He wants Dhiego to soften Tim up on the feet and then take him down.

Back at the house Dhiego makes the foolish decision of asking the other fighters to help him name his yet to be born daughter. Let’s hope he fights smarter than that, because it’s fight time!

Tim strikes first and connects with a heavy right hand. Dhiego starts to retreat, but Tim keeps the pressure on. He moves in for a takedown and the two are grappling against the fence. Dhiego defends, and Tim tries to soften him up with knees to the leg. They eventually take their toll and Tim brings the fight to the ground. After securing side mount, he throws elbows. Dhiego creates a little space to take half guard, but can’t make it back to his feet. Tim drops a couple more elbows and Dhiego gives up his back. Tim slides one hook in and then secures both with about 1:30 remaining in the round. Realizing he can’t finish the choke, he takes a leg out and starts punching. Then in the last 30 seconds he attempts the choke again. Dhiego survives to see the end of the round, but he was controlled the entire time.

Tim comes out hard again and continues to walk Dhiego down. Lima lands a couple solid counter punches, but Tim walks through them. Knowing he needs to turn it up, Dhiego rushes in, but gets too close and gives up the takedown. Unlike the first round, he’s able gets back to his feet and takes the center of the Octagon. Tim shoots for another takedown, but Dhiego sprawls 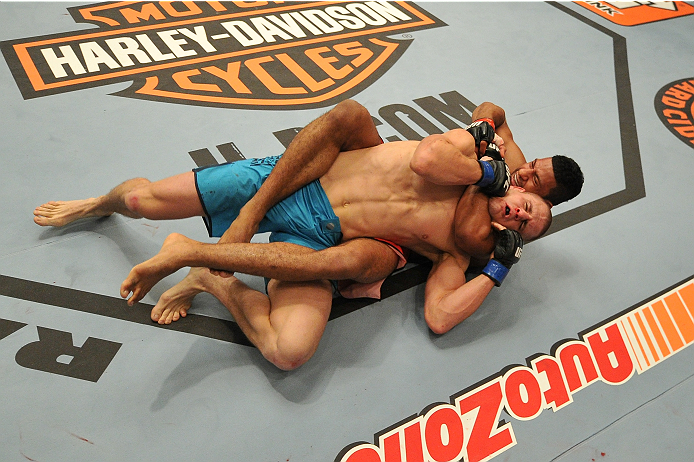 and blocks the finish. Tim keeps pushing and the two are back against the fence. Dhiego reverses position, breaks the clinch and separates. He’s finally starting to find his range and lands some strikes. Tim answers back with a superman punch and clinches up. He drops for another double leg, but is stopped once more. Dheigo must have found a second wind because as soon as he sprawls he instantly transitions to Tim’s back. The change of pace catches Tim off guard and the choke is deep. He taps out with 1:24 remaining.

Team Edgar celebrates their first win of the season as Team Penn sits in stunned silence. Frankie knows that it was a close fight. He gives props to Tim for coming out hard. That coupled with the fact that, “Lima did pretty much everything we told him not to do,” made the first round a clear loss. Dhiego knew this and says that he used it for motivation to push through the second round. All he could think in his head was, “I gotta finish.” The best way to describe BJ Penn’s reaction is “bummed out.” He blames the loss on Tim tiring out. He knows that Tim was in excellent shape, though, so he hypothesizes that the fatigue may be due to him not getting enough rest. Perhaps those grueling training sessions had something to do with it.

Back in the Team Edgar locker room, Matt Van Buren pushes for his fight against Chris Fields, but Frankie turns him down because, “It’s not what we planned.” The announcement comes and it will be Team Edgar’s Corey Anderson against Team Penn’s Josh Clark.

We close out with a sneak peek into next week’s episode. What effect will scaling back have on Team Penn’s performance? Can Corey Anderson even things up? Does Team Edgar decide to bury Matt Van Buren in the woods when they go out on their hike? Find out this and more next week on The Ultimate Fighter!