Read on to find out who won the Ultimate Fighter 19 bout between Todd Monaghan and Daniel Spohn. 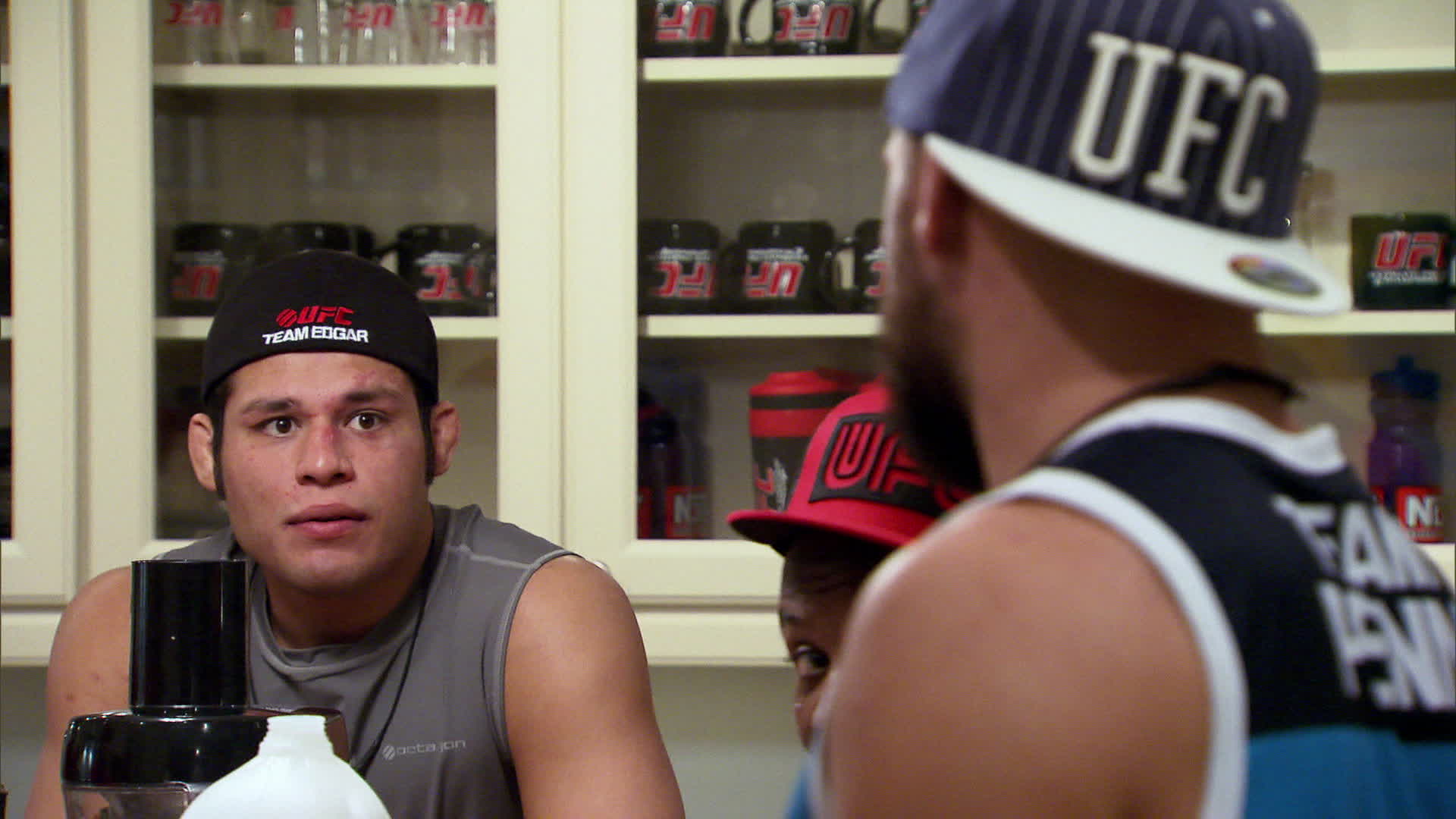 With the first elimination fight of the season out of the way, the tension in the house starts to increase. Team Penn’s Cathal Pendred also notices that the division between the two teams has become even greater. He attributes it to the fact that the “fight makes it seem real,” and last week served as a reminder of how high the stakes can be.

We then look into each team’s training session as they prepare for this week’s fight between Todd Monaghan and Daniel Spohn. On the Team Edgar side, the legendary Renzo Gracie shows up to lend some knowledge. Todd calls is the highlight of the show thus far. “Renzo Gracie is one of my heroes. He’s an amazing individual.” As Renzo shows Todd some escapes off the cage, Frankie really focuses on solidifying some of Todd’s gaps. The major one that he seems to be worried about is Todd’s tendency to keep his chin up high. Against a power puncher like Daniel Spohn, that’s a recipe for disaster. As far as game plan, he wants Todd to continue to move forward. He’s an unorthodox striker, whose best success comes with a pressured attack.

On the Team Penn side, BJ shows off some slick armbar transitions. He also has a lot of praise for the former construction worker Daniel Spohn. “Daniel is off the radar, but I’m expecting big things. He just might knock out everyone in the show.”  Daniel Spohn may have earned his way into the house with a blistering knockout, but he doesn’t want to be pigeon holed as only a striker. He considers himself a well-rounded fighter, and would like to show that off. Even BJ entertains the idea. “Maybe I’ll switch it up on [Team Edgar]. Go with the ground and pound.” Spohn doesn’t appear to be worried about his opponent. “I don’t really know a lot about him. I just know that he’s a guy that I can break.”

Back the house, pastor and traveling preacher Todd Monaghan talks more about his 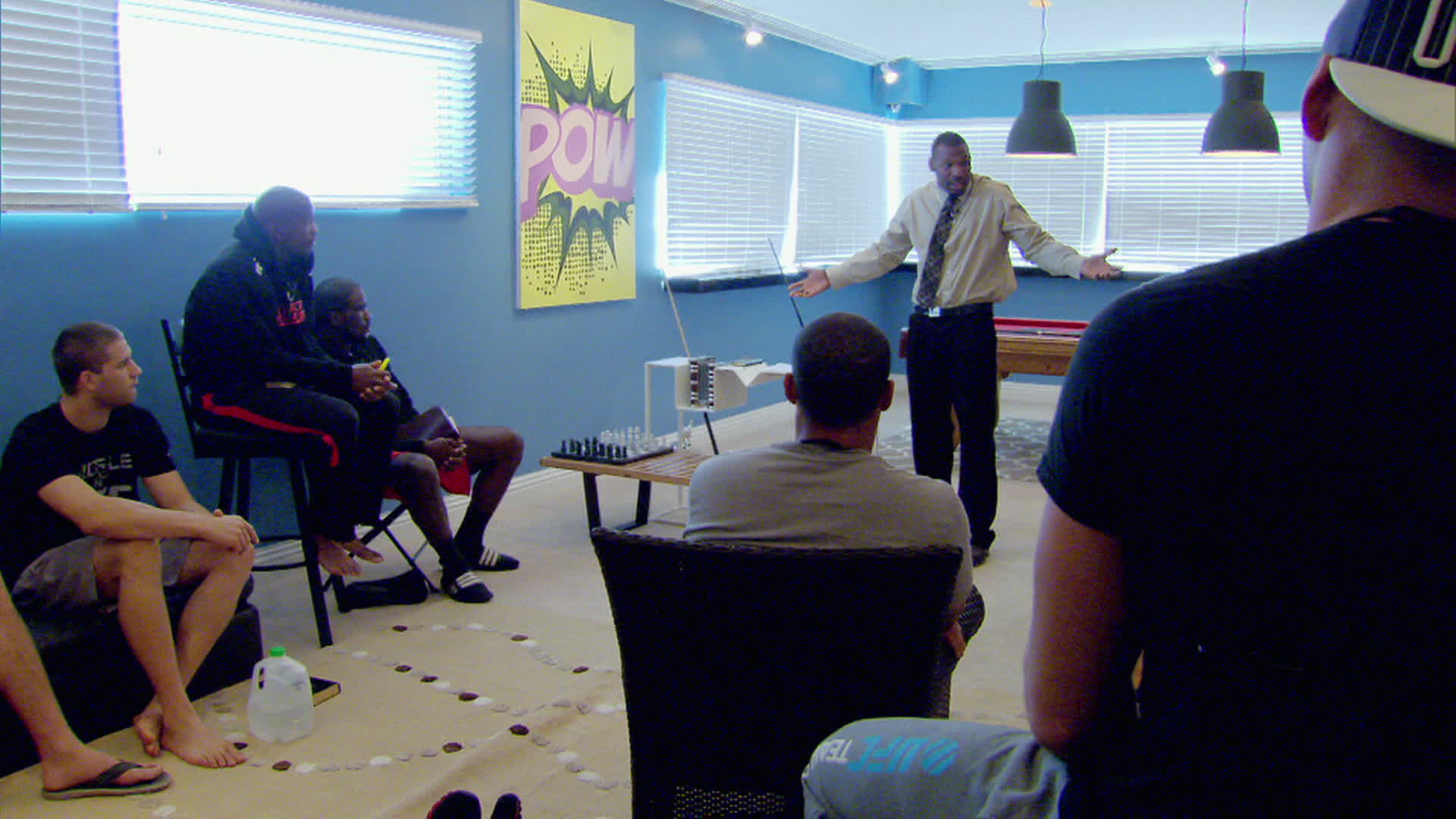 background. Adopted by a white family in Iowa, he often was teased by the other black students. This lead to him getting into fights, and “selling some things that I shouldn’t.” One day he found God, though, and he gave up the thug life. He holds Sunday services with the other fighters in the house and preaches the Gospel to them. He also talks about all the “blessings” that God has given him and mentions many of his material possessions. These comments rankle many of the housemates, especially Cathal Pendred. He believes that if Todd were really a Man of God, he’d sell off his possessions. “Actions speak louder than words, and [Todd’s] all words.” He chalks up Monaghan’s sermon to the preacher looking for TV time and a way to promote his Christian MMA camps.

Later on, Todd Monaghan has to deal with another housemate that doesn’t appreciate his attitude. As Team Edgar is sitting around the fire outside, teammate Corey Anderson calls Todd out on his overconfidence. He worries that Monaghan’s inability to admit his weaknesses or consider defeat makes him mentally weak. Todd disagrees and says that he doesn't bring negative thoughts of losing into his mind. Fortunately, there’s one way to find out who’s right. It’s fight time!

Daniel comes out in his southpaw stance and scores right away. He lands a solid inside low kick and later drills Todd with a heavy left cross. He chases the stunned Monaghan down and follows up with a takedown. Working from half guard, Daniel slowly advances position and moves to full mount. He doesn’t throw a lot of punches, but does work to secure an arm triangle. Todd frees his arm, but remains stuck in mount. Finally he’s able to shrimp out and move to his feet, but Daniel plants him right back down on the mat. Todd reaches for a kimura on bottom, but Daniel hides his wrist so Monaghan can’t exert enough leverage to force the tap. They scramble and Daniel moves to take the back. He’s too high, though and Todd slams him over his head. As Daniel slips, he moves to armbar. He can’t finish, and Todd starts throwing wild ground and pound punches. As Todd flurries, Daniel sweeps the legs and ends up back on top position. He moves back into the full mount, but the round expires before he can unleash any offense.

Todd comes out aggressive and initiates contact. He throws a Superman punch than runs forward swinging punches. Daniel weathers the storm and lands another takedown. Todd briefly makes it back to his feet, but Daniel wastes no time bringing this the ground again. Todd goes for a guillotine and then a kimura, but neither one of the holds shows much promise. Daniel holds top position and throws some ineffective punches. We see an inlay of Dana White’s reaction and he’s none too pleased. He admits that Spohn has the dominant position, but doesn’t understand why he isn’t doing anything with it. Sphon continues to smother Todd, and the preacher has nowhere to go. He finally gets back to his feet with 24 seconds left, but Daniel drags him down and takes his back. The round expires with Spohn working for a rear-naked choke.

The judges’ scorecards come back and they’re all unanimous for Daniel Spohn. Todd may be disappointed in his performance, but he’s angry at himself for his lack of preparation. He was so worried about Spohn’s punching that he neglected other aspects. “I was preparing for a standup fight, not a mixed martial arts fight.” The Team Penn fighter “feels good” about his performance. He showed off a lot of his other skills and moved on to the next round.

Dana White, on the other hand, we’ll just say he’s not very enthused. Spohn hurt Monaghan early in the first round with his hands, and then proceeded to wrestle him for the entirety of the fight. The UFC President may be unhappy with Spohn’s lack of offense, but he also has some choice words for Todd Monaghan. Todd had Renzo Gracie in his corner and he didn’t listen to any of his instructions. “You might as well have me in your corner!” he laments.

We move to the fight announcement and it will be Team Edgar’s Dhiego Lima against Team Penn’s Tim Williams. BJ believes that Tim’s size/cardio advantage will be the difference makers. Frankie loves the pick because his considers Dheigo one of the best fighters on the team. Dana White loves the fight because it’s “impossible to suck as bad as the last fight did.”

On that pleasant note we wrap up with a sneak peek into next week. Does Team Penn keep their undefeated record? Can Team Edgar keep from imploding? Why is Matt Van Buren making more enemies than Todd Monaghan? Find out this and more next week on The Ultimate Fighter!