Recap of episode two of The Ultimate Fighter 19, featuring the bout between Cathal Pendred and Hector Urbina. 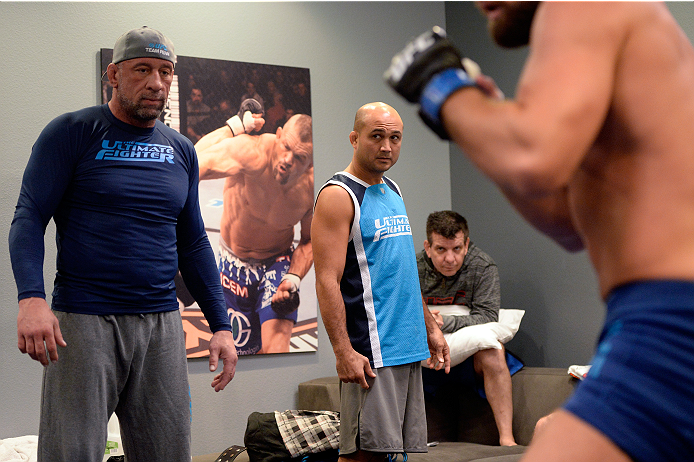 The episode opens with the fighters arriving at the house and picking out their bunks. Many of them are excited for the opportunity, and it’s finally starting to hit home that they’re on The Ultimate Fighter. There’s no time to admire the decor, though, as we immediately move into breaking down this week’s fight between Team Penn’s Cathal Pendred and Team Edgar’s Hector Urbina. Even though he didn’t have to fight to make it into the house, Pendred isn’t short on confidence. “I know that I’m better than [Hector] everywhere.” He considers himself an all-around threat and wants to make a statement to the entire house. Hector knows that Pendred is already looking past him, but doesn’t mind the Irishman’s confidence. He tells us, “Cathal doesn’t understand what he has coming.”

We glimpse into each team’s training session. BJ Penn is amazed at all the talent on the mat and excitedly states that, “This is the future of Mixed Martial Arts.” Frankie Edgar knows that TUF can be a grind and he wants to instill in his fighters the mental toughness that made him a world champion. We then see each coach’s support staff. BJ Penn has brought Andre Pederneiras (striking coach to UFC champions Jose Aldo and Renan Barao), Jason Parillo and UFC hall of famer Mark “The Hammer” Coleman. Frankie Edgar brought his normal fight camp coaching staff including: Mark Henry, Stephen Rivera, Ricardo Almeida and Ali Abdelaziz.

After a break we learn more about Irish prospect Cathal Pendred. The stakes are high for every fighter, but the pressure seems to be a bit greater with Pendred. The expectations for him exceed those of the other fighters on the season. Dana White comments on how people have been hassling him on the internet to bring Pendred to the UFC, and now is the opportunity to “see if he belongs.” Coach Penn admits to knowing little about Cathal other than “He has a lot of hype.” As for fight strategy, BJ doesn’t want Cathal to try to scramble and wrestle with Hector. He wants him to make it a fight and box Hector on the inside. Cathal doesn’t pay much attention to the talk about him. he believes in his abilities and doesn't worry about proving anything to anyone. One thing he does realize, though, is that he has a responsibility to his heritage. Irish MMA was in its infancy when he first began competing. It’s become increasingly more popular the last year or so, but Pendred wants to be a role model to the next generation of Irish fighters.

Next we hear from his opponent Hector Urbina. Born in Mexico, Hector moved to Ohio when he was 7 years old and immediately picked up wrestling. Eventually he moved to MMA and is ready to derail the Pendred hype train. Cathal may bear the responsibility of an entire country, but Hector fights for his three younger brothers. He acknowledges that he’s the underdog, and relishes the role of spoiler. “I hear this guy is some kind of badass, and I like that.” Hector has no intentions of baking down. He’s going straight at Cathal and push the pace. Frankie echoes this strategy. “Hector is a pressure fighter and that’s what we want him to do.”

When weigh-ins come around, things get a little heated. With each fighter draped in their country's flag, they stand nose to nose without either backing an inch. At the very end Hector starts to yell, and Cathal couldn’t be bothered. “[Hector’s] pretty emotional right now, and he won’t have a clear mind when we’re fighting.”  We’ll see if that prediction holds true, because it’s fight time!

Hector comes out with his hands low. Cathal rips an uppercut and the two clinch up. Hector drops to shoot, but Cathal sprawls. They separate, and Hector charges forward just like he said 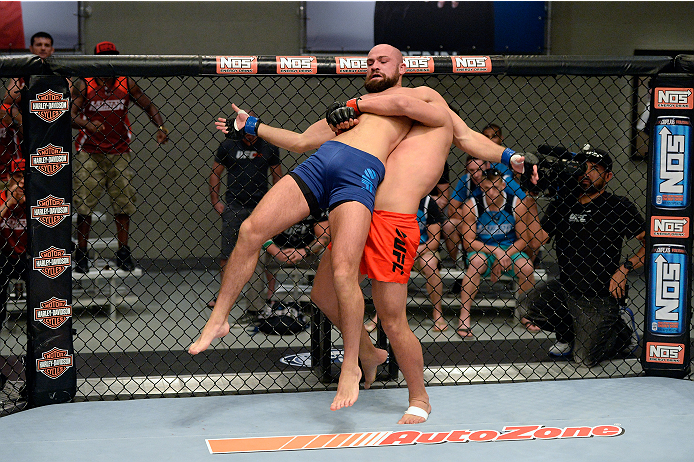 he would. He catches the Irishman with a couple hooks and a hard right hand. They clinch against the fence and Hector connects with more dirty boxing. He’s fulfilling the plan that BJ Penn actually created for Cathal! One of these punches drop Cathal and Hector rushes for the finish. Cathal returns to his feet, but Hector slams him back to the ground. Hector works from side mount, and attempts a kimura. After that fails, he starts punching and throwing short elbows. Cathal rolls to return to his feet, but now finds himself in a standing guillotine. He gets his head out, but eats a knee for his troubles. The knee must have awoken something in him, because he starts letting his hands go. With less than a minute remaining, Hector scores a takedown, but Cathal returns to his feet. The round expires with the two fighting for position against the cage.

Frankie implores Hector to keep his hands up and BJ tells Cathal to stop trying to go punch for punch. He tells him to, “Hit and get away!” Cathal listens to his corner and picks and chooses his strikes better in the opening part of the second round. Hector rushes in to counter, but Cathal brings him to the mat with a well-timed double leg. Hector rolls over, but Cathal controls him form the front headlock position. They make it back to their feet, but don’t spend much time there. Cathal flurries again and takes top position with another takedown. They return to the front headlock position and Cathal controls him and lands knees. In the final seconds of the round Hector switches position and winds up on top, but time expires before he can do anything with it.

The judges have it at one round apiece and we’re headed to sudden victory!

The two trade kicks, Cathal lets his hands fly. Hector shells up and opens himself up for the takedown. Cathal seizes the opportunity and controls Hector from front headlock again. You hear Frankie Edgar scream for Hector to move, but the pleas fall on deaf ears. Hector eventually tries to make it to his feet, but Cathal snaps him back down. Hector finally gets loose, but he has less than a minute to work. He dives in for a big punch, but ends up on his back again. Hector makes it to his feet once more, but the round ends with Cathal in control. 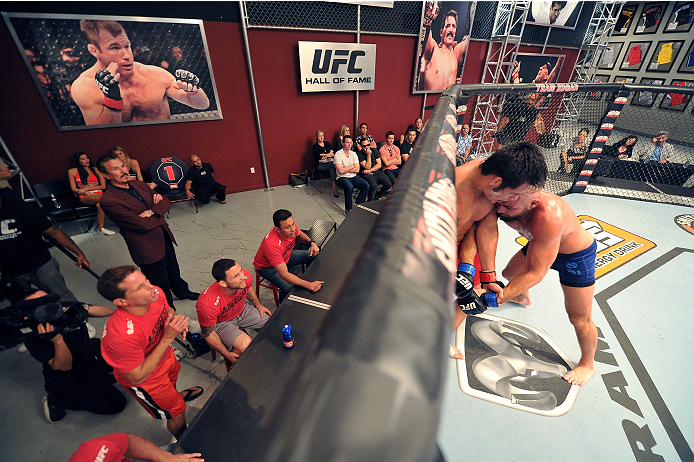 The judges’ scorecards come back and Cathal takes the unanimous decision. BJ confesses that he underestimated Hector’s punching power and thought Cathal was going to get knocked out in the first round. According to the Prodigy, the turning point was the fact that Hector burned up too much energy and Cathal pounced on the opportunity. A visibly frustrated Frankie Edgar iterates this point and says that Hector looked for the finish instead of looking for the win.

The fight announcement comes and it will be in the light heavyweight division. Team Penn’s Daniel Spohn will take on Team Edgar’s traveling preacher Todd Monaghan. Frankie cautions us to not count out Todd while BJ states that Daniel is “going to knock out everyone he faces.”

Everything wraps up with a sneak peek into next week’s episode. Can Team Edgar rebound? Does Daniel Spohn live up to to BJ Penn’s praise? How many different pronunciations of Cathal will we hear? Find out next week on The Ultimate Fighter!