Recap from the 11th episode of The Ultimate Fighter, featuring the light heavyweight fight between Corey Anderson and Patrick Walsh. 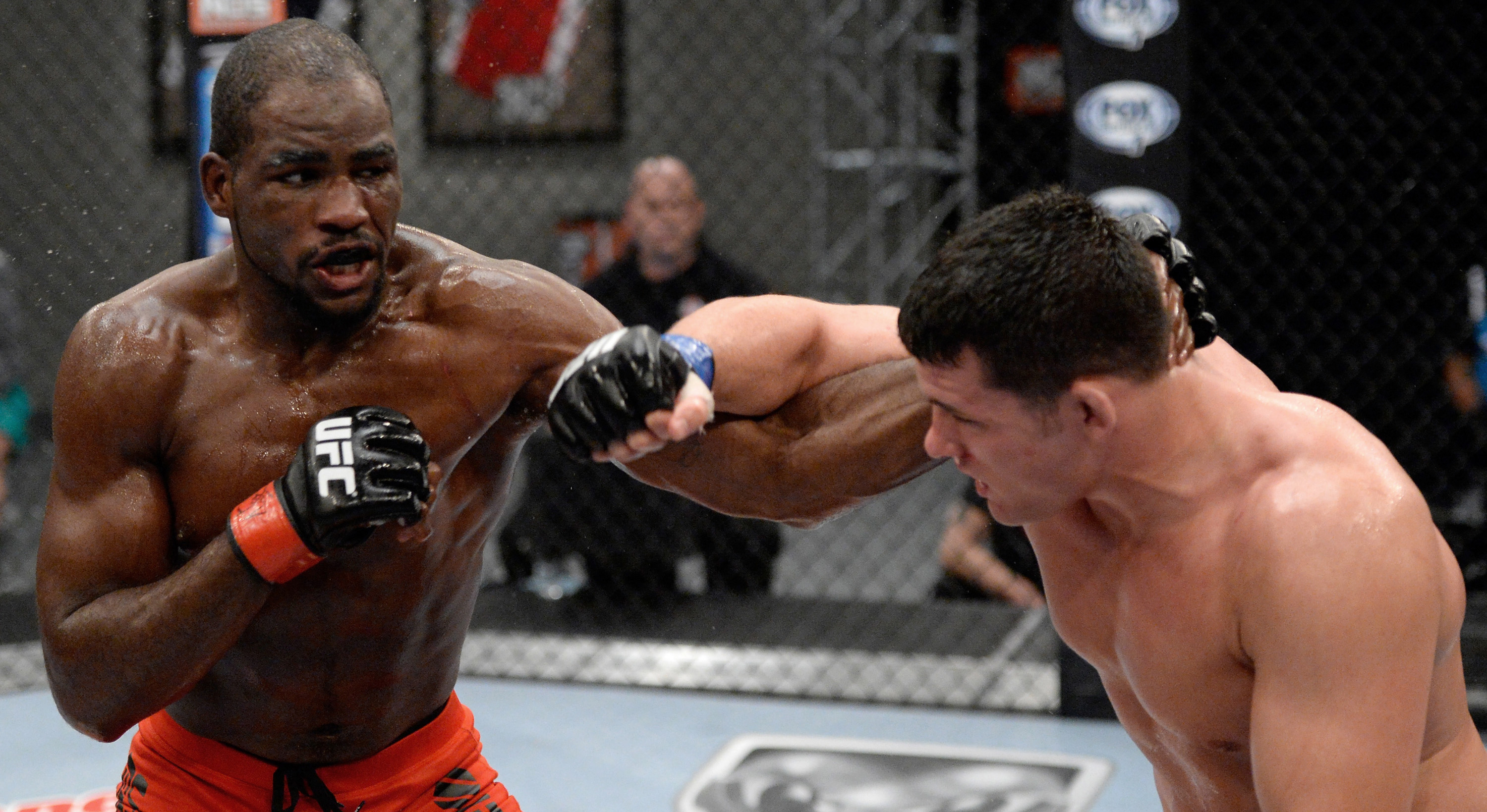 The tensions are high as Team Edgar teammates Corey Anderson and Patrick Walsh finally square off this week. Frankie and the rest of the coaching staff don’t want to pick sides, so they decide to let each fighter pick two teammates to corner them for the fight. Going into the season, Frankie knew that a situation like this could arise, but he still doesn’t like it. Among the two combatants, though, they’re not mincing words. Corey calls Pat “mentally weak,” and believes he’ll gas out eventually. Pat admits that Corey looks incredible in practice, but he’s quick to remind us that “this isn’t practice.”

Speaking of practice, Pat fears that that Team Edgar has taken the foot off the gas in the closing weeks. With only one practice a day, he doesn’t think that’s enough mat time for him to get that final push to the finals. As a result, he asks Frankie and BJ if it would be alright if he stuck around to train with Team Penn. Both agree, but it seems like Patrick should have cleared it with his teammates first. Corey discusses the situation with Dhiego Lima and both agree that if Pat wants to train with Team Penn, he should leave their team. He has to choose a side. Corey later confronts Pat at the house and accuses him of being disloyal. Eddie Gordon even calls Walsh the “T” word -- turncoat.

Frankie calls a team meeting and tells Pat that he made a mistake. He shouldn’t have let Pat train with Team Penn, and that it’s unfair to the rest of the team. To settle things once and for all, Frankie tells Pat that he has to make a choice. He can either stay with Team Edgar or switch sides and move to Team Penn. Pat storms out and becomes very emotional over the issue. Choking back tears, he says, “I should be focusing on my fight. I shouldn’t have 10 people giving me [expletive] about it.” Eventually he calms down and chooses to stay with Team Edgar. Frankie is happy to hear it and tells everyone that the situation is settled and no one needs to speak about it any more. Will the emotional stress have an impact? We’ll find out now because it’s fight time!

Pat comes out in a southpaw stance while Corey works from orthodox. Pat holds his hands low and swings big, wide punches. Corey has a bit more composure and finds the mark with his 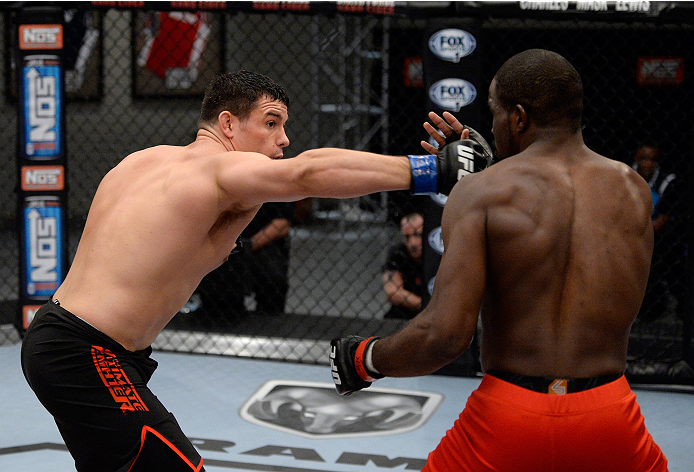 right hand. One of these right hands rocks Pat and he stumbles. Corey keeps the pressure on him and lands a knee in the process. Pat tries to get away, but Corey won’t give any breathing room. He charges forward, secures the takedown and immediately moves to mount. Pat quickly makes it back to his feet, but a visibly gash appears under his right eye. He still throws haymakers, but Corey times them and scores another takedown. Pat makes it back to his feet, but he struggles to land and significant punches. He pulls guard in the closing seconds and takes top position, but the round ends before he can do anything.

Check out more Octagon photos from Anderson vs. Walsh!

Pat’s big punches connect in the early moments of round two. He uses these punches to push Corey against the fence and score a takedown of his own. Corey easily returns to his feet and throws his first kick of the fight. Even with Pat holding his hands down by his waist, the majority of the round looks like a boxing match with small gloves. Corey moves for a takedown at the 1:40 mark. Pat defends, but he can’t protect himself from the knee that crashes into his face. Dazed, he scrambles to his feet waiting for the next attack. Corey doesn’t go for the finish, and Pat dives for a takedown to buy himself some time. Corey fights it off and the two return to their feet with 30 seconds to go. Pat attempts another takedown, but Corey blocks that one, too. We’re heading to a third and decisive round.

Go behind the scenes of Anderson vs. Walsh!

The two continue boxing and Pat keeps shooting from the hip. Corey can’t take advantage of the 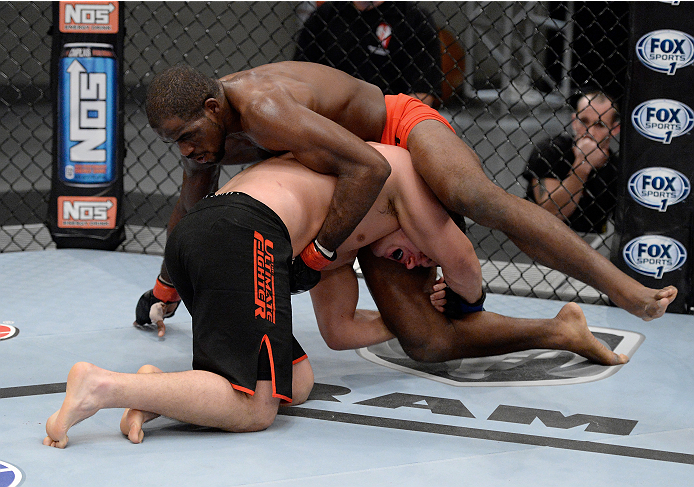 opening, but Pat doesn’t seem to threaten either. Pat pushes forward and briefly puts Corey on the mat, but he can’t hold him there. Both fighters look fatigued and neither can string together extended combinations. The output has slowed down, but Corey’s punches land at a higher rate. Corey finally shoots with 20 seconds remaining, but Pat defends. Corey follows up with a knee and Pat counters with a double leg. Just like the first round, time expires before Walsh can capitalize. The judges will decide who makes it to the finals.

Frankie admits that he was nervous, and could barely stay quiet on the sidelines. He gives Corey the edge, but is amazed with Pat’s toughness. Dana White echoes the praise of Pat’s toughness, but also calls him a “mess” technically. The UFC President also dubs Walsh, “The Zombie.” The scorecards come back and they’re all 30-27 for Corey Anderson.

The show wraps up with a sneak peak into next week’s episode. Can Dhiego Lima defeat last pick Roger Zapata? Does Matt Van Buren back up all his tough talk against Daniel Spohn? How many rhinos does Chuck Liddell knee when he shows up to practice? Find out this and more next week on The Ultimate Fighter!

ALSO CHECK OUT PREVIEWS FOR: