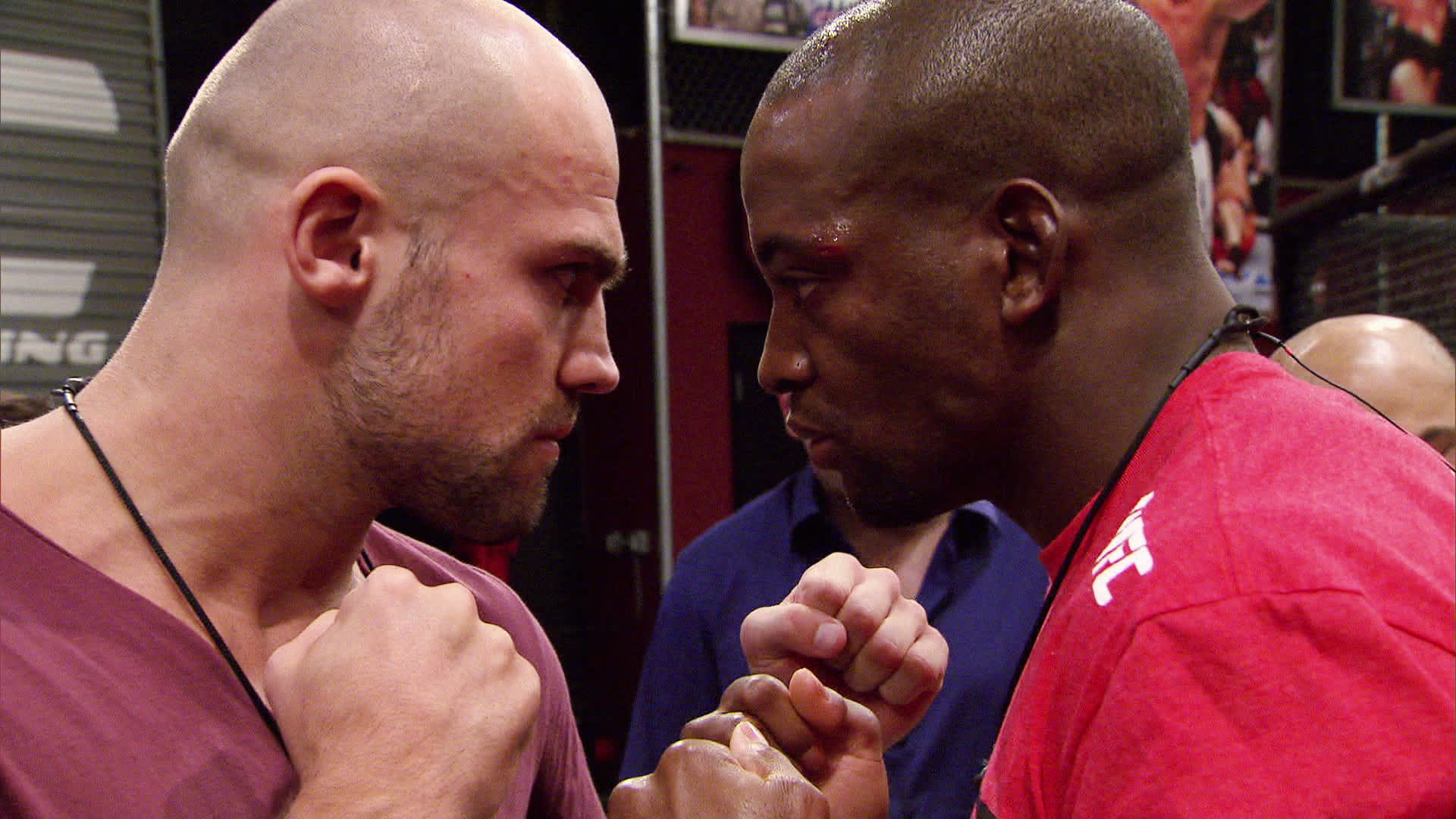 The episode opens up at the TUF house in the aftermath of last week’s lackluster fight between Matt Van Buren and Chris Fields. Van Buren came away with the win, but his sluggish performance drew the ire of UFC President Dana White and the condemnation of fellow cast mates.

Matt takes partial responsibility for the fight, but he also has a lot of excuses. At first he says the strategy was intentional. He had to “play it smart,” in order to make sure he didn’t suffer a cut that would jeopardize his chances in the semifinals. He also tries to appeal to the the other fighters’ egos by saying that everyone on the show is so tough that it’s really difficult to try to finish one.

As Van Buren makes excuses, the fighters that have been eliminated raid the liquor cabinet. It has your usual drunken revelry -- an intoxicated Irishman and a naked guy. Although sometimes they can be the same person, neither Chris Fields nor Cathal Pendred were in the nude.

That title belongs to Tim Williams. While taking off his clothes  in front of the cameras may have been a poor choice, he did add to the history of TUF drinking catchphrases with his repeated, “Let’s get busy!” chants. It’s no, “Let me bang bro!” but then again, what is?

Back on Team Edgar, Frankie discusses how teammates Corey Anderson and Patrick Walsh will have to fight one another in the semis. It’s not an ideal situation, but they all knew that it could happen. Frankie refuses to choose sides and tells the fighters that they’ll have to find teammates to help them out. While that’s not too surprising (we’ve seen similar in previous seasons) what followed next was a TUF first. During practice,

Corey and Patrick wind up sparring each other. Walsh doesn’t have a problem with the situation because, “He’s exactly like the person I’m fighting.”

Next we switch gears to the first semifinal fight between Team Edgar’s Eddie Gordon and Team Penn’s Cathal Pendred. Frankie states that Eddie needs to keep this fight standing in order to win. Cathal likes to push people against the fence and control them, and Eddie plans on using feints and fakes to avoid that.

BJ Penn and Cathal know that Eddie doesn’t want to grapple, so they plan on going straight at him right from the beginning. Eddie can’t box if he’s on his heels!

Before the next round starts, Dana White brings the remaining fighters to the MGM Grand. Filmed right before George St. Pierre’s title fight against Johny Hendricks, Dana feels that this atmosphere is the perfect opportunity to try to motivate them. He wants them to know that they’re one fight away from competing in front of all these people. Does it work? We’ll find out soon because it’s fight time!

Cathal turns out to be a man of his word. As soon as the first round starts, he swings a couple haymakers and backs Eddie against the fence. They break, but the Irishman jumps right back into the fray. Eddie scrambles and nearly takes back mount. He can’t get both hooks in, though, so Cathal escapes. Back on the feet, Cathal connects with a spin kick and charges forward once more.

He pushes Eddie against the fence, and they jockey for position. Cathal eventually finishes the takedown, and we hear BJ Penn screaming, “ELLLLLLLLLLLLBOW!” from the corner. Before Cathal can follow orders, Eddie returns to his feet. The two continue to battle against the cage, and they’re expending a lot of energy in the process.

Cathal won’t be denied and scores another takedown. In the closing moments of the round, Cathal takes back mount, but time expires before he can finish the choke.

Cathal begins the second just like the first. He rushes forward and pins Eddie against the fence. Eddie fights desperately to get one underhook, and uses that to get some separation. Cathal tries another spin kick, but this one misses by a large margin.

Both men look tired and take a moment to catch their breath. Cathal winds up for a spinning backfirst, but Eddies uses that opening to secure a takedown of his own. He can’t advance position, but he does throw some ground and pound that connects.

After trying to get around Cathals legs, Eddies pulls out and the two are back in the center of the Octagon. Cathal pushes forward, and the two finish the round in the clinch.

Knowing his back is against the wall, Eddie Gordon starts the third round swinging big, wide hooks. They’re only glancing blows, but his right hand does start to find its mark. Cathal opens up his striking attack and Eddie shoots for a takedown.

Cathal defends and then answers with an attempt of his own. Like previous rounds, Cathal pushes Eddie to the fence and grinds him down. Eddie stays on his feet, but he can’t generate much offense. As BJ pumps up his team with “Ole!” chants, and Frankie yells at Eddie to get going, but fighters dig deep into their reserves.

WIth about ten seconds left, Eddie connects on his biggest punch of the fight, but time runs out before he can capitalize.

The judges come back with a split decision. It all came down to that third round, and two judges gave it to Eddie Gordon. He’ll be moving on to the finals. Dana thinks that Cathal should have one, but admits that it was an extremely close fight and wouldn’t call it a robbery by any means. We wrap up with a preview into next week’s episode.

How does Team Edgar handle having teammates fight one another? Why does Patrick Walsh practice with Team Penn? Does Tim Williams take his clothes off? Find out this and more next weed on The Ultimate Fighter!