Check out all the results from The Ultimate Fighter 19 elimination fights! 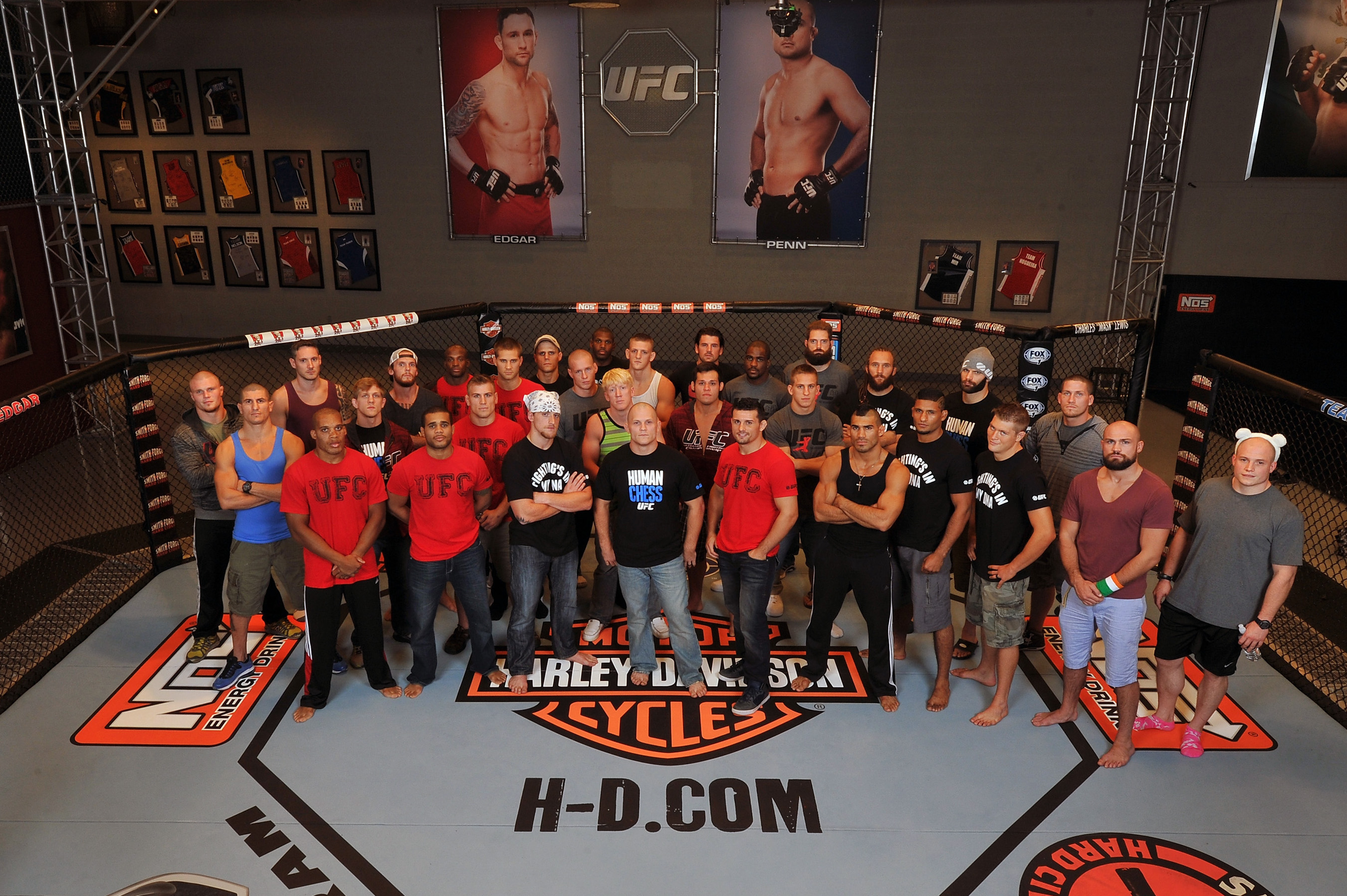 Dana begins by introducing this season’s format. Fighters will come from the middleweight and light heavyweight division. The coaches this season will be former world champions Frankie Edgar and BJ Penn. Normally TUF coaches have a personal vendetta against one another, but that’s not the case this time. BJ has lost to Frankie twice before and asked for the fight because, “Frankie represents a guy I need to get past.” After some small chit chat between the two, we get right down to business.

Tyler king was a football prospect who snapped his ankle his senior year. Despite making an NFL roster, the injury was too much for him to overcome and found a second career in MMA. Spohn is a father of four out to prove he’s the “toughest dad in the world.” Spohn opens with a body kick. King charges in and Spohn connects with a right hand that causes King to face plant. One punch and one kick are all Spohn needs to advance into the house.

Hector opens with a jab, cross combination then shoots for a takedown. Miles defends initially, but Urbina scrambles and takes the back. Miles rolls and makes it back to his feet, but Urbina takes him down again. As Miles tries to make it back to his feet, Urbina locks up a guillotine choke. Miles tries to fight, but it’s in too deep and he taps early into the first. BJ Penn is impressed with Urbina’s performance and calls him “the real deal.”

Heun tried out for season 17 of TUF, but couldn’t make it into the house. He calls this his last chance for a career in MMA. Monaghan is a traveling evangelist who runs Christian MMA camps for kids. Heun comes out fights like a man who knows his back is against the wall. He hits Monaghan with everything. Punches, takedowns and kicks all seem to connect. Heun puts Monaghan on the mat and almost finishes a north-south choke. Monaghan’s gets his guard back and Heun starts punching. Out of nowhere, Monaghan throws up an armbar and Heun taps. Monaghan’s miracle submission after losing the entire fight earns him a spot in the house.

We see Ireland’s Cathal Pendred. He moves into the house without a preliminary fight because of injuries to opponents.

Zapata doesn’t finish, but he controls the fight from beginning to end. Unlike Jake Heun, he doesn’t get caught in a desperation submission and picks up the unanimous decision.

Good is a former Bellator champion with a lot of experience. Stephens knows this and doesn’t seem scared at all. That confidence turns out to be well placed. Stephens takes Good down repeatedly and works from top position. Good can’t stay on his feet and loses the decision.

A newlywed, Irish fighter Chris Fields has been away from his wife longer than they’ve actually been married. Stansbury is a self-described momma’s boy who has been wrestling since he was six. Fields attacks with a lot of kicks and Stansbury is content to box. Stansbury lands a couple big overhand right hands that nearly knock Fields out. Fields holds on, but Stansbury moves in for a trip takedown. He finishes it, but he blows his knee out in the process. The referee stops the fight and Chris Fields advances due to injury. Conor McGregor is cageside and credits the luck of the Irish for the win.

Mumma starts the round strong with a hard body shot and a single-leg attempt. Berzin brushes him off and counters with a takedown of his own. He quickly moves to back mount, but is too high. As Mumma tries to shake him off, Berzin transitions to armbar and finishes the fight. Frankie Edgar likes what he sees and calls Berzin “a guy you have to watch out for.”

Williams is another person getting a shot at the TUF house. He lost to Dylan Andrews on the 17th season of The Ultimate Fighter as was invited back. Velickovic’s girlfriend stops by to visit him and they have a very passionate embrace. And by very passionate,
I mean they go at each other like hormonally charged teenagers. Despite that, Velickovic comes out strong in the first round, but starts to fade in the second. Williams takes advance of this and starts to increase his offense. By the third round, Velickovic is completely exhausted and Williams quickly finishes the fight by TKO.

Gabel has never seen a decision and Gordon trains with UFC middleweight champion Chris Weidman. Gordon is huge for middleweight, and he showcases his punching power. BJ calls him the hardest puncher on the show. Gordon uses that power to cruise to the unanimous decision win.

Poppie is bi-polar and credits MMA for giving him a routine and helping him see the positive in life. Clark is nicknamed “The Hillbilly Heartthrob,” whose full time job involves disabling landmines for the US military. This is a back and forth fight that makes it to the third round. Clark’s jiu jitus prowess helps him that final round as he works a triangle to armbar transition that secures the tapout.

Walsh is a Boston guy that’s been wrestling since the 8th grade. He also earned a scholarship to wrestle at Ohio State. Doug Sparks is a supposed “genius” who always wears faux polar bear ears on his head. The reason? “My father was on an expedition to the arctic circle and he knocked up a polar bear.” Yes, you did read that correctly. All that polar bear DNA doesn’t help Sparks in MMA. Walsh slams him right off the bat and works from top position. Sparks attempts a guillotine, but Walsh defends and moves to side mount. His kimura attempt doesn’t initially work, but he keeps at it and Sparks taps out.

The two trade jabs and spend the majority of the fight on the outside. Vizcaya makes the first takedown attempt. He doesn’t finish, but he’s able to push his opponent against the fence. Van Buren counters with some elbows reminiscent of Travis Browne and he gets similar result. Vizcaya is out cold, and Van Buren wins via TKO.

Frankie calls this the most closely matched fight of the day and it shows. Anundson succeeds on his takedowns in the first round, but the momentum starts to shift in the second. Anderson dials in his range and starts connecting with his punches. Anundson starts to fade and Anderson’s superior cardio gives him the unanimous decision win.

Despite being the smaller fighter, Lima’s fast hands and combo work lead him the unanimous decision win.

A veteran of the most recent season of TUF Nations, Taleb fights out of the renowned Tristar gym. King is a former college football player who stumbled in an MMA career after being “tricked” by an old coach. These two fighters put on the fight of the night. There’s a lot of back and forth and both withstand some heavy shots without slowing down. By the time they reach the third round, King looks like he’s ready to fall over. Nordine puts him on his back and starts to attack. King is able to lock up an unorthodox kneebar and take top position back. From that point on, it’s all Mike King and he takes the decision win.

Frankie Edgar wins the coin toss and elects to have the first pick. He starts with the light heavyweights and chooses Corey Anderson. They proceed until all 16 guys are gone and the teams look like this:

We close out with a preview of this season. Will the coach’s amicable relationship sour? Do the judges ruin someone’s chances at a UFC contract? Why is there a naked guy on the coach? Find out this and more next week on The Ultimate Fighter!