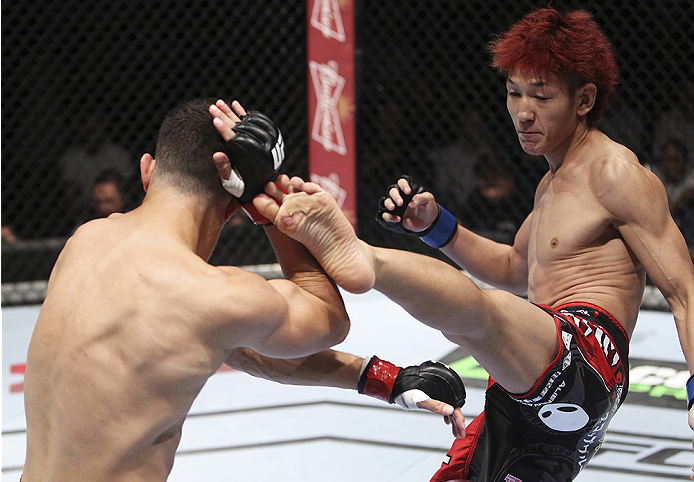 Despite the next level talent he’s displayed over five years as a pro mixed martial artist, Ulka Sasaki is not done learning, with a valuable lesson being placed on his doorstep last December, as he lost for the first time since 2011 against Leandro Issa.

“I was just immature,” he said of the second-round submission defeat. “Also, I feel I made a mistake and took my opponent lightly.”

Not many fighters would admit that, a credit to Sasaki as a sportsman, and even when asked if fighting outside of Asia for the first time was a factor in the loss, the Shizuoka native says without hesitation that traveling Brazil had nothing to do with what happened on fight night.

“Nothing in particular affected me,” he said. “I wasn't jet lagged, and I was in a good condition for that fight.”

So what now? Where is the 25-year-old Sasaki at after seeing an 11-0-1 run come to an end six months ago? Back in action and ready to start a new winning streak this Saturday against France’s Taylor Lapilus. It’s another road game for the Japanese bantamweight, though he’s clearly not bothered by this development, saying of fighting in Berlin, “I like Europe and I think Berlin is a cool city; I really like the kebab here.”

So it’s clear that Sasaki’s confidence hasn’t dipped at all, but this is a pivotal fight in his career, and not just because every win is important in the UFC. It’s pivotal because on paper, the 9-1 Lapilus should lose to the 18-2-2 Sasaki. It’s a similar situation to Sasaki’s bout against Issa, but this time he is most certainly taking his foe seriously.

“He’s a good fighter,” Sasaki said of Lapilus. “His punches extend well, so I have to be careful about that. Striking is his favorite skill, so I don't want to get into that rhythm. I want to make sure he won't feel good during the fight this weekend.”

Sasaki does make it a point to say that Lapilus “is probably is a very nice person,” another nod to his sportsmanship, and maybe such a nice guy wasn’t a good fit for the job he originally wanted as a pro wrestler. It’s not something he ever thinks about.

“Not now,” he said “I do like Kazuchika Okada (NJPW champion) though.”

Sasaki has his own championship dreams to chase after, and he’s doing it in one of the UFC’s most talent-rich divisions.

“Dominick Cruz and TJ Dillashaw are the fighters I really admire in the bantamweight division,” he said. “I like their movement. There are a lot of good fighters in the bantamweight division, but it’s not like bantam is far better than other divisions though. For example, I think featherweight is deep in talent, with a very strong champion like Jose Aldo on the top.”

Could that be a hint of an eventual move to 145 pounds? Sasaki did compete at 143 pounds in Shooto, so it’s not out of the realm of possibility, but for now, he’ll be sticking around at bantamweight, and while he’s impressed already, he doesn’t believe he’s in his prime yet.

“Not yet,” Sasaki said. “I am planning on peaking more than a few years down the road. I am constantly evolving every day. I feel stronger than yesterday and I will be stronger tomorrow, so right now I am at my peak, in that sense.”