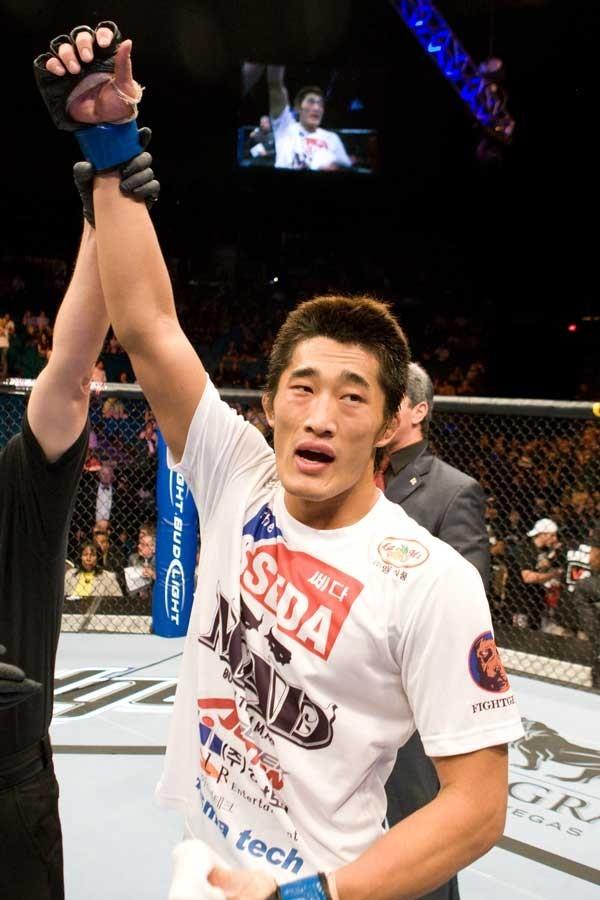 The UFC will return to China for the first time in over a year this Saturday for the upcoming UFC Fight Night: Kim vs. Hathaway event (available only on UFC Fight Pass), which also features the welterweight final of the first ever season of The Ultimate Fighter China.

Welterweight contenders Kim Dong Hyun and John Hathaway will lead the nine bout card in a battle of fighters both trying to eke into the top ten with a win.  Also on the card are heavyweight bangers Matt Mitrione and Shawn Jordan, who both look to escape bad memories from recent losses.

In today's fantasy preview we are going to focus on the main card, including the main event as well as the TUF China final pitting Wang Sai against Zhang Lipeng.

It's kind of ridiculous the murderers’ row of fighters that Kim Dong Hyun has faced in his UFC career, and he still has managed to only lose two fights (the defeat to Demian Maia came after Kim suffered a rib injury).  Kim has faced the best of the best, but currently lurks outside of the top ten with a No. 11 ranking overall, but this could be the fight where he gets to crack the list.

Kim is a suffocating grappler, and when he gets an opponent down, it's next to impossible for them to get up again.  His takedown accuracy is just a shade under 49 percent, and while that doesn't sound ultra impressive, Kim's tenacious nature of shooting for nearly four takedowns per fight is a big reason why his averages may suffer.  If Kim wants to get a fight to the ground, he stays at it constantly until he hits the mat.

John Hathaway remains one of the top prospects in the division, but that label may soon have to fall off given the fact that he's now 26 years old and has been fighting in the UFC for the better part of five years.  Hathaway's gifts are indisputable, but what has killed him time after time are injuries that continue to mount, putting him out of action for long stretches of time.  For this fight, Hathaway has been out for almost 18 months since his last action inside the Octagon.

It's a big reason why Kim is a huge favorite in this fight and why he should be favored to win. The Korean is a massive welterweight just like Hathaway, but his development has continued while the British-born fighter has been stunted by long stretches of time off and injury rehabilitation.  Kim showed in his last fight against Erick Silva that he's also managed to find knockout power in his punches, and much like his bout versus Sean Pierson, his boxing has developed since he first came to the UFC.

Expect Kim to frustrate Hathaway with takedowns throughout the course of the first few rounds while peppering him just enough on the feet to make the British fighter keep guessing where this fight will end up.  Ultimately, it should end with Kim's hand raised in victory with a unanimous decision win over Hathaway.

The first ever TUF China final will take place on the upcoming UFC Fight Night card with Wang Sai meeting Zhang Lipeng in a welterweight battle.  Sai is an interesting addition to the UFC because his main trainer is none other than former Ultimate Fighter season one competitor Mike Swick, who relocated overseas to begin training fighters and open an American Kickboxing Academy affiliate school.

Sai is going to be a fun prospect to watch as he develops under Swick's tutelage because his main strength is his Muay Thai striking, but, as he showcased on the season of the reality show, he's also got a rapidly evolving submission game as well. Sai is very well-rounded, and during his career he's shown that with four knockouts and three submissions to account for his seven wins.  His opponent, Zhang Lipeng, is more experienced with 15 professional fights, but he's shown a tendency to really prefer the ground game if that's where he can take the fight.

Lipeng has a slick triangle choke that appears to be his favorite submission, but if this fight hits the ground, he's likely to be the one that will be diving for the takedown.

Sai has shown patience in the right moments of his fights as well as aggressiveness when there's an opening at the perfect moment.  Sai knows how to execute a game plan, and he has to be considered the favorite in this fight to win by knockout or TKO so long as he can keep Lipeng from dragging this to the ground repeatedly, which is his best shot to win.

Two former football players turned mixed martial artists will face off in a heavyweight tilt, with Matt Mitrione facing Shawn Jordan as the Americans travel to China for a bout with knockout written all over it.

Mitrione is a heavy-handed striker who has continued to develop as a fighter since first coming to the UFC by way of The Ultimate Fighter season 10.  Meanwhile, Jordan is a student of master strategist Greg Jackson, with nasty power in both hands and a bull-like mentality in the cage.

It's Jordan's tendencies to bully opponents that could backfire against Mitrione, however, because the former NFL pro has some of the fastest hands and feet in the entire division.  It wasn't long ago that Mitrione was being looked at as one of the next great prospects in the heavyweight division, and while a few losses have certainly slowed down that conversation, it doesn't mean he still can't turn into a top ten-level contender again.

Mitrione has equal power to Jordan when standing, but his head movement and footwork are on another level.  His ability to avoid damage is paramount in this fight.  He can't get into exchanges with Jordan and just stand still, trading punches to see who falls down first.  That's a game of Russian roulette, but it's a game Jordan plays very well.  If Mitrione can stay fast on his feet and keep Jordan guessing for the first few minutes of the fight, once the former LSU player starts chasing, that's when he can seize the moment.

If Mitrione gets his timing down and Jordan begins bull rushing for his attacks, that's when the end will happen.  Mitrione has deceptive power in his hands and it may only take one punch to seal the deal for the Indiana native to get the knockout win in China.  He may even stand to benefit from a Performance of the Night bonus when it's all said and done.

It was only a few fights ago that Hatsu Hioki was offered a title shot and turned it down because he felt he wasn't ready for a fight against champion Jose Aldo at the time.  Now Hioki stands on the precipice of disaster after three losses in a row following a promising start to his UFC career. In China, he'll face veteran competitor Ivan Menjivar in a pivotal matchup for both fighters.

The hard part about Hioki's run of late is that his losses have all been close fights where he just couldn't pull the trigger to get ahead of his opponents enough to get the judges' nod.  Hioki is best when he's on the ground, but facing wrestlers like Darren Elkins and Ricardo Lamas hasn't helped him stay there in his last few fights.  Menjivar is fantastic in the scramble so he's not going to be an easy foe to keep down either, but Hioki will have a huge size advantage in this fight so he needs to use it.

Look for Hioki to stifle the early attacks from Menjivar, who will be the quicker fighter, and then counter with takedowns and clinch control against the cage.  Hioki's best hope is to suffocate Menjivar and give him no space to operate.  By the end of the second round, Menjivar should feel like he's treading ground that's made of quicksand, and when the fight is over, Hioki's hand should be raised.  It may not turn out to be the fight of the century, but Hioki has the weapons to be one of the best in the world again; he just needs to show it more, and it starts with Ivan Menjivar.