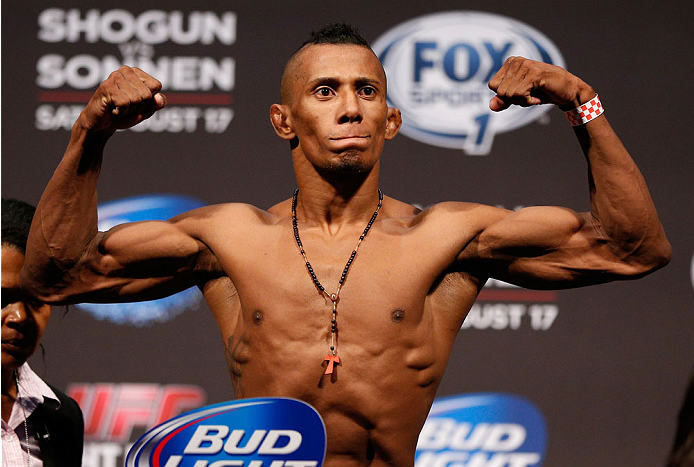 The UFC's return to Brazil usually means that the card will be stacked with a huge slate of local talent and the upcoming UFC Fight Night card from Jaragua do Sul is no exception.

From top to bottom, this Saturday’s event is loaded with Brazilian fighters all hoping to make their home country crowd proud, and given the kind of winning record they possess over foreign invaders, the odds are certainly on their side.

In today's fantasy preview, we will break down a few of the key fights on the preliminary card, which is highlighted by a few notable names and talented young fighters hoping to make an impact and maybe take home some bonus money by the end of the night.

The featured bout on the undercard is a battle of former Ultimate Fighter teammates, as Joe Proctor takes on Cristiano Marcello.  Both fighters are students of the ground game, with Marcello being a lifetime jiu-jitsu practitioner who used to teach the likes of Wanderlei Silva and Mauricio “Shogun” Rua while they were teammates in Brazil.  Proctor is a student of UFC stalwart Joe Lauzon, and has the ability to bring a similarly exciting style to the cage.

Marcello is in a tough spot going into this fight, having lost two out of his last three fights with his one win a controversial victory over Reza Madadi.  Marcello is a high-level ground fighter, but lately he's struggled to get opponents to the mat.  He's got only a 14.29 percent takedown accuracy while only blocking 20 percent of his opponent's attempts to put him on his back.  It's not likely Proctor - despite his own ground game being pretty good - will want to take this one to the ground, and he will prefer to keep this standing.

Proctor isn't setting the world on fire with his striking either, but in this case, youth beats experience. Proctor knocked out fellow housemate Jeremy Larsen in his UFC debut, and he's got the ability to finish a fight that way again if Marcello isn't careful.  Proctor also has the added edge of training with the Brazilian during their time on the reality show while under coach Urijah Faber.  Proctor will look to shut down the takedown and then start to stalk forward looking for the knockout shot.  He can't overextend and risk being submitted on the mat, but Proctor's power should keep Marcello at bay long enough to find the right opening to put him down and out sometime before the final horn sounds.

One of the prospects to keep an eye on during this card is Brazilian fighter Ivan Jorge, who holds a 25-3 record overall but just recently got into the UFC, where he picked up a win in his debut.  His opponent, Rodrigo Damm, doesn't have the same kind of record (11-6 overall), but he has big fight experience, and even though that accounts for a great number of his losses, he's faced a tougher slate of competition.

Still, Jorge is an interesting fighter to watch as he tries to employ his jiu-jitsu game on the lightweight division in the UFC.  Jorge is also an active striker, where he lands 4.6 significant strikes per minute and lands with great accuracy, so he's no slouch on his feet either.  Damm is a very durable fighter, so he won't go away easy, but Jorge seems to have the makeup to be a serviceable fighter at 155 pounds in the UFC.

Jorge should be able to throw Damm off his game with the takedown attempts, and whether he lands them or not, getting it in his head that it's coming can sometimes be just as dangerous of a weapon.  Once Jorge gets Damm guessing, he can open up on his striking and pull away round by round until the judges have no choice but to hand him his second straight victory in the Octagon.

An early choice for Knockout of the Night could come in this battle of Brazilians, as Iuri Alcantara takes on Wilson Reis.

Alcantara is a massive bantamweight, who has fought as high as 170 pounds in the past, and he could be a real contender at 135 pounds given the time to develop.  His lone loss in the division came last year to Urijah Faber, in a fight where he gave “The California Kid” everything he could handle.  He was also the only fighter in 2013 to take Faber to a decision.  Alcantara is a nasty, aggressive striker, who blitzes opponents with attacks from all angles and usually he doesn't stop until the referee is dragging him off to stop the bout.  While still fighting at lightweight, Alcantara knocked out former featherweight contender Ricardo Lamas, and he's got the chops to put another opponent away here as well.

Wilson Reis surprised a lot of fans with his performance in his debut in the UFC with a win over Ivan Menjivar after taking the fight on short notice.  Reis is a great submission fighter with a wealth of experience against top competitors on his resume. The problem Reis has had in his last two losses is facing explosive strikers, who come after him with little regard for his takedown prowess.  That's precisely what he'll face from Alcantara.

Alcantara is mean with his standup attack, and if Reis shows any kind of hesitation, he'll pounce on him and keep punching until the fight is over.  Alcantara is the real deal, and given enough time he could be a real contender in the division.  This is another chance for him to prove it.

If our previous fight discussed was in the running for Knockout of the Night, this might be the best candidate for Fight of the Night.  Felipe Arantes is an exciting fighter who loves an opponent that brings the battle to him, and he will certainly get that with this upcoming bout against Maximo Blanco.

Blanco has been uneven in his performances since coming to the UFC, and his last fight ended in controversy when he landed an illegal knee to his opponent Akira Corassani, but he showed flashes from previous performances that show hope for what he can do this time around.  While he was fighting in Japan, Blanco was one of the most feared fighters competing in MMA.  He was a lightning fast striker with some of the most powerful attacks in the sport.

Arantes is a smart enough to know to avoid Blanco's onslaught, but his best bet in this one might be to get the fight to the ground.  It's there where he will have an advantage, but as long as this one stays standing, it's going to be exciting.  Blanco's power and berserker-style attacks can make for some crazy exchanges, and if Arantes can weather an early storm, he could take over late and make this a very interesting bout from start to finish.

The key is Blanco using controlled aggression against Arantes and not going crazy if he sees an opening. Blanco needs to hurt Arantes and then swoop in for the finish, but not unload so many shots that he gets exhausted in a short period of time.  If this fight ends, Blanco is probably going to be the one to finish it.  If it goes to a decision, Arantes holds the stronger hand, but those exchanges with Blanco will be like walking a minefield over the course of 15 minutes.