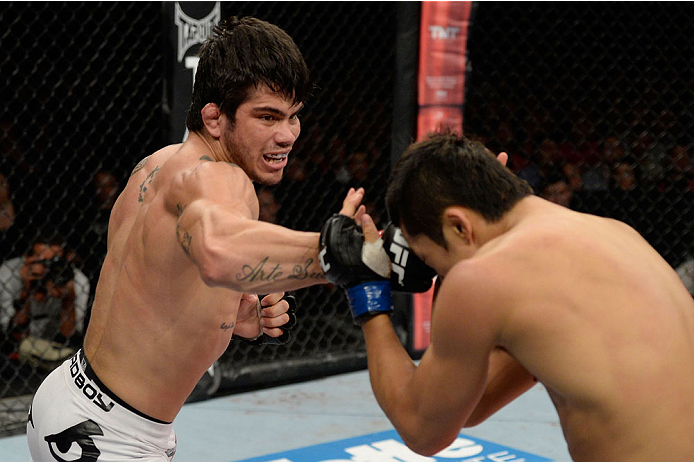 The middleweight division will enter the spotlight when the UFC returns to Jaragua do Sul, Brazil this week, as two fights from the weight class headline the show, with Lyoto Machida taking on Gegard Mousasi in the main event, while former Strikeforce champion Ronaldo “Jacare” Souza faces top ten fighter Francis Carmont.

Both fights could potentially have an impact on the UFC middleweight title picture, and with the right kind of win, any of these four fighters could be staring down the barrel of a championship fight.

In addition to the two featured middleweight bouts, several other high-profile matchups dot the rest of the main card, including exciting striker Erick Silva taking on newcomer Takenori Sato, as well as Charles Oliveira facing off against Ultimate Fighter veteran Andy Ogle.

In today's fantasy preview, we are going to break down the main card to see who has the advantage going into Saturday night's card, and which fighters could be primed for an upset.

Former light heavyweight champion Lyoto Machida made quite an impact in his debut at 185 pounds when he flattened Mark Munoz in the first round of their fight in October of last year, and with that lone win he immediately got in the discussion for a title shot in his new division.  Hoping to make a similar debut in the UFC at 185 pounds is former Strikeforce champion Gegard Mousasi, who actually returns to middleweight after competing at 205 pounds for the last few years.

This five round main event matchup pits two of the best strikers in the UFC against one another, although they are very different in the way they approach the standup game.  Machida is a well-known karate fighter who uses a non-traditional stance when coming at opponents, as well as a ton of in and out footwork to remain elusive and avoid taking much damage in his fights.  On the other side, Mousasi is a very accurate striker that steps forward and lands powerful shots on the inside and also unleashes some vicious power kicks that do maximum damage.

What this fight boils down to is who can impose their will on the other standing, and the safe bet falls in Machida's corner.

Machida has the third highest distance striking accuracy in UFC history and he combines that with 56 percent overall striking accuracy, which is good enough for eighth on the all-time list.  His speed and ability to frustrate opponents almost always opens up opportunities for Machida, who also has the fourth most knockdowns in UFC history as well.  The toughest part about facing a fighter like Machida is that it's nearly impossible to draw him out of his game.  He rarely gets sucked into an opponent's strategy, and while that has caused him to be showered with a few jeers over the years, Machida just doesn't deviate from what's going to get him the win.

Mousasi has a power advantage in this fight and also exudes a great finishing rate (85.3 percent of his wins have been finishes) while he also only absorbs 1.2 significant strikes per minute, which is more than 50 percent better than the UFC average. Still, for all the striking acumen Mousasi possesses, it's the speed game where Machida bests him.

As long as Machida stays quick on his feet and doesn't get into any big exchanges with Mousasi he should get a unanimous decision win.  Mousasi has never been knocked out and Machida probably won't be the first one to do it here either.  If Mousasi can find a way to trap Machida against the cage or get into an exchange of punches, he's got a shot of winning by knockout, but as the fight wears on, the former UFC champion will start to pull away on the judges’ scorecards.

Ronald “Jacare” Souza may not be the main event fighter on Saturday night's card, but he may end up being the most talked about competitor once the show is over if he can get past a suffocating and undefeated UFC fighter named Francis Carmont.

Since coming to the UFC, Jacare has been blistering in his performances - most notably dusting off former middleweight title contender Yushin Okami by knockout in his last fight.  Jacare is a dangerous combination of world championship level jiu-jitsu skills, along with a powerful striking game with dynamite in both hands.  Carmont is no walkover though, and with a perfect 6-0 record in the UFC and the best takedown defense in middleweight history, he's not going to fade quietly into that good night.

Carmont can be a stifling fighter to face and particularly frustrating if an opponent allows him to impose his will.  He took down Costa Philippou down five times in his last fight, and by the third round it appeared as if he broke the New York fighter's spirit.  It's not always the prettiest style, but it gets the job done.

His strategy has to be something different to face Jacare, however, because approaching the ground game with him is like jumping into a pool of sharks wearing a chum jacket.  Jacare may have the best Brazilian jiu-jitsu game in MMA today, so taking him to the ground is something he would surely welcome.  On the feet, Carmont only lands strikes at 2.15 per minute, which is half the output that Jacare produces.  Add to that an 80 percent striking defense for Jacare, and no matter where this fight goes, he should have the advantage.

Watch for Carmont's strategy in the opening round - if he's not diving for takedowns then he probably believes he can win this one standing. But given Jacare's rapidly improving striking, then he just has to play it smart and eventually he'll hurt the French fighter and take over as the rounds move forward.  Jacare winning by decision is the most likely scenario, but don't doubt his finishing power, especially if this one hits the mat.

Statistically, this is the biggest mismatch on paper going into UFC Fight Night in Brazil, and the oddsmakers are probably right on the money, but don't count Takenori Sato out just yet.

As a former welterweight champion from Pancrase, Sato has a slick submission game that he used while idolizing legendary PRIDE fighter Kazushi Sakuraba.  Sato has a varied attack of submissions from the ground, including kimuras, key locks and armbars, so if this fight hits the ground he's got a shot of pulling off a massive upset.  There's even a 400 point bonus if he wins.

That said, Silva is the favorite for a reason.  He's a powerful young striker who also possesses a fundamentally sound ground game.  Silva trains out of Team Nogueira and the X-Gym, where fighters like Jacare Souza also work from, and working alongside legends can only rub off on a youthful fighter.  Silva is an extremely fast starter, and that bodes well for him in this one, because Sato, making his UFC debut, could have a few butterflies in his stomach.  When you couple that with the fact that Sato is taking this fight on short notice, and Silva should have a gift-wrapped early knockout victory on his hands here.

If Sato can survive an early onslaught though and drag this one to the mat, he could pull off the shocker of the evening, although the odds are not in his favor when it comes to that happening.

If you're looking for a fight with similar odds but a better chance of being an upset, it's this one pitting Charles Oliveira against Andy Ogle.

On the right night, Oliveira is one of the most talented fighters in the UFC.  He's a hybrid fighter with long range, creative striking and a jiu-jitsu game that can be fast and devastating. At moments, Oliveira flashes the kind of performance that makes you think he could be champion one day, but then there are other fights where he falls flat and expectations plummet into the basement.

Ogle, on the other hand, isn't as talented as Oliveira, but he's a tough fighter out of England who has no problem throwing down during a fight.  Ogle has a great ability to keep things close in his fights, and if he can pull Oliveira into the later rounds, where the cut to 145 pounds may come back to zap him, it could fall into the British fighter's favor.  Ogle won't blow you away with his knockout power or ground skill, but he's tough and that's a quality that just can't be taught.

If this fight gets finished, look for Oliveira to do the finishing.  He's feasted on every non-top ten fighter he's faced and guess what - Ogle isn't in the top ten.  On paper, Oliveira should win this by submission given his track record (his four wins in the UFC are all by submission), but he has to put Ogle away early and not let the Brit hang around late.  The longer this fight goes, the better chance Ogle has of stealing the second and third rounds and getting an upset victory.