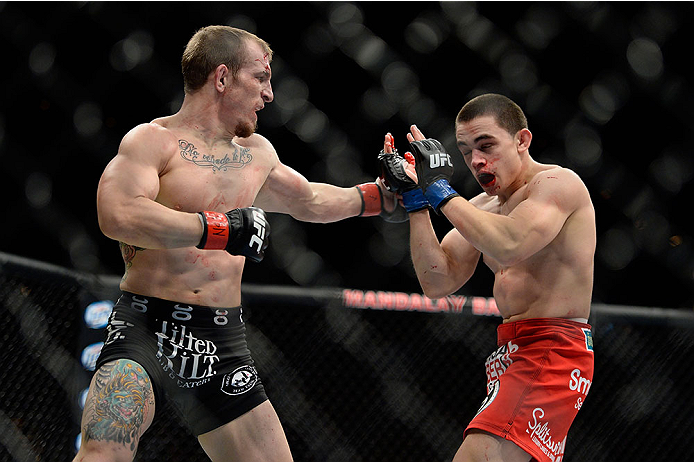 With a lot of home country pride on the line, there's plenty up for grabs on this preliminary card.  In today's fantasy preview, we'll look at some of those key matchups to find out who will make the Irish fans stand and cheer and who might play spoiler for some of the hometown heroes.

With six fights on the prelims and only four on the main card, this undercard may also decide who comes out on top in the UFC Pick Em game, so these are crucial fights to determine who wins and who loses when the final scores are tallied.

Dempsey is primarily a wrestler, where he was an All-American at the Division II level in college.  In his MMA career, Dempsey has transitioned that skill set into a successful run as a professional, winning 10 out of his first 11 bouts at the regional level.  While he's certainly got some potential, he's never fought in the UFC before and despite having a reach advantage over Latifi, Dempsey is normally a middleweight who is going up 20 pounds to face the Swedish fighter in this bout.

What Latifi lacks in height while fighting at 205 pounds, he more than makes up for it with power.  His 5'8" frame is like a brick wall with arms and he's been the shorter fighter in virtually all of his fights, so he knows how to get inside on an opponent and hurt them without taking damage from his lacking reach.  In the clinch and with his dirty boxing, Latifi is most effective, and chances are he won't have to wait long to engage with Dempsey, given his wrestling pedigree, as they will likely lock horns within seconds of the opening bell.

Latifi is no slouch when it comes to his own wrestling game, and with his shorter size, he's got less to grab on to when Dempsey decides to shoot in and look for the takedown.  Once Latifii stuffs a couple of attempts, he'll either give in to the wrestler and look for a submission (such as the guillotine choke that won his last fight) or sprawl out and unload with punches until Dempsey wilts from the pressure.  Either way, Latifi should win and finish this fight inside the first two rounds.

It's Ireland vs. the U.K. in this rematch between Neil Seery and Phil Harris.  The two fighters first met in 2010, with Harris taking a unanimous decision, but since that time they've gone in dramatically different directions.  Harris made it to the UFC, but found very little success outside of a win over Ulysses Gomez in his second fight, while Seery has gone 6-2 since that fight, with his last loss coming by way of decision to Brad Pickett in his UFC debut, which he took on very short notice.

Seery showed real promise in his debut, going toe-to-toe with one of the most powerful punchers in the lighter weight divisions and he's no slouch on his feet either.  Seery landed just over three strikes per minute in that fight while showcasing solid defense as well.  Now statistically, Harris has even better defense standing, but it will be interesting to see how he does against a volume striker like Seery in this rematch.

Harris is a solid ground fighter with better than average hands, but he's not shown up much in his UFC performances.  He got blitzed by John Lineker two fights ago and then fell by submission to Louis Gaudinot before having that loss overturned when his opponent tested positive for the use of a banned substance.  It's possible Harris was just losing to superior fighters and this bout against an opponent he's already beaten will instill some confidence, but he's fighting an uphill battle.

Seery knows what it's like to step into the Octagon now and put on a show for the fans, and in front of his home country, chances are he'll be feeding off that energy.  He's got fast hands, quick feet and an unbelievable chin.  Seery is going to test Harris early to see if he's really ready to be back in the UFC or if this was a rematch he's been dreading since their first fight.  Look for Seery to pop Harris early and often from the outside, move away from Harris' takedowns, and outpoint the Brit en route to a unanimous decision win.

The toughest fight to pick from the preliminary card is probably this showdown between two former members of Team Penn on The Ultimate Fighter 19 when Cathal Pendred meets Mike King.

Pendred was an early favorite to win the entire show, but lost a very close decision to Team Edgar fighter and eventual champion Eddie Gordon.  Pendred is a natural welterweight, which is where he'll likely be headed after this fight, so he's going to give up some size to King, who is a monstrous fighter for 185 pounds.  Pendred is the picture of consistency when it comes to his MMA game – he’s a worker on both the feet and on the ground, and has better than average wrestling coming out of Europe, a part of the world usually behind the United States and some other countries when it comes to the art of the takedown.

King is still developing who he will eventually be as a fighter, but a few things we learned about him from the reality show is that he's incredibly tough and durable with a good wrestling base, although he was drawn into a striking battle when he disagreed with his coaches on a game plan for his fight.  King spent this entire camp working in South Carolina alongside welterweight phenom Stephen “Wonderboy” Thompson, so he's been polishing his striking skills once again and that could ultimately cost him in this fight.

Pendred knows King is going to be the bigger fighter so he has to use quickness to avoid his power, while darting in and out with his combinations.  Given King's recent passion for the striking game, Pendred may even steal a few takedowns to frustrate his former teammate as the rounds move forward.  King isn't going to just fade because he loses a round or two to Pendred, so the Irishman has to show due diligence for all 15 minutes or he could let this one slip away.

In the end, Pendred gets the win based on a better skill set and his ability to mix things up as the fight gets into the second and third rounds.  This one could be a war, however, so don't count King out until referee says “stop” and the fight is finished.

Another Irishman making his debut on this card is flyweight prospect Patrick Holohan, who comes from the same gym as Cathal Pendred and the UFC Fight Night headliner, Conor McGregor.  Holohan is a former Ultimate Fighter hopeful, although he lost in his bid to get into the house when he was out wrestled by Josh Hill over the course of two rounds and lost by majority decision.

Holohan may not fare much better in this matchup against Sampo, who is an aggressive wrestler and ground fighter with good defensive skills as well.  Holohan likes to launch submissions at his opponents, but it's going to be hard for him to get much going with Sampo putting him on his back constantly and raining down punches from above.  Sampo is still a very solid prospect for the flyweight division and shouldn't be discounted just because he lost to Zack Makovsky in his last bout.

Sampo is a physically strong fighter for 125 pounds, with mat work that rivals anyone in the division if he lands on top.  Chances are with Holohan's defensive woes in that department, he'll probably spend a lot of time in this fight on the ground defending strikes from Sampo and desperately searching for a stand up or some way to get an arm or leg free for a submission.

It's not likely to happen, however, and Sampo should cruise to a three-round decision win to kick off the card and probably put the Irish fans in a bad mood until one of their countrymen can get on the board with a victory.