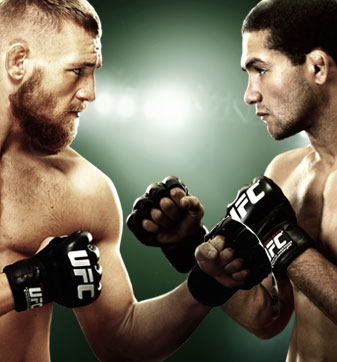 It's been five long years since the UFC last landed on the Emerald Isle of Ireland, but this weekend marks the return of the biggest MMA show to one of the biggest fan bases in the entire world, as home country favorite Conor McGregor headlines his first card inside the Octagon against former Ultimate Fighter winner Diego Brandao.

In the co-main event, grappling prodigy Gunnar Nelson takes on Zak Cummings in a pivotal welterweight matchup between two very tough competitors at 170 pounds, and also on the main card, England's own Brad Pickett will face Ian McCall in a fight that could have title implications on the line for the winner following John Dodson's unfortunate knee injury that put him out of action until 2015.

All told, the UFC Fight Night card in Ireland (which airs on UFC FIGHT PASS) is stacked, but as we break down some of these fights, who has the advantage to come out on top, and how will they get there on Saturday night?  Today’s fantasy preview looks at those very factors as we look ahead to this weekend's card.

Following a year-long layoff after knee surgery, Conor McGregor returns to the Octagon as he looks to continue his warpath toward an eventual shot at the UFC featherweight title when he faces Diego Brandao in the headliner of the UFC Fight Night card.

McGregor is full of bluster and confidence, but don't be fooled by his brash words and over the top personality - this kid is for real.  McGregor possesses some of the slickest boxing in the 145-pound division, landing 4.59 strikes per minute while showcasing 74 percent defense, which is dramatically higher than the UFC average (58 percent).  As a boxer primarily, McGregor is good from the outside or as a counter striker, which will work wonders in this fight against an ultra aggressive fighter like Brandao.

There's no denying the Brazilian is like the Tasmanian Devil when he gets in the cage, usually unloading dynamite as soon as the fight starts.  Brandao isn't reckless with his strikes, as he lands with 45 percent accuracy, but his wild nature generally results in two problems - first, it leaves him open to counter strikes as witnessed in his fight against Dustin Poirier and, second, it doesn't give Brandao the greatest of gas tanks to go for five hard rounds, which he could be forced to do in this fight.

McGregor is a master of getting into his opponent's head and making them see red before ever stepping foot in the Octagon, and the fact is that Brandao has shown to be an emotional fighter in the past.  If he wants any chance of winning this bout he has to be patient and force McGregor to step forward.  Otherwise, his night will be spent with an Irishman's fists in his face over and over again.

Given McGregor's layoff, he may be a bit tentative in the first round, not to mention the over 10,000 fans in attendance in Dublin all rooting for him to win.  Once his nerves settle, McGregor should be able to pick his shots on Brandao coming in, and then pick him apart with power shots as the Brazilian starts to fade.  By third round, McGregor should be on his way to target practice before putting Brandao away with strikes.  McGregor has to be careful early, but once he finds his rhythm, Brandao is in trouble.

If you haven't heard the name Gunnar Nelson yet, you've probably been living under a rock because this young man from Iceland has been all the rage for the last year after finally debuting in the UFC following an undefeated record in MMA and a prolific background in the Brazilian Jiu-Jitsu world.  Nelson is a black belt under famed trainer Renzo Gracie, and his overall fight game has evolved dramatically in the last couple of years to the point where some predict he will have UFC gold around his waist one day.

Nelson is more than just a grappler, however, because his hands have come a long way lately.  He's landing around three significant strikes per minute, but he's on target 61 percent of the time, which is a phenomenal rate. To put that in perspective, Matt Brown has the best striking accuracy in the welterweight division with 59 percent accuracy. Nelson doesn't get put in the same category yet because he only has three UFC fights thus far, but he's well on his way to proving he can stand and trade with the best of them.

Hype and expectations are great, but Nelson has a very tough test ahead of him this weekend facing former Ultimate Fighter Zak Cummings.

Cummings is a sizable underdog, but he thrives in that position.  He just faced another world-class grappler in Yan Cabral and not only won the fight, but virtually controlled every facet of the matchup from striking to the ground game.  Cummings is a massive welterweight who will have a size advantage over almost everyone in the division, and Nelson is no exception.  Cummings has a wrestling background and a toughness that can't be measured by statistics.

The smart pick remains with Nelson, given his pedigree and overall skill set.  He's a world-class submission specialist with 67 percent takedown accuracy, but more important is his striking game, which is deceptive and often overlooked.  Still, if there's an upset brewing on this main card, it comes courtesy of Cummings.  He showed no fear taking on another high-level grappler in his last fight, and if he can be confident in his attacks during this fight, he could give Nelson some major headaches while handing him the first loss of his career.

The flyweight division is looking for a new top contender following an injury that put John Dodson out of the picture for the next year, and the next challenger for the title could come from this fight between Ian McCall and Brad Pickett.

This fight might also be the toughest one on the entire card to choose who comes out on top.

Pickett enters only his second fight at flyweight after spending his entire career with the UFC / WEC as a bantamweight, where he picked up several notable wins, including a victory over current 125-pound king Demetrious Johnson.  Pickett is a heavy-handed boxer with a good ground game as well.  He's finished a ton of his fights by submission, so don't doubt that he can take this fight to the mat and look to put away McCall there just as easily as he can with his hands.  Pickett lands strikes at 3.35 per minute while also averaging 3.11 takedowns per 15 minutes.  If his weight cut goes smoothly, he'll also have a slight size advantage over McCall, although both fought at 135 pounds for much of their careers, so that really shouldn't be an issue.

McCall is the enigma in this fight, but it's not based on his fight skills, which are excellent.  He's as well-rounded as anyone in the flyweight division with a slick wrestling game mixed with an above average kickboxing pedigree as well.  McCall is never going to be an easy out for anyone in the division, but it also depends on which version shows up in Ireland.  As witnessed in his debut fight in the UFC against Demetrious Johnson or in his last fight against Illiarde Santos, McCall is very capable of pulling off a nearly flawless performance against the best of the best in the division.  Then again, McCall has failed to show up for some fights as well, just like in his rematch with Johnson or his fight against Joseph Benavidez. There's no shame in losing to either of those fighters, but McCall didn't perform very well either time and that led to unanimous decision defeats both times.

Pickett knows what's riding on this fight - an impressive showing means he probably gets the next crack at Johnson for the flyweight title.  It's impossible for the British banger to fight safe, so he's going to go out and try to put McCall away from the first second of the opening round until their bout is over.  Pickett's flyweight debut wasn't great, but if he learned how to properly cut the weight to get to 125 pounds, he should be able to outwork McCall on the feet, avoid takedowns, and counter with his signature brand of punishment.  It all leads to a Pickett win when the night is over.

Former Ultimate Fighter winner Norman Parke looked like a very bright prospect coming off the reality show, but in his last couple of performances, the luster has been knocked off this Northern Irish lightweight.  Saturday is his chance to polish his credentials again as he faces returning Japanese fighter Naoyuki Kotani.

Kotani lost in his previous two fights in the UFC in 2007, but a 13-fight win streak earned him a second chance, although it's hard to tell if he'll perform any differently this time around. Kotani is primarily a submission fighter, finishing 25 of his 33 wins on the ground.  He's got a variety of finishes in his bag of tricks, including a nasty heel hook, which does a lot of damage in a hurry.  Kotani's weakness, however, has been his level of competition, as he's beaten a lot of no names in the last few years, which means his experiences since leaving the UFC haven't prepared him all that well for a return to the Octagon.

Parke is a dynamic stand-up fighter who lands nearly four significant strikes per minute.  In this fight he needs to up that rate and really put the pressure on Kotani early to see if he can put away the Japanese fighter before he ever has a chance to truly get his feet wet again in the Octagon.  Parke has the ability to put combinations together, and given Kotani's brief flashes of striking in the past, this is a chance for the former Ultimate Fighter winner to get back on track with an impressive finish.  If he swings for the fences early, Parke could get this one done before the first round ends.