A look back at Saturday's UFC Fight Night: Brown vs. Silva card... 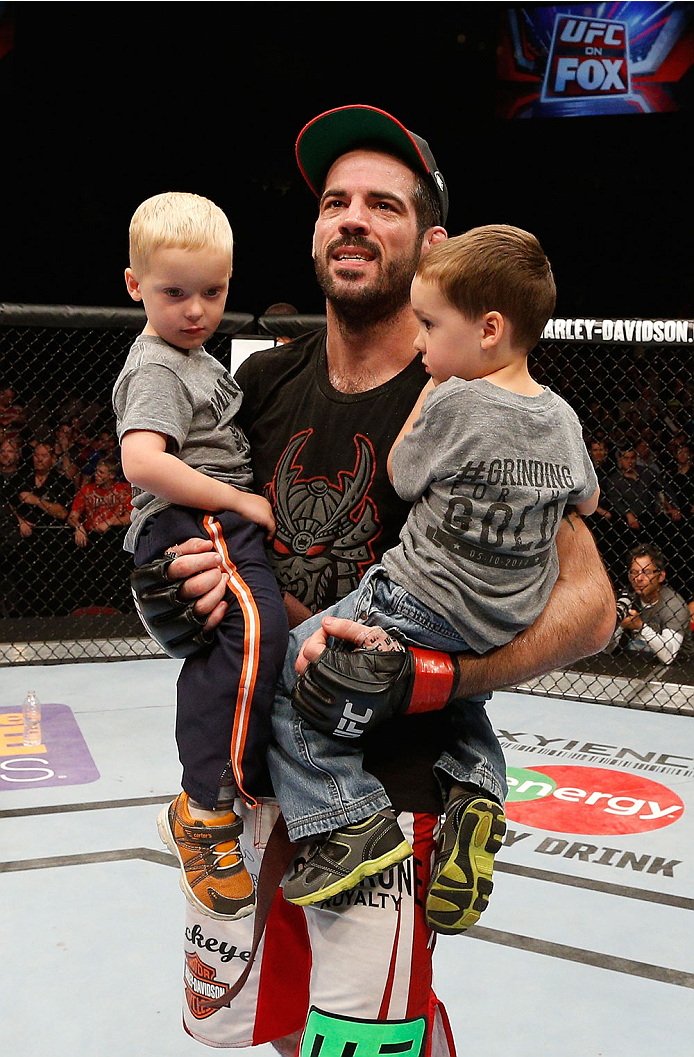 IMMORTAL
UFC welterweight champion Johny Hendricks told me on a number of occasions before picking up his gold belt that after taking the title, he was going to relish being the one every other 170-pound fighter was going to be chasing. After watching Matt Brown’s stirring win over Erick Silva Saturday night in Cincinnati, I wonder if “Bigg Rigg” still feels the same way. Simply put, Brown fought with an intensity and purpose you don’t see very often, and if you do, it’s usually in spurts. Not “The Immortal.” From the time he left the locker room, Brown’s focus was unwavering, and even when he was rocked with body shots and had Silva on his back looking to submit him, quitting was not in the Ohio native’s vocabulary. Not in Ohio, not in front of his mother, wife, and twin sons. And in a sport with rules and regulations, this was a fight. As I wrote in my event report, practically every fighter says he goes into the Octagon to finish his opponent; not like Matt Brown does. Every technique he threw at Silva was designed to end matters. There was little wasted motion, but still, as round three began, I wondered how he was going to keep his furious pace going for another 15 minutes. He didn’t have to answer that question, but after his third-round TKO victory, the next query is, does he deserve the next shot at Hendricks’ belt. Seven consecutive wins, six by knockout, should answer that affirmatively. Some might question some of those wins, saying that opponents like Chris Cope and Luis Ramos aren’t even in the UFC anymore, but if you’re fighting someone who doesn’t belong in there with you, you do what Brown did with them – you get them out of there. The way I see it, Brown’s comeback story is one of the best out there, he’s paid his dues, and he’s getting better with each fight. He’s earned his shot, and let the winner of June’s Tyron Woodley vs. Rory MacDonald bout get the winner of Hendricks vs. Brown. So does the Ohioan have a shot against Hendricks? I think the Matt Brown that showed up to the U.S. Bank Arena Saturday night can beat anyone.

RESPECT FOR ERICK SILVA
It’s easy to look at the girls swooning at Erick Silva, see his quick wins, and assume that he’s a frontrunner, a guy that doesn’t have that extra gear for when the going gets tough. Saturday night’s loss to Matt Brown should obliterate any such assumptions, but they shouldn’t have been there in the first place. As I’ve written endless times, there are no cowards in combat sports. To walk up those four steps and bare yourself to the world in the scariest one-on-one environment possible takes more intestinal fortitude than most can imagine. For those shouting derisively from the stands, the ones whose biggest fight is with the pillow in the morning, they’ll never get it. But guys like Silva are cut from a different cloth than 99 percent of the population. In a world where the instinct would be to run away from a rampaging marauder like Matt Brown, Silva took everything his opponent threw at him for nearly 15 minutes, and for each second until the end, he never stopped trying to turn things around. For every negative comment a fighter receives, there should be ten more praising him or her. This may look easy on television, but it’s not. So the next time you see someone like Silva putting everything on the line to win a prizefight, that’s worthy of your respect, and act accordingly. Thankfully, after some scary moments, Silva got a clean bill of health at the hospital and will soon be back in his native Brazil to see his friends, family, and especially his son. He’s banged up and bruised, and he probably won’t want to show his son this fight, not yet at least, but one day, he will show him his three rounds with Matt Brown and be able to say “this is who I am.” It’s not always about wins and losses; it’s about facing the worst possible scenario and still staying in the fight. That’s a metaphor for life right there.

COSTAS IS BACK
A buddy of mine texted me before the co-main event between Costas Philippou and Lorenz Larkin and told me he was hoping for a comeback from the New Yorker after two consecutive losses. I wrote back that I like both guys so I’m hoping for a draw. And I meant it. Both middleweights are good guys outside the Octagon, and when you see two folks you like fighting, you want the outcome to be positive all around. But that’s not usually how it goes, and that was the case on Saturday, as Philippou resurrected his hopes for a 185-pound title shot with a first-round knockout win and Larkin is forced back to the drawing board after losses in three of his last four. That’s the best and the worst part of the fight game. A good guy wins and a good guy loses. It’s part of the job.

DETROITTTTT SUPERSTAR
As his native Detroit attempts to make its comeback, one of its favorite sons is doing a pretty good job representing the Motor City, as Daron Cruickshank put another clip on his growing highlight reel with a first-round knockout of Erik Koch. A compelling fighter who uses his kicks not just as finishers, but as jabs and range-finders, Cruickshank, like Brown, is another fighter who is getting better with each outing, and after taking out a legitimate prospect in Koch, the “Detroit Superstar” is certainly ready for a top 15 opponent in his next fight. How about Edson Barboza? Now that would be a fun one to watch.

HULK SMASH
This may be blasphemy to some, but Soa Palelei may have the most devastating ground and pound attack seen around these parts since Mark Coleman invented the art form back in his heyday. While guys like Coleman used the top position to rain down fight-ending blows, in recent years we’ve seen the technique relegated to a point-scoring thing. Not with Palelei. If he gets on top of you, he’s not throwing a few shots to score points while maintaining a dominant position; he’s looking to knock you out, and after doing just that in three straight in the UFC against Nikita Krylov, Pat Barry, and Ruan Potts, he’s another fighter who should get a top 15 foe sooner rather than later. As for his post-fight singing, well, that may be an acquired taste, but he gets an A for effort.

CARIASO CLOSES IN
With Demetrious Johnson terrorizing the flyweight division he rules, the race to establish legitimate title challengers is a frantic one. That’s bad news for the guys being tossed aside by “Mighty Mouse,” but good news for guys like Chris Cariaso, whose current three-fight winning streak should propel him even closer to a world title fight. And perhaps with one more win over a top contender, he may very well be in that fight by the end of the year.

THIS AND THAT
When Rafael Natal nailed Ed Herman with a few leg kicks in the first round and Herman flexed his knee and looked to be injured, it looked like “Short Fuse” was on the way to suffering the same injury that ended his 2009 bout with Aaron Simpson and kept him out for nearly two years. But Herman recovered and fought a solid, workmanlike fight the rest of the way against Natal, picking up a much needed win. It was a reminder that veterans like Herman can never be counted out…Speaking of an impressive workmanlike performance, Nik Lentz gave one as well in taking a decision win over Manvel Gamburyan…Another flyweight worth watching is Kyoji Horiguchi, who looked good in his 125-pound debut against ultra-tough Darrell Montague…Albert Tumenov and Justin Salas started off the card right with knockout wins over Anthony Lapsley and Ben Wall, respectively, getting the enthusiastic crowd into the fights immediately…Big upset wins for Zak Cummings and Johnny Eduardo, with Cummings handing Yan Cabral his first pro loss, and Eduardo coming back from a long layoff to knock out former world title challenger Eddie Wineland. And while the defeats are tough for Cabral and Wineland to deal with, it’s another reminder why they fight the fights. The odds mean nothing when the Octagon door closes…