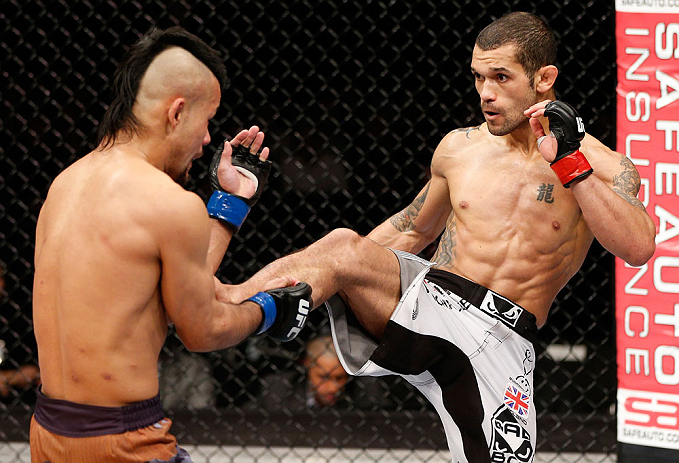 When the UFC returns to Germany this Saturday on UFC FIGHT PASS, the prelims will feature a slew of local European fighters looking to take advantage of competing close to home while also attempting to make a name for themselves for a future slot on the main card.

Top German prospect Nick Hein will make his long-awaited UFC debut against former Ultimate Fighter hopeful Drew Dober, while a pair of featherweight bangers will look to mash each other with punches until one of them falls over as Andy Ogle takes on Maximo Blanco.

All told there are six fights on this Saturday's prelim card, and in today's fantasy preview we'll break down a few of the key matchups to get to know some of the fighters you may not have heard about yet and see who has the upper hand on coming away victorious in Berlin.

American Drew Dober will make the long trip from Nebraska to Germany for his fight against Judo black belt Nick Hein in the featured bout on the preliminary card.  Now why is this bout headlining things when there are a few UFC veterans dotting the undercard?

It would appear to be the considerable hype around Hein as a prospect coming out of Germany.  Hein previously fought at welterweight, but standing just 5'8" tall, a move down to 155 pounds was probably his best move given the size of some of the monsters competing at 170 pounds these days.

Hein is a real threat with his Judo, and unlike some practitioners that have gotten away from that craft as they started evolving with other skills, the German-born fighter knows what got him to the dance and he almost always uses it.  Hein has slick trips and throws, so expect him to rush in and look for the clinch on the first opening that Dober gives him.  Once the fight hits the mat, Hein is hard to pry loose and he's got fast hands and punches to do maximum damage.

Dober has worked tirelessly over the last couple of years to improve his wrestling defense, which was a weaker area for him early in his career.  The Nebraska native is primarily a striker, so to have a chance to win this fight, he needs to stay on the outside and pepper away at Hein while avoiding the clinch at all costs.  If he can't deploy a stiff jab in the opening moments of this fight, Dober might be going for a ride courtesy of Hein that ends with his back on the mat and little chance of an escape.

Hein is a heavy favorite and should get the job done here using his Judo skills to toss Dober to the mat repeatedly over three rounds.  Dober is tough enough to survive, but unless something dramatic happens, he's going to struggle with Hein's Judo skills and suffocating ground control.

Two European middleweights will square off in this undercard battle as Poland's Krzysztof Jotko takes on Swedish-born fighter Magnus Cedenblad.

Jotko picked up a win in his lone UFC performance against Bruno Santos, but he seems to still be a developing prospect, despite his perfect 14-0 record.  Jotko has an awkward striking style and loves to land his left hand, as witnessed in his last fight, where he dropped Santos in the second round of a largely uninspired fight between the two middleweights.  Jotko got the bugs worked out in his first bout in the Octagon, so maybe it was just jitters that caused him to have a rather uneven performance.

He probably won't get much time to rest in this fight, however, because Cedenblad pushes the action from start to finish.  He's only gone to decision once in his career, and, typically speaking, Cedenblad is a 'go big or go home' kind of fighter.  He's a powerfully strong middleweight and he'll enter this fight with a two-inch reach advantage, which could serve him well if he chooses to potshot Jotko from the outside while avoiding the clinch.  Through two UFC fights, Cedenblad has connected with just under 56 percent accuracy in his striking, so he's been able to land punches at a high rate; now it's just a matter of connecting while avoiding Jotko's left.

The way Cedenblad fights will get him into trouble against some of the fighters in the upper echelon of the division, but it could serve him well against someone like Jotko, who tends to slow things down and grind on an opponent, round after round.  Cedenblad isn't in the business of getting to decisions, so look for him to come gunning for Jotko early and often in this one.  Still, Jotko won't be an easy out so this might end up being Cedenblad's second decision win, but it's a win nonetheless.

No. 7 ranked bantamweight Iuri Alcantara looks to pick up his second win in a row as he faces Vaughan Lee, who attempts to do the same after bouncing back and forth between victories and defeats ever since he arrived in the UFC in 2011.

Alcantara is a tough customer, as he proved in his fights against Ricardo Lamas, Michihiro Omigawa and even in defeat during his bout against Urijah Faber last year.  Alcantara is a massive bantamweight who used to fight at 155 pounds, if that gives you any idea of size.  Now that big of a weight cut can easily backfire on a fighter, but given the amount of times Alcantara has done it already, he should be fine.  Alcantara is very even tempered in his fights, where he lands strikes at just under two and a half per minute while mixing in almost two takedowns per 15 minutes in the cage.  Due to his size, don't ever underestimate his strength either, because Alcantara could easily be one of the most powerful fighters in the UFC at 135 pounds.

As for Lee, he comes into this fight off a quality win over Nam Phan while still searching for consistency in his UFC career.  He currently stands with a 3-3 record, and while all his losses come to top 10 opponents, it doesn't bode well for him considering he's facing another ranked fighter this time.  Lee has shown flashes of brilliance, like in his fight against Norifumi “Kid” Yamamoto or Phan in his last fight, but he's struggled mightily against the best fighters he's faced such as T.J. Dillashaw and Raphael Assuncao.

Unless Lee can find a way to get past Alcantara's power, this could be a bad night for the Englishman.  Alcantara should be able to muscle Lee around the cage at will, and if he lands a combination, that could be lights out, night over.  Alcantara can't be overconfident because Lee still possesses the ability to surprise him, but given the skill sets going into this one, expect the Brazilian to get the finish within the first two rounds.

It could be a do or die situation for these two featherweights as Andy Ogle looks to improve upon his 1-3 record in his last four fights while taking on dangerous striker Maximo Blanco, who has a similar struggle, going 1-4 in his last five.

Ogle has proven to be a very tough customer even in defeat, and when he wins, the British fighter can put together brilliant performances like he did over former WEC contender Josh Grispi.  Like a lot of British fighters, Ogle has sound boxing and footwork, landing his shots at just under 49 percent accuracy in the UFC.  Ogle struggled in his last fight facing a submission specialist in Charles Oliveira, but he probably won't have to worry much about that happening again in this fight.

Maximo Blanco was a highly-regarded prospect when he came to the UFC in 2012. During his best days while fighting in Japan, Blanco was a lightning bolt whenever he stepped into the cage, unleashing hellish strikes on all of his opponents, just pummeling his way to victory again and again.  Since coming to the UFC, however, Blanco has seen how the other half lives.  He's managed only one win thus far in a slugfest with Sam Sicilia, and his losses to Marcus Brimage and Felipe Arantes have been lackluster at best.

What Blanco has done better since coming to the UFC is work on his defense, where he boasts a 74 percent rate, which is remarkably better than Ogle, who comes in at just a shade under 53 percent.  The reason that statistic is important is because of the flurry of strikes that Blanco is capable of throwing if he finds his comfort zone in the Octagon.  Blanco has to know this is a 'win or go home' situation, and if he plans on staying in the UFC, he needs to throw everything and the kitchen sink at Ogle to get the win.

These two are capable of a Fight of the Night-type performance, but Blanco's power and ability to win wild exchanges gives him a slight edge to pull off the decision and stave off unemployment.