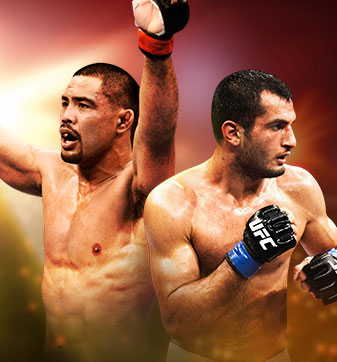 The UFC will return to Germany for the first time in four years with this Saturday’s UFC Fight Night card, which is headlined live on UFC FIGHT PASS by a bevy of top middleweight talent as Mark Munoz and Gegard Mousasi face off in the five-round main event while CB Dollaway takes on Francis Carmont in the co-main event of the evening.

The show is stacked with international talent, including former Ultimate Fighter competitor Luke Barnatt making the short trip from England to Germany, while Tom Niinimaki looks to make it two in a row when he travels from his home country in Finland for the card in Europe.

In today's fantasy preview, we are going to break down the four fights on the main card to see which fighters have the best chance of winning and if there any upsets on the horizon for Saturday's show in Germany.

The main event pits two middleweights at a serious crossroads in their respective careers.  Gegard Mousasi was expected to be a serious contender when he dropped back down to 185 pounds earlier this year, but his path to greatness was derailed in a hurry when he ran into Lyoto Machida, losing by unanimous decision back in February.  Machida also handed Mark Munoz his last loss with a thunderous head kick knockout that finished his former training partner in quick order in 2013.

Now with both fighters hoping to get back into title contendership this year, a victory isn't just important - it's a must win for Munoz and Mousasi.

Coming into the fight, Mousasi appears to have a few advantages on his side, most notably his powerful kickboxing game, which is typically where he likes to keep his fights.  Mousasi plods forward and doesn't have the quickest hands or footwork, but when he launches a strike at an opponent, he means to knock them out in a hurry.  Mousasi is also incredibly hard to hit with his nearly 79 percent striking defense.

As for Munoz, his strategy has to be focused on a ground attack against Mousasi using his formidable wrestling skills.  As a former NCAA champion, Munoz has the grappling to give anyone problems and he's not hiding the fact that he wants to take an opponent to the mat.  He averages 9.34 takedowns per 15 minutes in the cage and once he has you down, he unleashes his signature 'Donkey Kong' punches, which might just be the most vicious in the entire sport.  As a matter of fact, almost 45 percent of Munoz's total strikes are landed on the ground, so getting Mousasi down is paramount if he wants to win.

While the oddsmakers have Mousasi as a decided favorite going into the fight, his slow feet and inability to stuff the takedown in past fights seems like a recipe built for Munoz to succeed.  Mousasi has given up at least one takedown in each of his two UFC fights and neither of those fighters had the wrestling credentials of Munoz.  Now this one could end quickly and emphatically if Mousasi connects, but the longer this fight wears on and Munoz gets this to the ground, it could be a long night for the favored Dutch fighter.

In a battle of ground technicians, Francis Carmont looks to bounce back from his recent loss to Ronaldo “Jacare” Souza, as he takes on former Ultimate Fighter finalist CB Dollaway in the co-main event from Germany.

Prior to the fight with Souza, Carmont had been a machine in most of his UFC bouts, taking opponents to the mat at will and wearing them down over the course of 15 minutes.  He took Costas Philippou down over and over again during their fight, and while his UFC average only accounts for two takedowns per 15 minutes, once Carmont gets on top, there's little chance anyone is getting up again.

The problem he'll run into this fight, however, is that Dollaway is a former All-American wrestler with just over 53 percent accuracy on his own takedowns while stuffing almost 86 percent of his opponent's attempts against him.  Dollaway came into this sport as a wrestler, and now he's quickly developed his hands as well, as he showed in his knockout of Cezar Mutante in Brazil as well as in his bout against Tim Boetsch.  Dollaway really seems to be hitting his stride right now and that could be bad news for Carmont.

Where Dollaway has to be careful is getting stuck in the clinch with Carmont because even though he's the superior wrestler, that doesn't mean the Frenchman can't bury his shoulder and force him to play defense against the cage.  If Dollaway can avoid that aspect, he seems to have the advantage in power on the feet as well as wrestling on the mat.  Dollaway has really started to come into his own over the past year, and so long as he doesn't exude too much confidence in this fight, he should be able to stop Carmont's takedowns and pummel him on the feet with his boxing.  If the fight does hit the ground, look for Dollaway to be the one countering a Carmont takedown, and then looking for a submission to finish the fight.  Chances are this one will go to a decision because Carmont has been incredibly tough to overwhelm during his UFC career, but this could be a great showcase for Dollaway to shine on Saturday in Germany.

Somebody's '0' has to go as two undefeated fighters face off in this middleweight showdown between British fighter Luke Barnatt and upstart American Sean Strickland.

Since coming off of the Ultimate Fighter season 17 under the tutelage of coach Chael Sonnen, Barnatt has looked fantastic in his three performances.  He dominated Collin Hart in the show finale before submitting veteran fighter Andrew Craig and making short work of newcomer Mats Nilsson in the first round of their fight in March.  Barnatt will once again come into this fight as a comfortable favorite with his freakishly long reach and rapidly improving MMA game.

Strickland was extremely impressive in his lone Octagon performance, especially considering he stepped up and took his bout against Bubba McDaniel on short notice.  Strickland made short work of McDaniel and now he has the chance to fight with a full training camp and knowledge about his opponent standing across the Octagon from him.

On paper this seems like another fight for Barnatt to win while impressing the European crowd, who will surely be on his side.  With a five inch reach advantage and a ridiculous striking rate where he's landing 7.41 significant strikes per minute, Barnatt has been nothing short of dominant since coming off the reality show.

But everybody loves an upset and Strickland could certainly be the guy to pull it off in this one.  Strickland is an experienced fighter with a 14-0 record and a background based in jiu-jitsu.  Don't let that fool you, however, because Strickland also has some serious knockout power in his hands and he loves to put an opponent down and finish them before the final horn sounds.

The last time Barnatt faced an underdog he went out and bullied his opponent until he got the finish.  He may try to do that again this time and if he can put Strickland on the end of his punches, Barnatt could get another first round stoppage.  That said, Strickland is no pushover and he's got the swagger to step into enemy territory, refuse to back down and find the way to land the right punch or slip the perfect submission to surprise Barnatt and tack on another finish to his already impressive record.

Coming off an impressive win over Rani Yahya in his debut, Finland-born grappler Tom Niinimaki looks to make it two in a row when he faces fellow Nordic fighter Niklas Backstrom, who hails from Sweden while making his UFC debut on short notice.

Niinimaki is a prospect to keep an eye on this year because not only does he come to the UFC with a wealth of experience, he's already taken out some seriously veteran competition including wins over former UFC fighter Walel Watson and former WEC champion Chase Beebe.  Niinimaki has great ground control with one of the best kimuras in the game today, but he's well-rounded enough to stay out of trouble on the feet, which is certainly where his opponent will want to keep this fight.

Backstrom is 7-0 as a professional with a slew of knockouts to his credit, but it would appear he's stepping into a shark tank for this fight.  Backstrom could still develop into a solid UFC bantamweight, but this isn't the best showcase for him to shine.

Expect Niinimaki to grapple with Backstrom from the moment the referee says go and if he can drag this to the ground early, look for a Performance of the Night bonus to go to the bantamweight from Finland as he should lock up a submission and kick off the show in the right way.