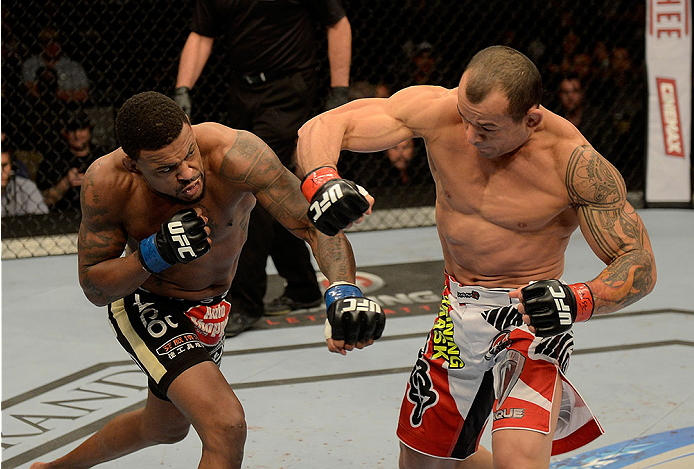 When the UFC returns to Atlantic City, New Jersey on Wednesday night, there will be a slew of notables on both the main card and the preliminary card with a group of veterans and newcomers hoping to make a big impact early in the night.

Gleison Tibau and Pat Healy battle in the featured bout of the undercard, as the two lightweights desperately scratch and claw to hold onto the edge of the 155-pound rankings and look for solid ground after some shaky starts as of late.  Also on the card, former Ultimate Fighter Jessamyn Duke looks to impress after a lackluster showing in her last fight when she takes on ultra tough veteran Leslie Smith.

And the women's strawweight division will officially debut on the undercard of UFC Fight Night from Atlantic City as top-rated competitor Claudia Gadelha takes on Tina Lahdemaki in an intriguing bout at 115 pounds.

In today's fantasy preview, we'll examine some of these undercard fights to see who has the advantage to put you over the edge when the final point tallies are totaled.

With 21 fights in the UFC, Gleison Tibau is a true veteran of the Octagon who has faced the best of the best in the division for the past eight years.  Tibau hasn't ever been considered a title contender, but rarely does anyone that beats the Brazilian veteran not find a way to land in that conversation eventually.  Training out of American Top Team in Florida, Tibau works with the best of the best on a daily basis and he's going to be tough for any 155-pounder to beat in the Octagon.

Tibau has proven to be a relentless ground fighter throughout his UFC career, averaging 4.37 takedowns per 15 minutes with 55.91 percent accuracy - both very good stats, especially when you consider he's had 21 fights in the Octagon.  Tibau's striking is probably his weakest point, but he's no slouch there either and he shows good defense, blocking just over 64 percent of his opponent's punches and kicks.  On the ground is where Tibau is a bear, pushing down on his opponents with a huge frame at lightweight as he routinely cuts upwards of 30 pounds to make the 155-pound limit.  He's almost always the fighter on top as well because he defends nearly 92 percent of takedowns attempted, so chances are if this fight hits the mat it's because Tibau wants it there.

It's that area that causes his opponent Pat Healy some problems.

Healy is a grinder with equal size and wrestling prowess, but can he find a way to drag Tibau into deep water without landing there himself in the process?  Healy came storming out of the gates in his UFC debut with a win over Jim Miller (later reversed to a no contest after Healy failed a post-fight drug test for marijuana), but since that time he's fallen back to Earth with three consecutive losses and no signs of breathing room with this matchup either.  Healy is a Jack-of-all-trades type of fighter - good everywhere but not great anywhere, and that could hurt him against Tibau, especially over the course of a three-round fight.

If Tibau can get Healy down and start pushing his weight on him early, the former Strikeforce fighter may struggle to find a rhythm and that doesn't bode well for his long-term success in this bout.  Expect Tibau to start strong and wear Healy down round after round until the final horn sounds, handing him the win to cap off the preliminary card.

Former Ultimate Fighter competitor Jessamyn Duke will look to erase the memories of a not-so-great performance in her last trip to the cage when she takes on 12-fight veteran Leslie Smith on Wednesday night.

Duke is a long, rangy striker with a 71-inch reach, who displayed some serious toughness and grit while competing on the reality show under the guidance of UFC women's bantamweight champion Ronda Rousey.  Duke is very tall for this division, but she likes to work from inside the clinch with her Muay Thai technique, where she lands an incredible 5.9 strikes per minute with 56.19 percent accuracy.

Smith is going to be a tough test for Duke in only her sixth pro fight, however, as she brings to the table a much higher level of experience with a serious skill set that's already been tested against some of the best fighters in the division.  Smith made her debut on short notice and lost to former Strikeforce champion Sarah Kaufman, but that's only after she nearly knocked out the Canadian in their first fight a year ago.  She's picked up TKO wins over notable names like Kaitlin Young, and also has a win over current UFC fighter Raquel Pennington as well.

Smith is a serious threat as a kickboxer, especially from the outside, where she touts a fight-changing head kick as Kaufman experienced in their first fight.  She's also well versed in Brazilian Jiu-Jitsu, training with the Cesar Gracie and Skrap Pack fight teams, where names like Gilbert Melendez and Jake Shields are usual training partners.  Smith is a very exciting fighter known for pushing the pace and keeping an incredible work rate throughout all of her bouts.

If Smith can put together her normal level of striking and aggressiveness while avoiding Duke's clinch game, she should earn a clean sweep on the judges' scorecards.  Smith's kickboxing is hard to deal with and she's relentless throughout every minute of every fight.  The fact is that Duke is still trying to find her footing in the UFC and this is going to be another tough test for the young fighter out of Kentucky.  The good side is Smith has a tendency to get into some throwdowns with opponents, so that always leaves an opening for Duke to take advantage, but chances are the veteran will get her first UFC win by decision.

Brazilian Hugo Viana will look for his second win in a row while facing another fighter coming out of the New York camp that produced both middleweight champion Chris Weidman and recent Ultimate Fighter winner Eddie Gordon.

Viana is a very aggressive fighter in his attacks, where he lands 4.6 strikes per minute, but he does tend to get a little wild, which accounts for his 39.51 percent accuracy.  He's never attempted a takedown in his four UFC fights, so it's easy to figure out he'll want this one to stay standing.

Given his nature to plow forward looking for the knockout gives his opponent Aljamain Sterling some opportunities to pick him apart. Sterling is a good counter striker with creative punches and kicks that come from a lot of different angles.  He's got good accuracy, landing on over 50 percent of his strikes, and he's got wrestling to ground the Brazilian as well, with his takedowns hitting 60 percent of the time as well.  Sterling just has to weather the early storm from Viana and then start to pick his shots and this fight will be his to win.

Counter striking is the key for Sterling to win, and if he stays patient and doesn't get drawn into a slugfest with Viana, this will serve as the second win in a row for the young newcomer since joining the UFC earlier this year.

The women's strawweight division will officially kick off with UFC Fight Night in Atlantic City and, in a rare treat, arguably the best fighter in the weight class will debut on the card.

Claudia Gadelha would have been an early favorite to win The Ultimate Fighter season 20 if she was on the show that is taping right now.  But this massive strawweight will go ahead and fight while waiting for the eventual champion to be crowned so she can target the winner.

Gadelha is the real deal, folks.  She's a Nova Uniao fighter, so she trains alongside Jose Aldo and Renan Barao on any given day, and Gadelha is as good as it gets when it comes to combining a devastating submission game with a powerful striking arsenal as well.  Gadelha is a world class Brazilian Jiu-Jitsu black belt with several grappling titles under her belt, and her striking isn't far behind as she's knocked out two of her last three opponents.

Lahdemaki isn't a bad fighter by any means, carrying an undefeated record out of Finland, but she's mostly known for her ground game and that will play directly into Gadehla's biggest strengths. The only thing that stops this Brazilian star from running roughshod over Lahdemaki is her weight cut, because that has backfired on her before in previous fights.

Outside of that one issue, Gadelha will likely be the first fighter challenging for the women's strawweight title once TUF 20 is wrapped and a champion is crowned. She's one of the best two or three fighters in the world at 115 pounds and this will be her introduction to the UFC fans in Atlantic City.  Gadehla should be impressive, putting Lahdemaki away in the first round and making a strong statement to all of the women competing at 115 pounds to keep the title warm until she gets her chance to take the gold back to Brazil.