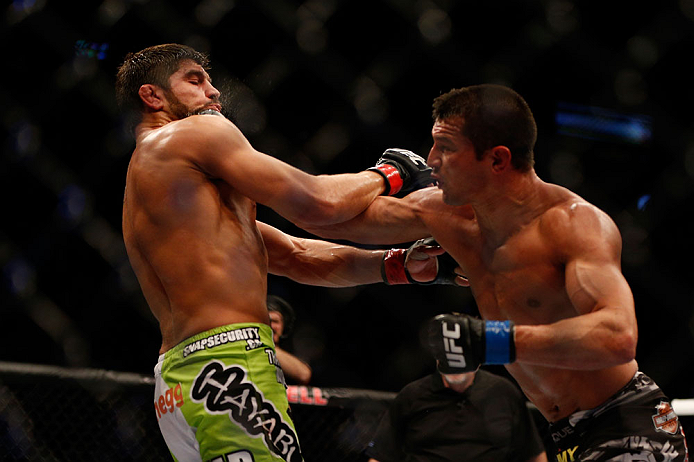 The prelims for the upcoming UFC Fight Night: Henderson vs. Khabilov card only go five fights deep, but there are some great matchups to keep an eye on as the night gets started.

Plus the barista is back as Patrick Cummins makes his second appearance in the Octagon, where he draws late replacement Roger Narvaez in a light heavyweight contest.

In today's fantasy preview, we'll break down some of these prelim matchups to see who has the edge come Saturday night.

Following a perfect 10-0 start to his career, Sergio Pettis saw how the other half lived when he fell to Alex Caceres in his last fight after winning a big portion of the bout before getting caught in a submission that cost him the win.  Every fighter deals with losses and that could have been the wakeup call necessary for Pettis to go on a run similar to his big brother Anthony when he fell to defeat to Bart Palaszewski in his second fight while competing under the WEC banner years ago.

Pettis is a super talented fighter who just hasn't shown all his weapons in the UFC as of yet.  Maybe the pressure of being the undefeated brother of the best lightweight in the world was mounting and now coming off a loss he'll be able to relax and perform just like he did prior to arriving in the Octagon.  Pettis is a very active fighter, throwing nearly five strikes per minute, and if he can let his hands go in this fight, he could possibly score his first UFC knockout.

Meza is a big fighter for bantamweight, however, and not only will he have a size advantage but he'll also possess a three-inch reach advantage.  Meza looked solid in his lone UFC win over John Albert, putting away the former Ultimate Fighter by rear naked choke, but consistency has been his biggest issue and it could cost him in this fight as well.

Pettis is fast and elusive and if he really has managed to get rid of the butterflies that seemed to haunt his first two fights in the UFC, he should out strike and out point Meza to get the win by decision.

It's a clash of styles as Bobby Voelker, known best for his knockouts and striking style, tries to stave off a UFC release following three straight losses when he takes on submission specialist Lance Benoist.

Voelker currently sits at 0-3 in the UFC, but that record doesn't truly tell how tough he's been in all of his fights.  He arguably should have gotten the nod against Patrick Cote in his debut fight and while he definitely lost to William Macario in his last bout, he was in it to win it for every second of every round.  Voelker loves to wing his punches in combinations, landing just over four and a half strikes per minute, but what generally hurts him is his defense (or lack thereof).  Voelker defends only 41.34 percent of strikes against him, and he absorbs 6.59 strikes per minute, which means for every strike he lands, he's eating two back in return.

Despite Voelker's defensive woes, Benoist isn't setting the world on fire with his stand-up but he can get the job done.  Benoist has landed with 50 percent accuracy through three fights in the UFC while defending just over 55 percent of his opponent's offense.

Benoist has almost forgotten about his submission game in the UFC, where he's averaging only 1.33 takedowns per 15 minutes, and that's where this fight could backfire in a hurry.  Regardless of Voelker's defense, he hits like a truck, and if Benoist isn't giving him any indication that a takedown could be looming, it gives the Strikeforce veteran openings to drop bombs.

If Voelker can back Benoist up and start to unload shots, this is his fight to win.  Voelker is tough as leather and he dishes it out as well as he takes it.  It's not always the most successful game plan, but this time around it should get the job done.

It seems so long ago that Scott Jorgensen was one of the best bantamweights on the planet, competing for the 135-pound title in the final WEC show against Dominick Cruz.  Fast forward and over the last two years, Jorgensen has put together a paltry 1-5 record while moving down to the flyweight division, and as he prepares for his bout against Danny Martinez this weekend, he has to know it's do or die time.

Jorgensen can turn things around with this fight if he can keep Martinez guessing by not over committing to one part of his game.  Jorgensen has fallen in love with striking recently, whereas the early parts of his career saw a wrestling heavy attack.  To beat Martinez, Jorgensen needs to employ both and then pull away for the win.  Jorgensen is a solid kickboxer, landing 3.62 strikes per minute while also averaging 2.2 takedowns per fight.  His ground and pound is some of the nastiest in the division, and that could be a huge weapon against Martinez.

Martinez fires back with a solid ground game of his own while also being a very scrappy fighter.  Chances are that if Martinez is in a fight, he's going to keep it close and make Jorgensen work for every move and every position he lands.  Martinez has amassed a very impressive record outside of his fights against the top 10 opponents he's faced, but this could be the anomaly.

Make no mistake, Jorgensen needs a win here or chances are he's probably going to be looking for a job on Sunday morning.  That said, Jorgensen still possesses top 10 talent with his wrestling pedigree as well as his kickboxing and if he puts it all together he can still be a threat to anyone in the flyweight division.  Knowing that his back is against the wall, hopefully Jorgensen will avoid any shades of being one-dimensional, and if he mixes things up early to keep Martinez guessing, he should walk out with a decision win or possibly even finish the fight with strikes before the final horn sounds.

Following a UFC debut where he had less than a week to prepare and had to take on one of the best light heavyweights in the world, Patrick Cummins gets a do-over for this fight as he'll not only have a full training camp to prepare, but an opponent with an experience level equal to his own.

Cummins didn't get to show much of anything in his first round loss to Cormier, but make no mistake, he's a talented fighter who can hopefully show that off in this matchup at UFC Fight Night in Albuquerque.  Cummins wrestled at Penn State as a walk-on and proceeded to finish his senior year as a runner-up in the NCAA finals, ultimately falling to Ohio State's Tommy Rowlands.  Cummins is a freak athlete who developed a striking game to compliment his wrestling, and now he works out of places like the Reign Training Center in Orange County, California alongside UFC notables like Mark Munoz, Brendan Schaub and Michael Bisping.

Narvaez is typically a middleweight, but he has size at 6'3", so he shouldn't give up too much weight or height to Cummins, but his strengths play into his opponent's biggest weapons, which doesn't bode well in this fight.  Narvaez likes to muscle his opponents around the cage, and work for takedowns from the clinch.  Unfortunately, Cummins' wrestling is far superior and his athletic skills, while unrefined, should still be more than enough to get the win in this fight.

Cummins is explosive with his strikes and he blasts forward with his takedowns. He should be able to put Narvaez down on the mat and do maximum punishment until the referee drags him off and he earns his first UFC victory.