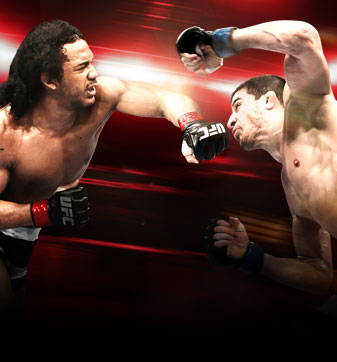 Also on the show is former Ultimate Fighter 1 winner Diego Sanchez, who takes on another TUF champion in Ross Pearson while John Dodson looks to earn a title shot in the flyweight division by facing old foe John Moraga.

All told, this card in New Mexico is one of the best in recent history and in today's fantasy preview we're going to highlight the main card and see who has the edge going into Saturday night.

It's proving ground time for Rustam Khabilov, as the Dagestani fighter looks to keep his undefeated UFC record intact when he takes a decided step up in competition by facing former UFC champion Benson Henderson in the main event.

Through his first few fights, Khabilov has been nothing short of spectacular.  His tenacity inside the cage is one of his greatest assets, as he pursues takedowns like a dog with a bone.  He averages 6.07 takedowns per 15 minutes in the cage so he's quite adept at using his wrestling and Sambo attack to put opponents on their backs.  He's also very proficient with his boxing, where he uses his hands for the majority of his strikes.  Through three UFC fights thus far, Khabilov has landed 47 of 48 strikes to the head or body.

He's got a tough test in front of him, however, as Benson Henderson remains one of the best lightweight fighters in the world.  Henderson is a machine in his fights, outstriking opponents at a two-to-one average while also landing with the third highest takedown accuracy in the division's history (58.1 percent).  Now Henderson does tend to go to decision a lot, but in this fight that bodes well for him because Khabilov hasn't been out of round three and there's no telling how his conditioning will adapt to his opponent's high output rate.

Khabilov was outstruck in his last fight against Jorge Masvidal 38-32 while only going two for 10 on his takedowns.  If he struggles that much against Henderson, he's in for a long night.  Expect Henderson to set the pace early and mix up his attacks before wearing Khabilov down between rounds three and five to pull ahead and win a unanimous decision.

It's a hometown fight for Diego Sanchez as the former TUF 1 winner looks to pick up a win in New Mexico while also stopping a recent two-fight skid in the Octagon.  Sanchez chalked up his last loss to a bout of food poisoning that prevented him from fully performing on fight night, but the reality is that he still fought his normal style, but his opponent Myles Jury refused to engage in a back and forth war.  Jury instead opted for a tactical attack, moving side to side and staying out of Sanchez's aggressive 'step forward in a line' attack.

That style is a key in this fight as well because Sanchez would love nothing more than to draw Pearson into an all-out slugfest.  In that scenario, the odds go much higher in Sanchez’ favor.  He throws a huge volume of strikes, although he only lands with 36.15 percent accuracy, and in his most recent fights, Sanchez has abandoned his once dangerous wrestling and submission game in favor of a stand-up battle.

This is where his opponent Ross Pearson can take over.

Pearson is a very solid boxer who lands 4.22 strikes per minute while also employing the third highest striking defense in lightweight history.  Pearson explodes with his combinations and then moves out of the way before an opponent can return fire. It will be paramount for Pearson to do this against Sanchez, who loves to stalk forward and unload shots like a machine gun until somebody falls over.

Pearson has the strategy to beat Sanchez, but the real question is, can he stick to the game plan in the face of a hostile crowd and heat to put on a great show?  If Pearson stays composed and sticks and moves consistently in the opening few minutes, he's got the boxing and defense to pick up a unanimous decision victory.

John Dodson might just be the best flyweight in the world not named Demetrious Johnson, and he'll look to prove that point when he faces John Moraga on Saturday night.

Since winning The Ultimate Fighter season 14, Dodson has been super impressive.  He's picked up wins over Tim Elliott, Jussier Formiga and Darrell Montague, and was maybe one punch away from taking the title from Johnson when they fought back in January 2013.  Oh and speaking of The Ultimate Fighter, Dodson knocked out new bantamweight champion TJ Dillashaw to win the crown a couple of years back.

Dodson has devastating, fight-changing power in his hands, maybe the most in the entire division.  He lands 3.68 strikes per minute while defending nearly 81 percent of takedowns attempted against him.  The other 19 percent that manage to get him down don't keep him down for long because Dodson's ability to get up from the mat should remind everybody of Chuck Liddell's freakish knack to do the same thing during his fight career.  Above all else, Dodson might be the fastest fighter in all of MMA.  He's lightning quick on his feet and the way he moves around the cage to land his punches is like watching Sonic the Hedgehog gather rings.

John Moraga is no slouch with his striking game, as he produces a lot of pop, especially in the clinch where he finished Ulysses Gomez and sunk in a guillotine choke to finish off Chris Cariaso.  Where Moraga struggled was against a fighter like Demetrious Johnson, who moved around him with relative ease as his speed, footwork and wrestling all gave the challenger problems when they met for the title in 2013.  Moraga could have the problems all over again facing Dodson.

Let's also not forget that Dodson already has a win over Moraga from 2010 and while they are both dramatically improved since that time, it may give the New Mexico native a slight mental edge as well.

Expect Dodson to loosen up early and start uncorking his wild punches in the first or second round and if one slips through, that's all it will take for him to put Moraga away to get the win.

If you're trying to find one potential upset on the main card, look no further than the bantamweight bout between Erik Perez and Bryan Caraway.

Perez is still a developing prospect getting a lot of hype, but he's got a tough test in front of him this weekend.  He's become a proficient and dangerous striker, landing just over four significant strikes per minute while displaying excellent defense, blocking 68.12 percent of his opponent's attempts.  He also throws in 4.69 takedowns per 15 minutes, so Perez is nothing if not consistent, but that still may not be enough to beat Caraway.

Former Ultimate Fighter 14 competitor Caraway doesn't get enough credit for the wins he's put together since the reality show ended, including victories over Mitch Gagnon and Johnny Bedford with his lone loss coming to Takeya Mizugaki in a rather controversial split decision.  Caraway's statistics aren't awe inspiring and he ranks lower in almost all categories than Perez, but that doesn't mean he can't win this fight.

Caraway has incredible perseverance and he seems to excel in the face of adversity now, where that used to be his Achilles heel.  Caraway averages 3.41 takedowns per fight and if he can get Perez down, look for him to do maximum damage before getting back to the feet. Caraway has to be wary of Perez's speed, which will trump his own, but patience can eventually pay off with good counterstriking and takedowns to eventually secure a unanimous decision win.