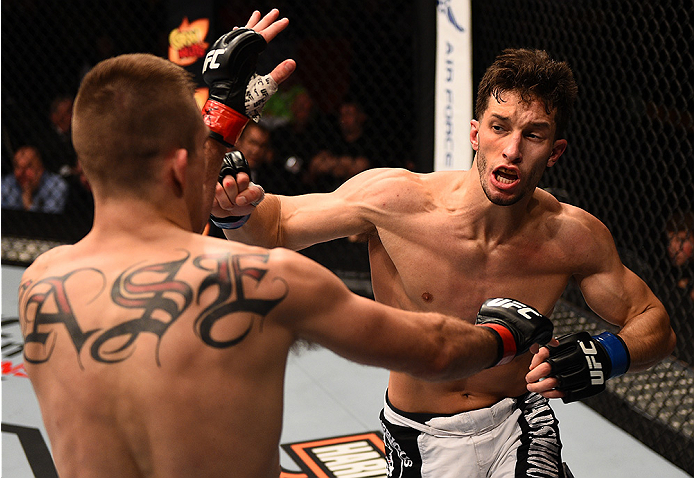 UFC sophomore Frankie Perez is eager to erase the memory of his debut in the big show.

After dropping a short-notice fight against Johnny Case in January, the New Jersey native and Team Frankie Edgar fighter has been chomping at the bit to get back in the Octagon and show fans why the UFC had called him in the first place.

He will have his chance against none other than lightweight standout Sam Stout in a UFC Fight Night bout at Sasktel Centre, in Saskatoon this Sunday, August 23.

To say Perez is excited would be an understatement. “It is pretty awesome man,” he said from the Ricardo Almeida BJJ academy in Robbinsville, NJ. “They gave me two names to pick from and as soon as I heard Sam I said ‘Yes.’ I didn’t even want to hear the other name. I have a lot of making up to do after my first UFC fight. I don’t want the UFC to think of me like I did in my first outing, so with Stout being such a big name I have to jump at that opportunity to show who I really am inside the ring.”

Perez knows what he’s getting into with the London, Ontario veteran. He says he’s been following Stout since high school, and even took a few Shawn Tompkins striking seminars when he first started training MMA.

“I still use some of the techniques Shawn taught me,” Perez says. “It was sad when Shawn died. I’ve always been a big fan of Team Tompkins, not only Sam, but Chris Horodecki and Mark Hominick have all been guys I look up to.”

Perez and Stout match up very well. They are both predominately kickboxers at heart, and this bout is sure to be a fan favorite. Perez hopes he can match the kind of intensity that perennial Stout opponent Spencer Fisher always brought to the Octagon.

“Those fights were always epic,” he said. “I still watch those fights whenever they’re on, even though I know the outcome. They were wars. This fight is going to be a war.”

Perez is not one to make excuses, and while taking nothing away from Johnny Case, he explained that just before getting the call from UFC matchmakers he was going through some personal issues that even caused him to cancel a Ring of Combat lightweight championship fight.

“I cancelled my ROC fight on a Wednesday, and on that Saturday I got the call,” he said. “Those opportunities don’t come all too often and when they do come, it’s go time. But in retrospect, it just wasn’t great timing for me, but I would still say yes in the same situation again. “

Frankie is not unique among professional mixed martial artists who take fights on short notice or even when the timing isn’t optimal. Being called to fill in on a UFC card is akin to being called up from the minor leagues to play for a major league baseball franchise. This time around, Perez is feeling much better.

“I’m better prepared and I’m really looking at this fight as my UFC debut, he said. “That last fight wasn’t me. It was an

imposter. Everybody I train with at Ricardo Almeida’s knows I can do better than that, that I am better than that. No excuses, I don’t take anything away from John. I caught an adrenaline dump in the locker room and I was like a punching bag standing in front of him.”

The team at Ricardo Almeida has seen it all in the professional MMA game. The mats there are shared not only with UFC vet and King of Pancrase Almeida, but former UFC lightweight champ Frankie Edgar – the team’s captain and indisputable leader – WSOF featherweight champ Marlon Moraes, UFC lightweight Edson Barboza and UFC alum Chris “The Story” Liguori.

“Chris is like our secret weapon that no one knows about,” Perez says. “He just got his black belt under Professor Almeida and he’s someone that is constantly there, helping everybody out for their fights. He’s been training with Frankie Edgar for years now, too.”

In addition to Edgar and Almeida, Perez is under the watchful eye of noted boxing coach and strategist Mark Henry, whom Perez credits with helping him mentally prepare for this bout against Stout.

“I’m so motivated, especially coming off a rough outing, but mostly because it’s Sam Stout,” Perez said. “I’ve really upped my training and took my psyche up a notch for this fight. It’s not like I’m under more pressure, but it’s that I hit a wall out of nowhere in my personal life before that fight. I was being hard on myself because I never wanted to be that guy who has two fights in the UFC and then that’s it. But Mark Henry took me aside and told me, ‘You can’t sit and worry about the future, you can only worry about the guy they put in front of you next.’ And that was really key to helping me get my mind where it needs to be for this fight. I don’t feel any urgency about this fight at all.”

Perez has been quite busy since that January bout. He’s been in constant training, helping Edgar prepare for Urijah Faber, Barboza prepare for Paul Felder and Moraes train for his latest successful defense of his title.  Not to mention, Perez is a guy who, when he’s not inside the cage, makes his living both promoting fights and setting up cages for local promotions in the New York Tri-State area. He discovered mixed martial arts during high school. 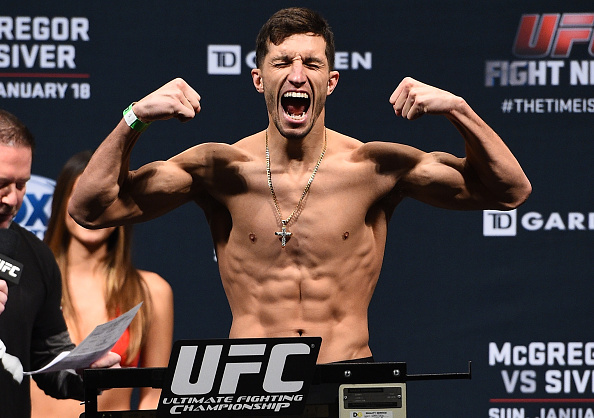 “I don’t have a hard life story at all,” he said.  “I was in high school and a buddy of mine called me and said ‘let’s go see some fights,’ so we got tickets and I saw the fight and I fell in love instantly. I thought it would just be a hobby and it’s grown into what it is now. (UFC veteran) Dante Rivera was the headline fight that night, and I immediately joined Kurt Pellegrino’s gym in Belmar, NJ. I switched gyms a few times but I’ve found a great home with Ricardo.”

While every mixed martial artist is always evolving his or her skill set, Perez says he’s happy with his hands, but still needs to work on his ground game. He’s a brown belt in Brazilian jiu-jitsu and is still not satisfied with his takedown defense, but he doesn’t see any of that hampering his fight against Stout.

“My body feels good and I have a full camp in me,” he said. “Sam is a great fighter, but I think this is going to be one of those fights that’s he’s known for. We’re going to stand and have a great time. There’s definitely going to be a different Frankie Perez in this fight.  I want to be a champion in this sport. I’ve finally made it to the UFC and it’s time for me to start climbing the ladder. August 23rd is the start of my career as far as I’m concerned.”