The UFC's Rise a Dream Come True for Jay Glazer

"It’s been a long time, and to see my friends in this sport in the UFC
get this kind of attention, I still can’t believe it." - Jay Glazer 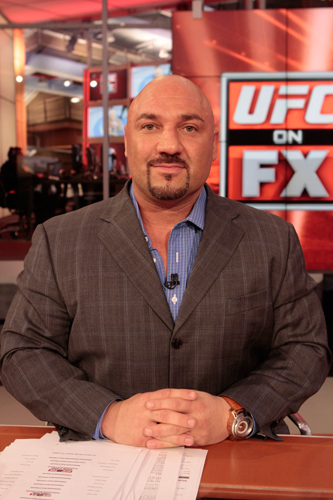 You may wonder what qualifies someone to commentate on fighting. In the case of FOX Sports’ Jay Glazer, how about actually fighting?

“I had two pro fights when I was at CBS, and then I went over to FOX,” said Glazer, who went 1-1 in two mixed martial arts bouts in 2003. “My very first day at FOX, all the bosses there said ‘we don’t know what this cagefighting thing is you’re doing, but you’re done.’ (Laughs) Which was a good thing because I’m a lousy fighter. But I was trying to tell them in 2004 that this was the wave of the future and this is going to be the greatest sport, and it’s not what you think.”

Glazer, who is also renowned for his role as FOX’s NFL Insider and the MMAthletics training system that has attracted not just fighters, but athletes from several different pro sports, has long been an advocate for MMA, and unlike many so-called experts, he talks the talk and walks the walk, with his pro fighting career just one example. But it would take several years for his employers to agree that teaming up with the UFC was the right move.

“As time went on, they became a lot more open to it, and they started loving it,” he said. “There were a couple guys who really liked it - George Greenberg and Eric Shanks - and Dana (White) and Lorenzo (Fertitta) and the UFC have done a great job, as well as the fighters, to tear down those all stigmas attached to the sport. Eight years later, my bosses finally said ‘yeah, we agree with you about that.’”

In 2011, FOX and the UFC joined forces in a landmark deal that shook up the sports world, and with Glazer coming on board as a host for several programs featuring the Octagon’s best, it was finally the perfect storm he had been seeking for years. But that’s jumping ahead. Before the 2011 deal, Glazer wanted to find a way to keep his competitive toe in the MMA pool without being able to fight again, so he began working with UFC vets Ryan Bader, CB Dollaway, Aaron Simpson, Jamie Varner, Carlos Condit, and Jesse Forbes in Arizona.

“Once they told me that I couldn’t fight, I wanted to be part of the physical part of the game somehow,” he said. “So I tried to learn how to coach and train guys, and I merged the two worlds together and I started training football players. (Minnesota Vikings’ defensive end) Jared Allen was the first guy we had. He went from eight sacks to 15 after working with us.”

Soon, the word about Glazer got around, and more and more athletes wanted to work with him. Now all he had to figure out was how he was making these pros elevate their games. The conclusion he came to? It wasn’t just physical, but mental.

“I need to improve guys’ hips and their hands, but most of all the mental aspect,” said Glazer. “It’s pushing people’s breaking points to make the fight or the football or hockey game easier for them. My motto at my place, MMA Athletics, is ‘own your space.’ I don’t care what it is in life you’re doing or what sport you’re playing, you own your space. It’s an attitude.”

Years later, Glazer performs a miraculous juggling act between his work in the NFL and MMA and his daily training sessions, but he manages to make it look easy. And given his long days in the gym with the best in the world, as well as his competitive career, he brings a unique perspective to his broadcasting.

“Because I’ve trained guys, yeah, I think I have more insight than a normal host would,” he said. “I see what these guys go through to go into the Octagon, so I can better relay to the fans how much work these guys put in. They work harder than any other professional athlete in the world, which is why pro athletes are now using mixed martial arts to make themselves better.”

Yet when one of his colleagues or friends, like FUEL TV broadcast partner Chael Sonnen, steps into the Octagon, how does he keep his objectivity intact?

“It’s not hard for me,” he said. “I did it for the Jon Jones fight (at UFC 159 in April). It’s my job to bring the fans as much information and insight as I possibly can. I’ve got a million friends in the NFL and I have to stay objective there. That doesn’t mean I can’t comment on all these guys that I train and that I’m friends with. But one thing I don’t do is I don’t rip fighters. I don’t care what their record is; they put way too much work in to be ripped by anybody. I think there’s a way to bring light to things and to be objective without ripping anybody. So it’s not hard for me to stay objective with Chael, but when I’m watching him or Rashad (Evans), or Brian Stann, or any of the guys, is there that extra pit in your stomach? Yes.”

There won’t be any shortage of work for Glazer come August, when NFL training camps are in high gear and the UFC / FOX partnership goes to the next level, with the launch of FOX Sports 1 on August 17.

“There’s going to be so much programming that you’re going to want on FS1, and it’s going to introduce so many new fans to this great sport,” said Glazer of the network. “People are already going to be going over to this channel for the “mainstream” sports, so it really ramps up the visibility in channel surfing and destination television. So it increases the number of eyeballs and it puts you on a mainstream sports station.”

And as far as he’s concerned, there’s no better place to launch the network than with a UFC card featuring Sonnen vs. Mauricio “Shogun” Rua in a sports town like Boston.

“There couldn’t be a better place to start with our first fight than a place with such a fighting spirit as Boston has,” he said. “(After the terrorist bombing in April) They definitely showed people, ‘hey, you’re gonna mess with us? All right, we’ll show you.’ Those people are resilient, and I’m glad we’re starting it there because I think they deserve it.”

You could say the same thing about Jay Glazer, because when other people didn’t want to hear about mixed martial arts, he was preaching its gospel to the masses. So who deserves this gig more? Glazer. But you won’t hear that from his mouth. He prefers to appreciate where he’s at while leaving the spotlight on the ones with the gloves on.

“I spent the better part of ten years trying to merge my two sports together, and preaching the MMA way in mainstream sports,” he said. “It’s been a long time, and to see my friends in this sport in the UFC get this kind of attention, I still can’t believe it. Years ago, you couldn’t get a free drink in a bar with these guys (Laughs); now people are lining up for their autographs. I couldn’t be more proud to be associated with these guys, and to help them in what I think is really the greatest individual sport in the world, much less to be hosting this first card on our new network. It’s a dream come true.”