Denver, CO – December 1, 2021 - CLMBR, a leader in connected fitness technology, today announced its new partnership with UFC®, the world’s premier mixed martial arts organization. CLMBR and UFC will team up to leverage the power of their respective brands to further connect with their audiences throughout the United States and Canada.

CLMBR sits at the intersection of effective exercise and advanced technology and is known for being the first vertical climber to feature a large-format touch display with on-demand, instructor-led classes. CLMBR provides a wide range of challenging workouts for fitness enthusiasts and elite athletes.

“We’re proud to announce our partnership with UFC,” says Avrum Elmakis, Founder and CEO of CLMBR.  “As one of the newest fitness equipment brands to hit the market, CLMBR looks forward to partnering with UFC and its athletes to show first-hand the benefits of a workout regime with the full-body, zero impact workout machine. We are also excited about the video content that will be generated as part of this program, showcasing CLMBR with UFC athletes in the state-of- the-art UFC Performance Institute in Las Vegas.” 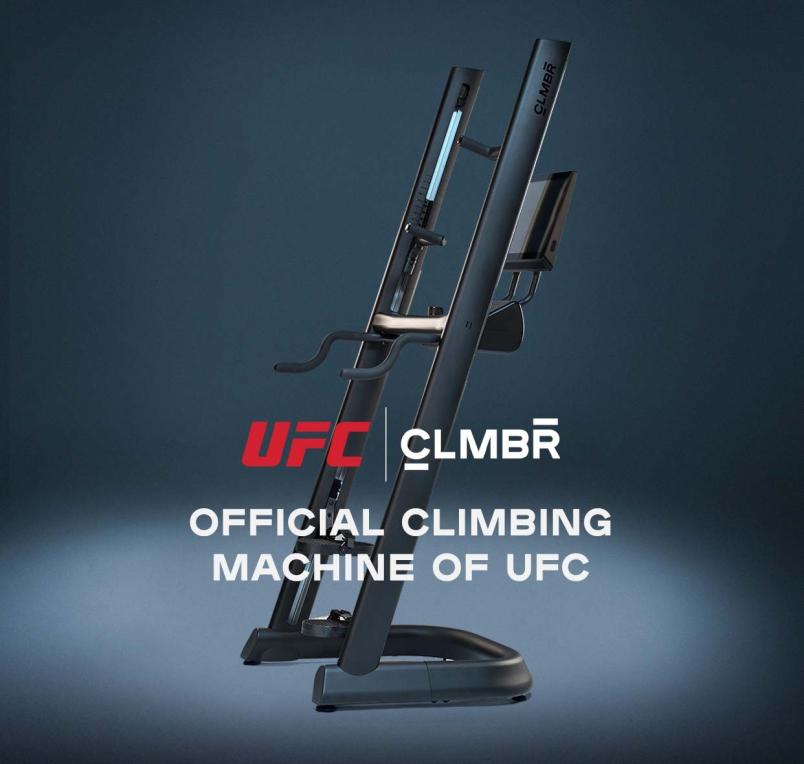 “We are excited to welcome CLMBR aboard as an official partner of UFC,” said Duncan French, Vice President, Performance, UFC.  “CLMBR represents a great product that will naturally fit into our training methods.  Our team of experts at the Performance Institute is looking forward to utilizing CLMBR machines in the strength and conditioning programs we create for UFC athletes.”

As the Official Climbing Machine of the UFC, CLMBR will be integrated into key UFC assets, including broadcast features on select Pay-Per-Views. CLMBR will also have a branded presence inside UFC’s world-famous Octagon® during select events. UFC and CLMBR will also collaborate on a variety of custom and original content that will be distributed across UFC-owned social media channels and digital platforms.

CLMBR is an ergonomic and innovative vertical climbing machine. It’s the first vertical climber to feature a large-format touch display with on-demand, instructor-led classes. CLMBR’s patent-pending design has a high-quality build, a low level of required maintenance, and is easy to move – making it perfect for commercial or at-home use. The machine is beautiful with an open structural design that leaves the user’s views unobstructed, supporting a natural athletic posture. It also offers the latest user interface technology and state-of-the-art companion app that provides on-demand climbing classes and displays key metrics to maximize the user’s experience, including climbed vertical feet and the workout targets they have reached. The integrated audio on CLMBR Connected can fill any space, making it feel just like an in-studio climbing class. Unlike traditional fitness machines, CLMBR offers an efficient and effective full-body strength and cardio workout. With its low impact and ergonomic movement, CLMBR is safe for most ages and levels of ability. The brand was recently named a 2022 CES Innovation Award Honoree for CLMBR Connected.

UFC® is the world’s premier mixed martial arts organization (MMA), with more than 625 million fans and 178 million social media followers. The organization produces more than 40 live events annually in some of the most prestigious arenas around the world, while broadcasting to nearly 900 million TV households across more than 170 countries. UFC’s athlete roster features the world’s best MMA athletes representing more than 75 countries. The organization’s digital offerings include UFC FIGHT PASS®, one of the world’s leading streaming services for combat sports. UFC is owned by global sports and entertainment company Endeavor, and is headquartered in Las Vegas, Nevada. For more information, visit UFC.com and follow UFC at Facebook.com/UFC, Twitter, Snapchat, Instagram and TikTok: @UFC.