Watch the intense staredown between Conor McGregor and Jose Aldo in Toronto - Click Here
And don't forget, tickets for UFC 189 are on sale now - Buy Tickets 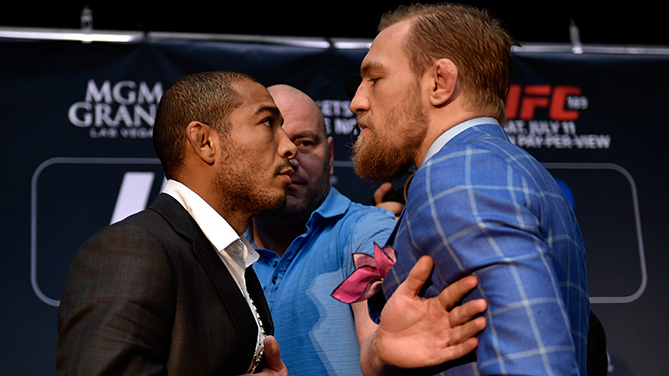 Dana White loves tension-filled face offs between fighters, but even the UFC President has to concede the continued close proximity of featherweight champion Jose Aldo and top challenger Conor McGregor has reached a boiling point.

While temperatures outside hovered just below freezing during a schedule-packed stop in Toronto on Friday, McGregor quickly heated up their feud even more. Twice during a busy morning filled with rapid-fire media interviews in this UFC 189 World Tour, the headstrong Irish superstar reached past the bodyguards shadowing the fighters and put his hands on Aldo’s neck and shoulder.

Aldo flinched in anger the second time. White, as he’s done, stepped in quickly to prevent an escalation. The UFC boss wants this settled in the Octagon on July 11 at the MGM Grand Garden Arena, and not jeopardized with a wayward fist before then.
> READ: New York recap | Boston recap | Los Angeles recap | Las Vegas recap | Rio de Janeiro recap 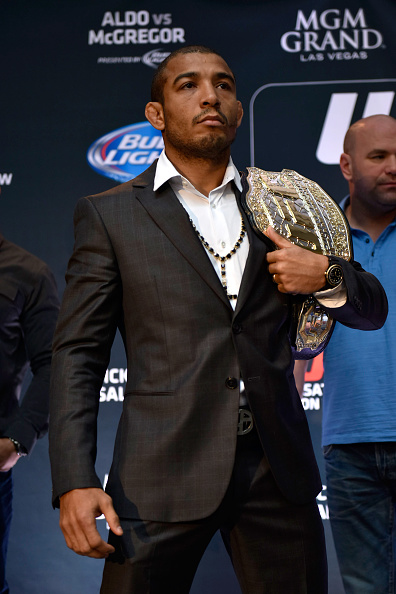 “It’s pretty tense today,” White said. “The most it’s been.”

By the midday, it was decided that Aldo and his team should be moved to another Toronto hotel, near the airport, to prevent any more run-ins with McGregor. But there would be two more close encounters Friday before that separation could take place.

By mid-afternoon, the group was scheduled to appear on TSN’s venerable “Off the Record” show with bombastic host Michael Landsberg, on a remote set atop the new Delta Hotel in downtown Toronto.

Four red bar-height stools were set up for McGregor, White, Aldo and Aldo’s Brazilian Portuguese translator – and they were placed very close together. By this time, Aldo was fuming. He told White he was not interested in being around McGregor anymore. While the group settled into the chairs to record the interviews, Aldo was nowhere to be found.

With cameras waiting and a crew watching, Landsberg, White and McGregor waited. And waited. White made sure his seat was between the fighters. Five minutes turned to 15 minutes …

“He’s coming, right?” Landsberg asked White, laughing nervously. “The … breathlessness in this room is really noticeable! I didn’t do this much chair rearranging since my wedding.” 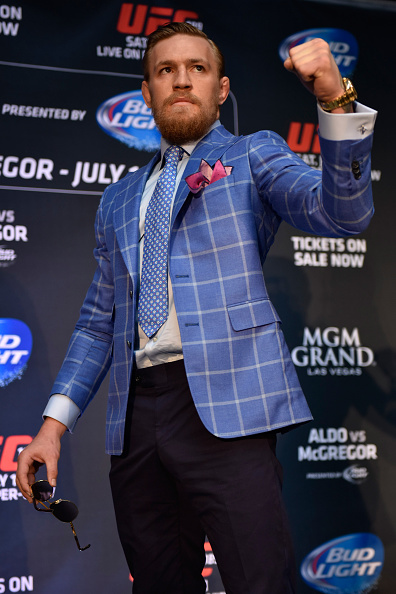 Landsberg then turned to McGregor. “The past week, you and Jose doing what you’re doing on this tour… Dana, you had to go up to Jose’s room and try to convince him to do this (interview), correct?”

“Yes, I had to go up there and talk to him,” White responded. “He’s heading here.”

McGregor repeated that his anger with Aldo stems from the champion disrespecting his rise through the featherweight ranks and “saying my name in vain.”

Would he really fight Aldo in this situation, away from the Octagon, McGregor was asked.

“Yes. When you sit face-to-face with a man who has what you want,” McGregor said with a deep scowl, referencing the UFC featherweight belt, “then you want to take him down.”

After about 20 minutes, Aldo and translator appeared. The champ settled into the chair next to White and stared directly into the cameras. He never looked at McGregor.

“Is there a lot of bad blood between you two?” Aldo was asked. “Conor says you have disrespected him.”

Countered McGregor, “This is not a therapy session. He spoke my name out of turn and has not given me the respect that I deserve!”

With that, the group was hustled out to waiting cars and quickly driven to Toronto’s Eaton Centre, where a stage and fan Q&A area awaited them in the middle of the huge mall and office complex. 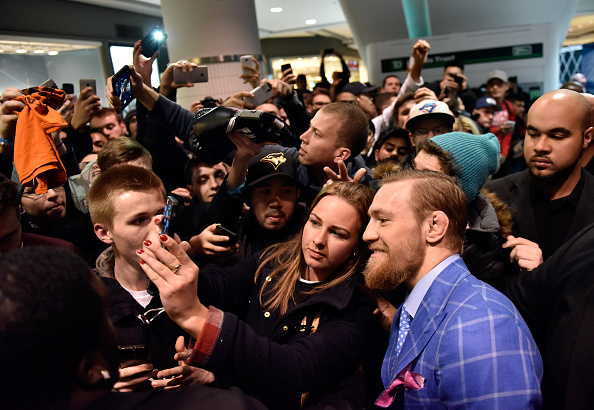 A massive crowd of about 1,000 fans pressed the railings four stories up, staring down into the center court area where Aldo, McGregor, Robbie Lawler and Canadian Rory McDonald took questions from a large group on the ground floor. Once again, this was a largely pro-McGregor reception, and Aldo was peppered with boos and jeers.

Yet again, Aldo maintained his poise. The Brazilian from humble beginnings in Brazil never lost his cool despite the hostility, both from fans and from the piercing insults and taunts of McGregor.

White announced that UFC 189’s first day of ticket sales resulted in a near-sellout within hours, amassing a gate of $7 million. Of those sales, about 2,700 originated from Ireland, 1,800 from Canada and 1,200 from Brazil, White said, and the first episodes of UFC’s popular “Embedded” video log of the World Tour had reached 2.7 million views as of Friday afternoon.

Welterweights Lawler and McDonald also will battle in the UFC 189 pay-per-view card on July 11, but they’ve remained very civil to each other. “I do my fighting inside the Octagon,” Lawler told the crowd.

Not so with Aldo and McGregor, who maintains their fight on July 11 will be over quickly.

“The first four minutes,” the Irishman told the Brazilian, looking across the table at his opponent. “You cannot take my power, it’s as simple as that. If we stood right in the middle of the Octagon and let fists fly, he falls every time. Four minutes, if he’s still on his feet? It will be a formality after that, to see how long his battle-worn chin can hold up.”

A fan asked Aldo what lesson he would teach McGregor in the Octagon. “On July 11, it’ll be a surprise,” Aldo replied. “You fans will really like it.”

The two then went back and forth. 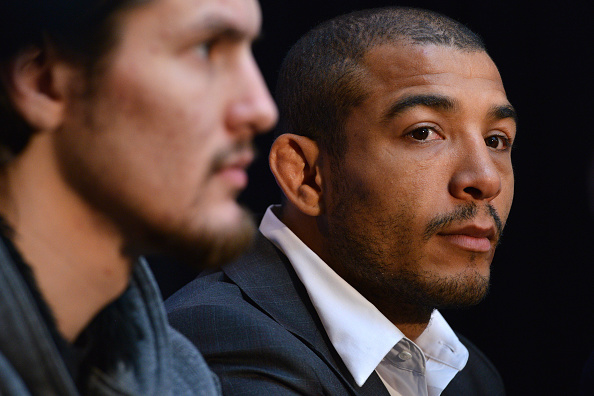 Aldo: “Yeah, that’s why I continue to be the champion. Because I’m a machine.”

The fighters squared off in another stare down that took every bit of White’s strength to keep separate and apart. Aldo went one way, McGregor the other.

They’ll meet again on Monday in London, for another series of interview sessions, face offs and photo opportunities. And McGregor predicts the tension will only increase.

“The intensity will build with silence,” McGregor said cryptically.

London and Dublin – time to get ready.