ROBBIE LAWLER VS RAFAEL DOS ANJOS
Combat sports wisdom is that a SuperFight delayed is not so super anymore, but that’s not the case with Saturday’s main event between Robbie Lawler and Rafael Dos Anjos. Back in 2015, when both held world titles, lightweight champ RDA thought of moving up to 170 pounds and challenging welterweight boss Lawler, but that never happened. Two years later, it may be a better fight now, with Dos Anjos showing his best form yet as a welterweight while Lawler is, well, still Lawler. If Dos Anjos can take Lawler’s bombs and hold off the usual late fight rush from “Ruthless,” he can build up enough points in the middle rounds to win the fight. That’s a big “if,” though, making this compelling viewing whether it goes five or 25 minutes.

RICARDO LAMAS VS JOSH EMMETT
If Ricardo Lamas didn’t halt Jason Knight in the first round in July, I might have a lot more questions about his motivation heading into this co-main event against Josh Emmett. But in taking out the rising star in emphatic fashion, it showed me that no matter what the rankings say, Lamas is showing up to every fight intent on winning big. That could be bad news for late replacement Emmett, but if the talented Californian does pull off the upset in Saturday’s co-main event, he’ll know that he didn’t catch Lamas napping, but that he beat the best possible version of the “Bully” in Winnipeg.

SANTIAGO PONZINIBBIO VS MIKE PERRY
We know this is going to be one to remember, so we could just move on, but I did take something away from my recent chat with Mr. Perry that’s worth telling here. Ponzinibbio is one of those fighters who will not shy away from a blood and spit flying war. I asked Perry if the Argentinean can give him that type of fight. Perry said if Ponzinnibio can take his power, he can. That could lead to a fighter deciding that he really doesn’t want 15 minutes of that, but Perry embraced it, saying he was ready for it all. So get ready, this could end spectacularly in 30 seconds or produce 15 minutes of gritty action that 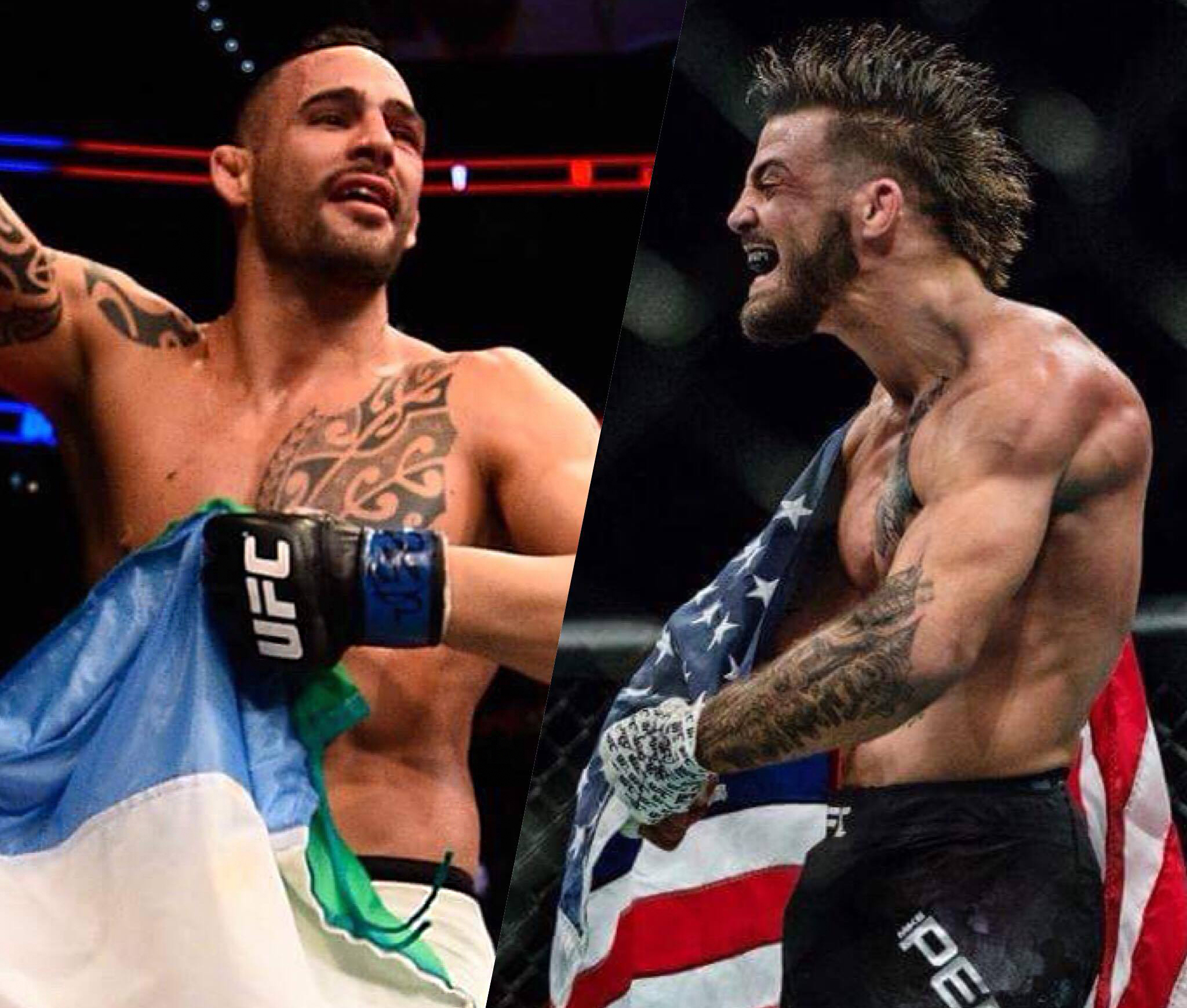 could result in a pair of bonus checks for these two welterweights.

GLOVER TEIXEIRA VS. MISHA CIRKUNOV
If not for the fact that Glover Teixeira is from Brazil and Misha Cirkunov from Latvia, I would be convinced that the two light heavyweights were brothers. Both are soft-spoken gentlemen who leave the trash talking to the kids and instead focus on training, getting better and winning. And as laid-back as they are outside the Octagon, they’re both scary when that gate closes, making this a war of wills that requires your complete attention for 15 minutes or less.

JULIAN MARQUEZ VS DARREN STEWART
Julian Marquez looks like a serious prospect at 185 pounds before he even makes his UFC debut this weekend, thanks to knockout wins over Matt Hamill, Cameron Olson and Phil Hawes. Will he keep the momentum going against Darren Stewart, who is hungry for a UFC win after three misses thus far? It’s hard to pick against him unless the first-time UFC jitters attack.
MORE FROM WINNIPEG: Reasons to Watch | Cannonier Sticking to the Basics | Dos Anjos Rejuvenated

JAN BLACHOWICZ VS JARED CANNONIER
It was only one fight, but when Jan Blachowicz defeated Devin Clark in October, you could almost see his demeanor change as he picked up his third UFC win. That confidence probably led him to take on a fight against Jared Cannonier on short notice, and it makes him a dangerous threat against a fighter who also got a jolt of adrenaline thanks to his move from Alaska to train with the MMA Lab gang in Arizona. Put them both together, and the winner of this one could come down to who breaks the other’s confidence first.

CHAD LAPRISE VS GALORE BOFANDO
Chad Laprise looked like a new man at welterweight his last time out, and he’s confident heading into Saturday’s meeting with the still relatively unknown Galore Bofando. In the little over two minutes we saw the Brit against Charlie Ward in July, he’s got an unorthodox style with the ability to finish in emphatic fashion, and this fight may end up being a case of Laprise living up to his status as favorite as long as he doesn’t make a mistake against an opponent who can make him pay in a split-second for the slightest miscue.

TIM ELLIOTT VS. PIETRO MENGA
Tim Elliott is a nightmare matchup for anyone at 125 pound with a full training camp. To come in on short notice like Pietro Menga is can ramp up the degree of difficulty significantly. But when you’re unbeaten and an underdog, like Menga is, the odds can even out a bit, making this an interesting matchup for fight fans if the Manchester newcomer can decipher Elliott’s unorthodox attack.

JOHN MAKDESSI VS ABEL TRUJILLO
John Makdessi is one of the lightweight division’s greatest enigmas, as you never know which version of “The Bull” will show up on fight night. The same could be said for his Saturday opponent, Abel Trujillo, making this an almost impossible fight to get a serious read on. Trujillo could dominate if he gets the fight to the mat and keeps it there, but he’s not shy about getting into a brawl on the feet, a place where Makdessi would prefer to keep it. And while Makdessi is the better technical striker, Trujillo swings hammers, evening the playing field considerably.

ALESSIO DI CHIRICO VS OLUWALE BAMGBOSE
After a 1-3 start to his UFC career, Oluwale Bamgbose finds himself in a tight situation heading into bout number five against Italy’s Alessio Di Chirico. So to get ready, the New Yorker spent some time with Duke Roufus and Dan Henderson, and if he takes the lessons learned there and adds them to his raw but impressive skill set, he could turn that one into a two in Winnipeg. The patient Di Chirico is a tough matchup, though, especially if he can weather an early blitz and get the fight into the second and third rounds.

JORDAN MEIN VS ERICK SILVA
In their last six combined fights, Jordan Mein and Erick Silva are 1-5. In most cases, the response would be, “So why do I care?” Well, you care because these are two aggressive finishers who have their back up against the wall. The back up against the wall thing usually produces fireworks, and when you add in their fighting styles, this one could end up picking up Fight of the Year consideration by the end of Saturday night. That’s why you should care.

NORDINE TALEB VS DANNY ROBERTS
Nordine Taleb and Danny Roberts were scheduled to face Sultan Aliev and Sheldon Westcott, respectively, on Saturday, but when Aliev and Westcott were forced out of their fights, an even better fight may have surfaced. Taleb is a patient attacker who can explode when necessary (see his win over Erick Silva), while Roberts is a more aggressive sort who seems to always find himself in entertaining scraps. It could be a cat and mouse game for a bit, but I expect to see this one erupt into a fight eventually.