UFC Wichita: On The Rise

A trio of neophytes will take to the cage in hopes of securing their first victories under the UFC banner and building some momentum as 2019 really starts to get rolling. Here is a closer look at those three athletes. This is On the Rise: Wichita Edition.
By E. Spencer Kyte • Mar. 4, 2019

I was really hoping to make a dorky Jeri Ryan, Star Trek: Voyager, “Seven of Nine” joke to kick things off this week, but alas, Saturday’s fight card in Wichita, Kansas is only the sixth offering in the string of consecutive weekend events carrying the UFC and its fans through February and March.

This run, which began in Fortaleza, Brazil with Marlon Moraes stopping Rafael Assuncao in the main event and continued through last weekend in Las Vegas where Kamaru Usman ascended to the top of the welterweight division and Jon Jones re-affirmed his standing as the best fighter in the light heavyweight ranks, has already included the Octagon arriving in one new market and now this weekend’s fight card presents another opportunity for the UFC to break new ground.

While Invicta FC has previously held events in Kansas, the UFC had never been to “The Sunflower State” until now.

Saturday night, 13 pairs of fighters will make their way into the Octagon in Wichita for what should be an entertaining night of action featuring a quartet of compelling welterweight clashes and capped by a monstrous heavyweight matchup between recent title challenger Derrick Lewis and resurgent former champion Junior dos Santos.

But before the big boys close out the show, a trio of neophytes will take to the cage in hopes of securing their first victories under the UFC banner and building some momentum as 2019 really starts to get rolling.

This is On the Rise: Wichita Edition. 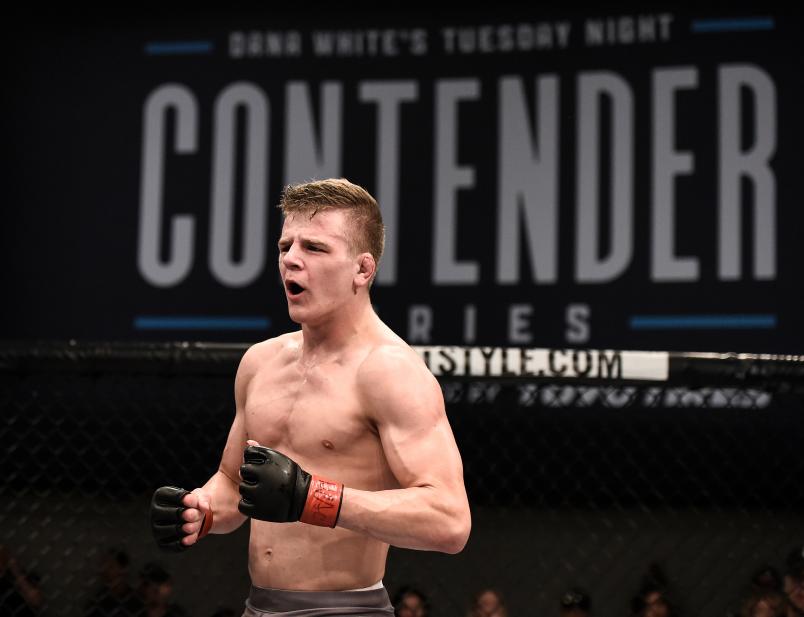 A couple years ago, Dawson appeared to be on the fast track to the Octagon, wasting little time racking up stoppage wins on regional fight cards broadcast on UFC FIGHT PASS. Even after suffering the first loss of his career, the young featherweight bounced back with consecutive victories and landed an opportunity to compete on the first season of Dana White’s Tuesday Night Contender Series.

Just as he had done on the regional circuit, Dawson made quick work of his opponent and impressed the UFC President in the process, earning himself a contract. But he hasn’t fought since.

Unfortunately for Dawson, he was flagged for an anti-doping violation shortly after that victory and was only cleared of any wrongdoing and made eligible to return to competition late last year. But with a miserable 2018 behind him, the 25-year-old looks to make the most of his promotional debut this weekend as he steps in against former TUF contestant Julian Erosa in a preliminary card matchup that is likely to end inside the distance.

Dawson, who trains with James Krause and the crew at Glory MMA and Fitness, is at his best working on the ground, either blasting away with ground-and-pound or hunting for a submission, and if he can drag “Juicy J” to the floor and put him away, he’ll earn himself a spot on the growing list of young talents to watch in the ultra-competitive featherweight division.

Another graduate of the Contender Series, Hughes secured his chance to compete in the Octagon with a first-round stoppage win over Josh Appelt midway through Season 2. The victory pushed his winning streak to four and his overall record to an impressive 10-1 while setting the Strong Style Fight Team member up as an intriguing new addition to the heavyweight division.

While there are bound to be some nerves for the UFC newcomer heading into this one, the matchup might actually provide Hughes with a sense of calm as he’s set to square off with TUF alum Maurice Greene, whom he beat by unanimous decision to win the LFA heavyweight title prior to his appearance on the Contender Series. 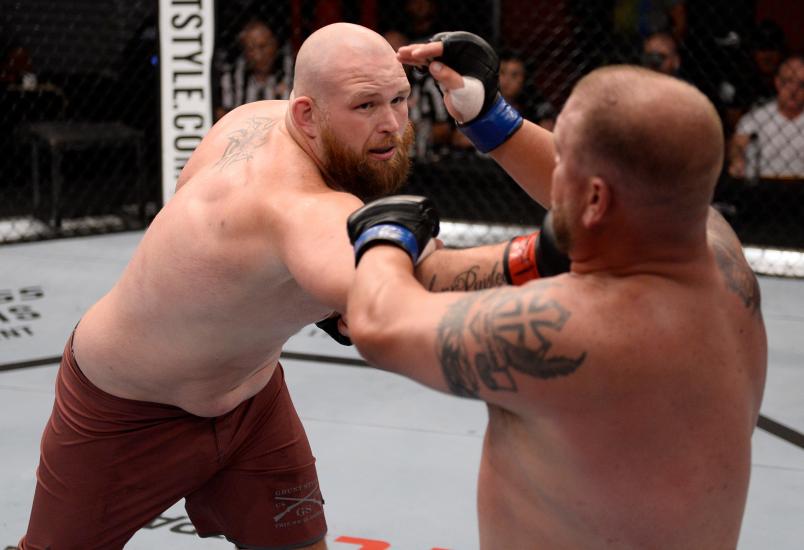 Between training alongside former heavyweight champ Stipe Miocic and running it back with a familiar foe that he’s already beaten, there is good reason to expect a strong showing out of Hughes in his debut.

Moret made his first foray into the Octagon last April as a short-notice replacement for Olivier Aubin-Mercier in a bout with Brazilian lightweight Gilbert Burns. While things didn’t go his way, the fight helped Moret get his foot in the door and now he gets the chance to show what he’s capable of with the benefit of a full camp and a more suitable matchup.

Facing off against Alex White in Saturday’s opener, the 32-year-old Moret will look to get back to the form that saw him win six of his last seven prior to stepping in with Burns last year. Thus far throughout his career, the MMA Lab representative has only lost to fighters who have ascended to the biggest stage in the sport, including his current teammate Bobby Moffett and Brazilian finisher Raoni Barcelos.

Although his nickname is “The Hitman,” the majority of Moret’s finishes have come on the ground, so he will need to get inside on the power-punching White, who has gone 3-5 in eight all-action appearances inside the Octagon thus far. If Moret can get this to the canvas, he should have the advantage and give himself a better opportunity of coming away from Wichita with his first UFC win.