Over the years, UFC has been home to many walkouts that have left fans captivated, entertained and sometimes even intimidated.

But what makes a great walkout? The song choice, creativity and magnitude of the fight all play a role in this unranked, unordered list that features some of the most unforgettable walks to the Octagon.

This wouldn’t be the first time middleweight champion Israel Adesanya caught everyone’s attention with a unique walkout, but it was one of the most entertaining and thought out that UFC fans have ever seen.

MORE ADESANYA: "I want to do something spectacular" | Free Fight: Adesanya vs Whittaker 2 | Athlete Profile

After earning the interim middleweight title against Kelvin Gastelum, Adesanya had a chance to unify the belt against then-champion Robert Whittaker, in his adopted home country of Australia. But as Adesanya made his walk to the Octagon, it seemed like he owned the place.

Received with a mix of boos and cheers, Adesanya huddled up with three dancers before they broke out into a choreographed hip-hop performance right outside the tunnel. The confidence to put on a show before the fight even starts, then to win in the fashion that he did, makes Adesanya’s UFC 243 walkout one to remember.

One of the biggest fights in UFC featherweight history up until that point, UFC 189’s main event between Chad Mendes and Conor McGregor for the interim 145-pound title had a certain aura around the event.

As McGregor, the biggest name in all of combat sports, was making his first walk to the Octagon in search of UFC gold, he came out to a rendition of “The Foggy Dew,” his trademark walkout song, yet this time it was performed live in venue by none other than Sinéad O’Connor herself. 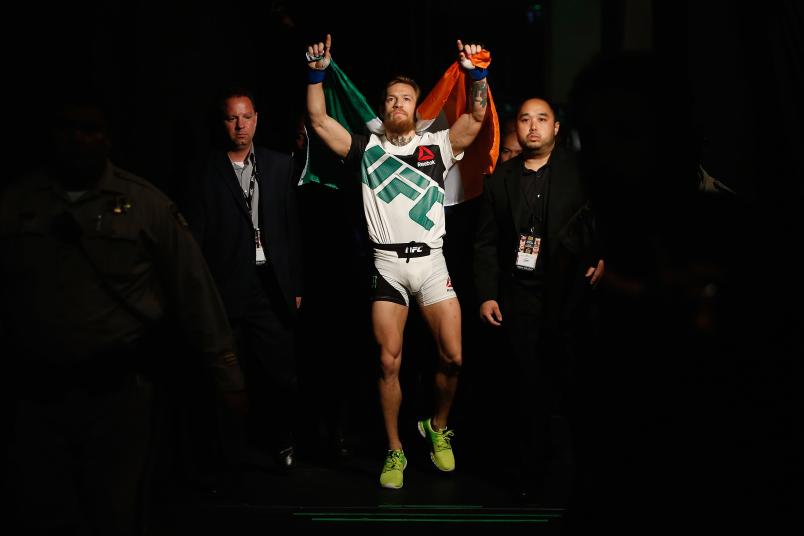 The song, despite not being the usual upbeat tune, was featured in one of the most captivating walkouts in UFC history, drawing in spectators and making the event seem more than just a fight, but a spectacle.

Entering the Octagon second, Mendes also walked out to a live performance from Aaron Lewis, which deserves just as much acclaim as O’Connor’s. Despite falling in the shadow of McGregor’s giant fanbase, the rendition of “Country Boy” was well-performed and gave Mendes’ fans the same captivating feeling as “The Foggy Dew” for McGregor’s.

Brian Ortega’s walkout at UFC 266 may have been one of the most intimidating in UFC history. As T-Mobile Arena was only being illuminated by dark red lighting, the sound of the annual purge announcement from the movie “The Purge” echoed around the arena. 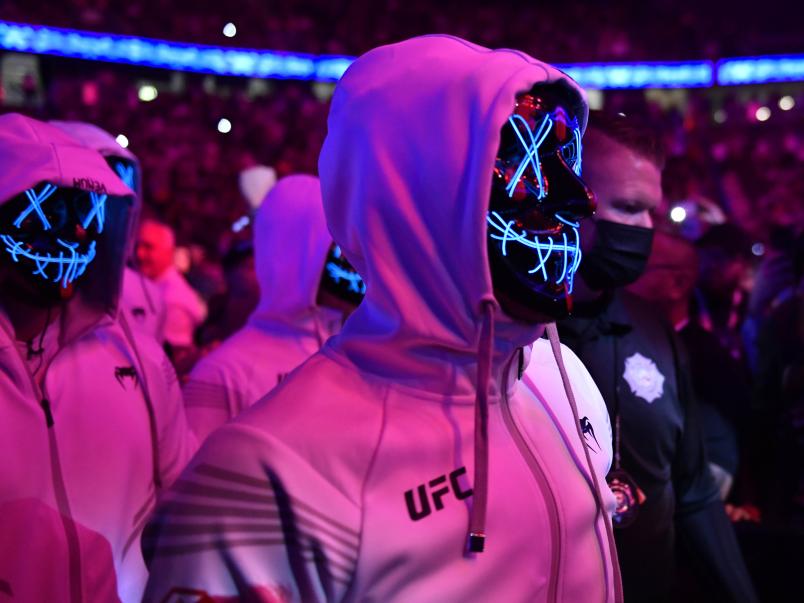 As the horn, that in the film marked the start of the purge, blared, Ortega and his corner walked to the Octagon in masks worn in the films. Creating an unsettling, but mesmerizing, atmosphere, Ortega did well to sway neutral fans in his favor before the toughest fight of his UFC career against Alexander Volkanovski.

While the previous walkouts did a great job putting emphasis on the fighters and building their hype as they made their walk to the Octagon, Darren Till’s walkout to “Sweet Caroline” in his hometown of Liverpool got the crowd involved.

The 8,500+ fans in attendance at M&S Bank Arena sang together in unison, supporting their hometown fighter as he made the walk ahead of his main event bout against Stephen Thompson. Unaware by the amount of support he would be getting, the feeling Till must’ve had in those three minutes is unimaginable.

Although Colby Covington has walked out to Kurt Angle’s historic WWE music numerous times, this fight suited its word choice too well. Covington vs Jorge Masvidal has become one of UFC’s biggest rivalries, earning the pair one of the few non-title fight pay-per-view main events in UFC history. 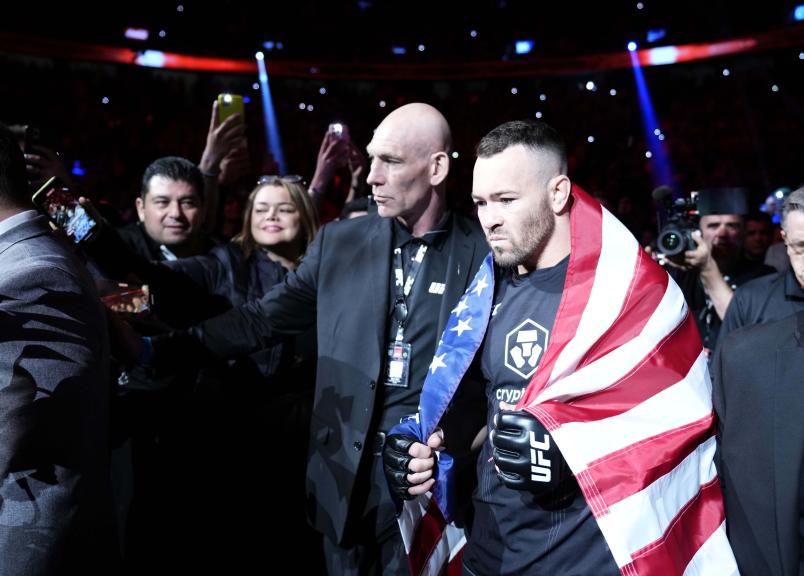 One of the most entertaining personalities, Covington has come into his villain role in recent years, and the getting the “You Suck” chants from the crowd fits perfectly for that character. Whether you’re chanting at Covington or Masvidal, it gets the crowd involved and brings a smile to Covington’s face, contributing to his confident, but dominant, performances inside the Octagon.

Returning to the sport after a near two-year layoff in pursuit of blemishing Floyd Mayweather’s perfect record in a boxing ring, McGregor was fueled by a resentment for UFC 229 foe Khabib Nurmagomedov, the newly crowned lightweight champion.

Entering a foggy Octagon, then strutting to his corner, “The Notorious”’ return and unforgettable buildup to the fight made his walkout one of the most anticipated in history. 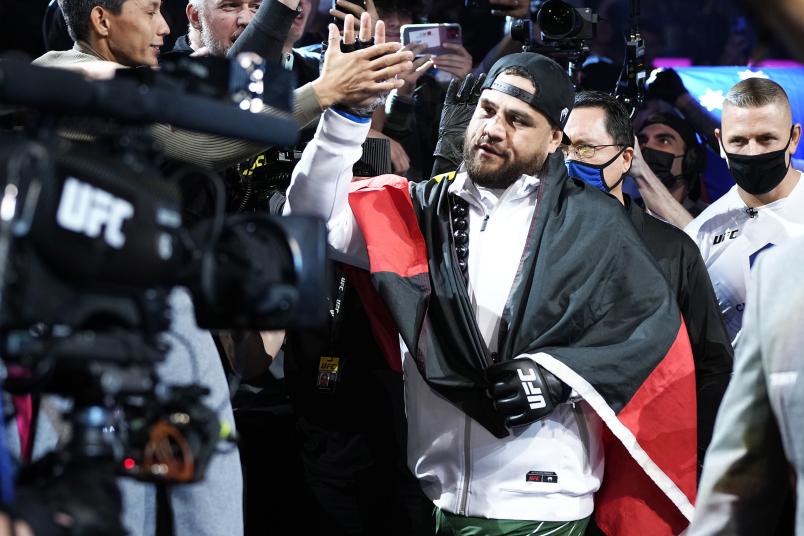 LAS VEGAS, NEVADA - DECEMBER 11: Tai Tuivasa of Australia walks out prior to his heavyweight bout during the UFC 269 event on December 11, 2021 in Las Vegas, Nevada. (Photo by Jeff Bottari/Zuffa LLC)

One of the biggest names in the sport, Tai Tuivasa, has gained rapid popularity through his song choices and post-fight celebrations. At UFC 269, Tuivasa entered the arena to “Barbie Girl,” a rather interesting choice for someone so devastating inside the Octagon.

What makes this walkout unlike any other is that, when asked about the song choice after defeating Augusto Sakai by second round knockout, Tuivasa replied, “I’m a Barbie girl.”

Probably the least well-known walkout on this list, Chris Barnett electrified the Madison Square Garden crowd as he danced his way to the Octagon ahead of his bout against Gian Villante. Drawing a laugh from UFC’s commentators, Barnett showed off fast dance moves that translated directly to the fight. Landing a jaw-dropping spinning wheel kick, Barnett shocked New York City with an unforgettable walkout and knockout.