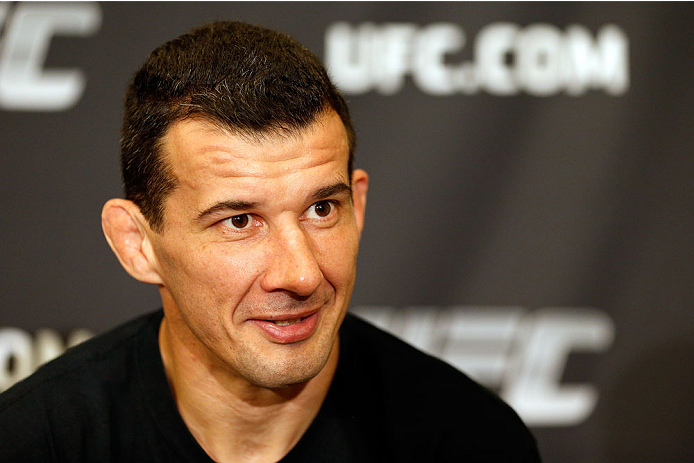 Anthony Perosh was on the outside looking in when the UFC made its first visit to his native Sydney, Australia in February of 2010.

On site to support his friend Elvis Sinosic, Perosh had gone 5-2 since his 0-2 stint in the Octagon in 2006, but when Ben Rothwell fell ill the week of UFC 110, “The Hippo” was in the right place at the right time to accelerate his return.

Perosh took a fight with Mirko Cro Cop on two days’ notice, and while he lost the fight, he won so much more.

“When opportunity knocks, you take it,” Perosh said. “It doesn’t matter who is in front of you or how long the preparation you have is. This was a monster opportunity for me and I wanted to take it. And I get a lot of compliments about that fight. I got a lot of respect, so to speak, from it.”

He also got a restart on a UFC career that would last another nine fights over the ensuing years, one that inspired and excited fans around the globe. But on Monday, Perosh announced his retirement at the age of 43.

“The last camp was especially hard, physically and mentally, and there was a bit of self-doubt, like you’re second guessing yourself,” he explains. “There was way too much of that the last camp. I didn’t tell anyone about it. But I always told everyone else when they asked ‘when are you going to retire,’ I said when one of three things happen: if the body can’t keep up, give it away. If you lose more than you win, give it away. And number three, if you don’t want it anymore, if you keep second guessing yourself and don’t want to be there one hundred percent, it’s time to give it away.

“I tried thinking back to when I won three in a row in the UFC, and how I felt then,” Perosh continues. “I really wanted that feeling back, but I just couldn’t get it back.”

“I hope when people look at my fights, they see that I was a finisher and that I always went for the finish,” -- Anthony Perosh

Perosh lost that fight to Gian Villante at UFC 193 last November, but throughout his career, whether he won or lost, you always knew that he was going to bring a fight.

“I hope when people look at my fights, they see that I was a finisher and that I always went for the finish,” he said. “And even though we do fight MMA, everyone knew that I wanted to get you to the ground and beat you up and choke you out. And I think that’s a beautiful thing in MMA. If someone knows that you’re going to do this particular thing and you still can do it, that’s fantastic.”

It is, and through 12 UFC fights, Perosh’s 5-7 record doesn’t reflect the excitement he brought to the Octagon. Owner of knockout wins over Nick Penner and Vinny Magalhaes and submission victories over Tom Blackledge, Cyrille Diabate and Guto Inocente, Perosh was never in a boring bout, but beyond what happened on fight night, his influence was felt even more strongly in Australia, where the Brazilian Jiu-Jitsu black belt is one of the sport’s pioneers.

“When I fought Cro Cop, it was just me, Kyle (Noke), George Sotiropoulos and James Te Huna,” he said. “That was back in 2010. Now six years later, there are 20-25 Australia and New Zealand fighters (in the UFC). If in another six or seven years there’s 50, that would be fantastic.”

Perosh, who guides 650 students in his two gyms, hopes to be in the corner of some of those fighters one day.

“I’ve had 12 fights in the UFC, but I hope to be in the UFC another 25 times, but this time, I want to walk behind my students and be in their corner,” he said. “So if they can use me as inspiration and think of me as a pioneer, I’m more than happy and privileged for that title.”

Perosh retires with a 15-10 record, finishing all his wins by knockout or submission.