UFC vet Thompson knows he has to continue to evolve

What to expect from @WonderboyMMA vs @GamebredFighter? Thompson knows the two will put on a show Saturday at #UFC217 pic.twitter.com/T6UYFG1DWX
— UFC News (@UFCNews) November 1, 2017

On Saturday night in Madison Square Garden, Jorge Masvidal will be trying to punch, kick and choke Stephen Thompson. But last week in Simpsonville, South Carolina, when the call came in for “Wonderboy” to break training in order to drive the bus for his school’s karate camp, he didn’t hesitate to get behind the wheel.

“I like it,” he said. “I’m around people all the time, so the time to myself is my bus route and I love my bus route. It is one of my times to get away, think about what’s going on.”

At least until the kids get on board, and there are five schools for Thompson to hit on his route.

“And that’s just one bus,” he laughs. “We’ve got three other buses going all over the place. We pick the kids up from school and take them back to the karate school and help out with their homework, get them snacks and get them ready for their karate classes. It’s full-time stuff, man.”

You probably won’t hear this kind of thing from any other pro fighter, especially not in the lead up to fight week, but Thompson has always been different, and that’s meant in the best way possible. So while most would be getting in those last hard sessions and putting their game face on, Thompson is driving a bus and helping out with algebra homework.

“I’ve been fighting since I was 15 years old,” he said by way of explanation, saying that at this point, he knows how to get ready for a fight. That doesn’t mean there aren’t things to work on for the two-time welterweight title challenger.

“Obviously there are things to do in camp – watching fight footage, studying your opponent, making sure you’re in shape, which I pretty much stay in shape anyway,” Thompson explains. “But you’ve also got to be mentally ready for these grinding situations, because sometimes those situations happen when you least expect it in a fight. Maybe it’s a weight cut that’s gone bad or your muscles are fatigued and sometimes your body reacts in different ways, and you’re never a hundred percent when you step out there anyway. So you have to prepare for things like that, and I think the big part of it is looking at the fight footage and trying to break down your opponent.”

If anything, this whole scenario is more enjoyable this time around, because for the first time in a year, he’s preparing for someone not named Tyron Woodley. And despite leaving 10 rounds with the champ with a draw and a majority decision loss, the 34-year-old isn’t looking at his return to Madison Square Garden for the first time since that draw last year as an opportunity to exorcise some demons.

“I haven’t thought about it since I was there (Madison Square Garden) last,” he said. “But going there is exciting for me because it gives me somebody else to look at. I was thinking about Tyron for a year, preparing for him, and now I’ve got somebody new to prepare for, and I’ve been out for eight months, so I’m really itching to get out there and do it again. I’m excited, and I love New York. It’s like a home away from home. I 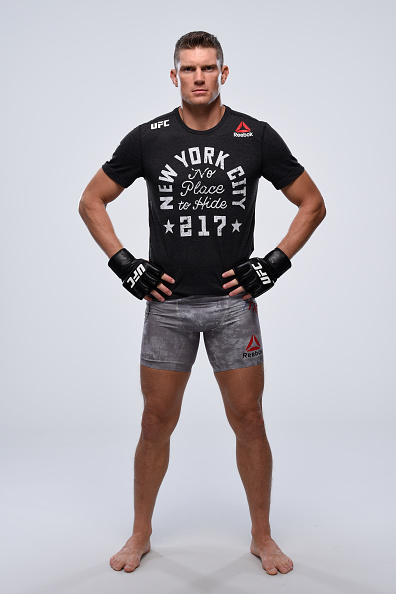 spent a lot of time on Long Island, I spent a lot of time this past summer in New York City, and I love it. So to be able to perform at Madison Square Garden again, where those legendary performers and athletes have performed, now I can say I’m one of them.”

And considering that he’s still ranked number two in the world at 170 pounds, a win over the No. 4-ranked Masvidal keeps him in the running for another crack at the belt. But don’t expect to see the same version of “Wonderboy” that the world saw in the two bouts with Woodley, because as soon as that last fight ended, he was already looking to take the next step in his fighting evolution.

“Directly after the fights I beat myself up pretty good, saying I should have done this, I should have done that, but what happened happened,” he said. “I can always go back and even if it’s a win, a first round knockout, I always think I could have done something better. And that’s the mentality. A lot of fighters at my level are pretty set on how they are. They don’t want to improve, and you see those guys go downhill from there. So to stay at the top of the game, especially with the new up and comers coming up, you gotta keep evolving. You’ve got to think that you can do better. That’s the mentality you have to have.”

As this interview wrapped up on Monday, Thompson was preparing for his 8am flight out of South Carolina on Tuesday. I asked what would happen if he got a call at 6am asking him to get behind the wheel of the bus again. Would he take it?