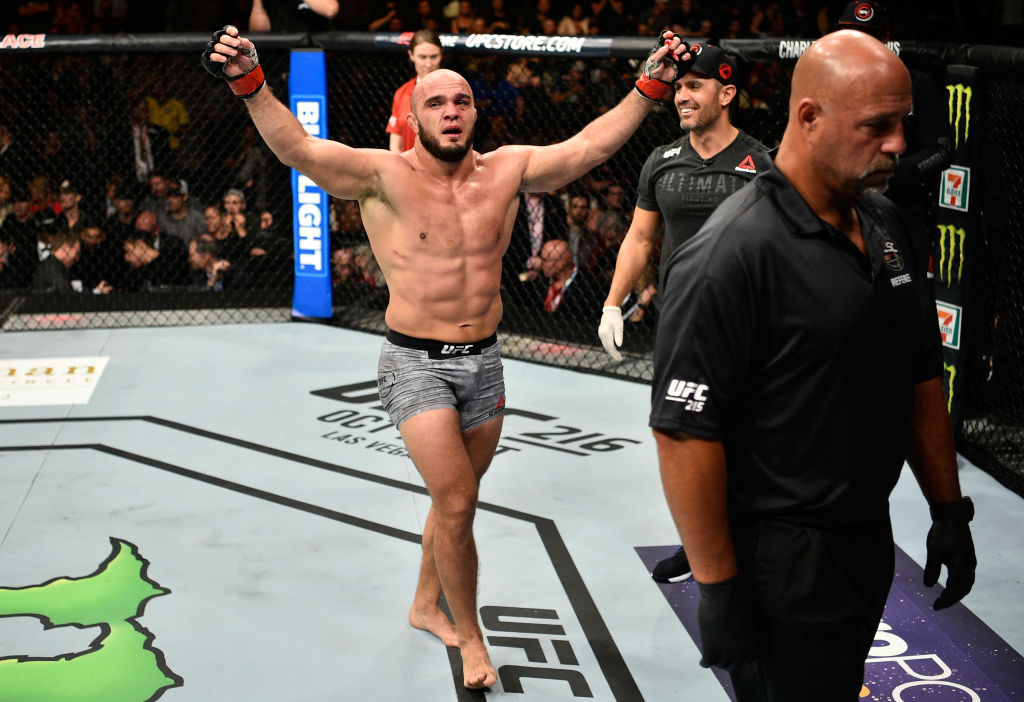 Ilir Latifi of Sweden raises his hands after facing Tyson Pedro of Australia after their light heavyweight bout during the UFC 215 event inside the Rogers Place on September 9, 2017 in Edmonton, Alberta, Canada. (Photo by Jeff Bottari/Zuffa LLC/Zuffa LLC via Getty Images)" align="center" />
Since arriving in the UFC a little under five years ago, Ilir Latifi has become a cult hero within the mixed martial arts community thanks to a combination of absurd power inside the cage and “cooler than you could ever possibly imagine being” photos of the light heavyweight in everyday life.

If you or I tried to pull off a tight white t-shirt under suspenders with red Adidas Gazelles and Ray-Bans while walking our dog, there is no way on Earth we could make it look as good as Latifi does.

And let’s not even talk about riding a horse shirtless down the beach.

Mix in a quartet of first-round stoppage wins and a one-sided decision win over the previously unbeaten Tyson Pedro last time out and you have a burgeoning star on the brink of contention in the 205-pound weight division.

This weekend, the fan favorite looks to build upon his victory from UFC 215 with a showdown against Ovince Saint Preux that started with a polite callout and was agreed to by both parties on social media before the contracts had even been drawn up.

“He’s a top-ranked guy and he’s been a contender for the belt for a while,” Latifi said of Saint Preux, explaining his reasons behind targeting the fifth-ranked fighter as a possible dance partner. “He’s done well and he’s an experienced guy.

“He wasn’t fighting and I didn’t have a fight scheduled so I saw a great opportunity for us to schedule a fight that could be something good.”

In addition to carrying Fight of the Night potential, Saturday’s main card clash between Latifi and Saint Preux also carries a great deal of divisional significance.

Both men are currently stationed within the Top 10 and while a victory would extend Saint Preux’s winning streak to four, halting his winning ways would represent the most significant victory of Latifi’s career and propel him up the rankings.

“It’s very important,” said Latifi in regards to this weekend’s matchup. “It’s my most important fight and I see it as bringing me one step closer to a title fight.”

The pivotal contest was originally scheduled to take place on last month’s UFC on FOX event in North Carolina, but a late injury forced Latifi to the sidelines and resulted in the bout being shuffled to Orlando instead.

While pushing a fight back – or having a fight fall by the wayside entirely – is never ideal, the 34-year-old powerhouse has a very levelheaded approach to the ebbs and flows of the sport that has allowed him to keep focused and roll with the punches in advance of this fight.

“It’s like a fight,” added Latifi, who split his time preparing for this fight between the Allstars Training Center in Stockholm and working with his head coach Selman Berisha in Miami. “A training camp is a fight because you overcome obstacles during that time and sometimes a fight gets pushed or cancelled and you’ve just got to re-focus and be able to deal with it.”

That mindset doesn’t just apply to individual training camps for Latifi, but rather extends to encompass how he approaches his career as a whole, and the results of his even-keeled way of dealing with things was never more apparent than in his return to the cage against Pedro back in September.

After rattling off three victories in nine months, Latifi was paired off with Ryan Bader on the main card of the UFC’s initial event in Hamburg, Germany. Two minutes into the second round, he dipped his head as the former Ultimate Fighter winner went to throw a kick and he took a knee to the dome, ending the fight in a flash.

A year would pass before Latifi once again set foot in the Octagon, but when he did, “The Sledgehammer” turned in his most complete performance to date, using his superior strength and grappling acumen to grind out the tough, young Australian.

“Usually I like to be very busy fighting,” said Latifi. “Before (my fight at UFC 215), I did four fights in almost a year, but these things happen and that’s the sport that we’re in – sometimes we need a longer time off for injuries and recovering and stuff, so you’ve just got to find ways to develop and adapt in those cases.

“It’s just about going through strategies and things that we did before and trying to always evolve,” he added. “I think a lot of fighters, when they have a loss, they try to find an answer, but a fight is a fight and sometimes it’s not about you not being the better fighter – it just wasn’t your day; you did a mistake and the fight is over.

“Sometimes fighters get caught in that and they try to find all the things they need to do differently. Maybe you don’t need to do nothing different – you were doing everything perfect and you just got caught, man; those things happen. I think believing in what you’re doing, working on that and of course finding new things to develop too in your skill set (is crucial).”

That’s what he did following his last loss and again in advance of Saturday’s clash with Saint Preux, and while he knows he’s in for a tough day at the office, Latifi is confident that he’ll be the one to emerge victorious this weekend.

“He’s a tricky fighter – he’s tough, he’s able to withstand a lot of pressure in his fights, so it’s a tough fight,” he said. “I can’t underestimate him, but I’m going to do everything to take this home.