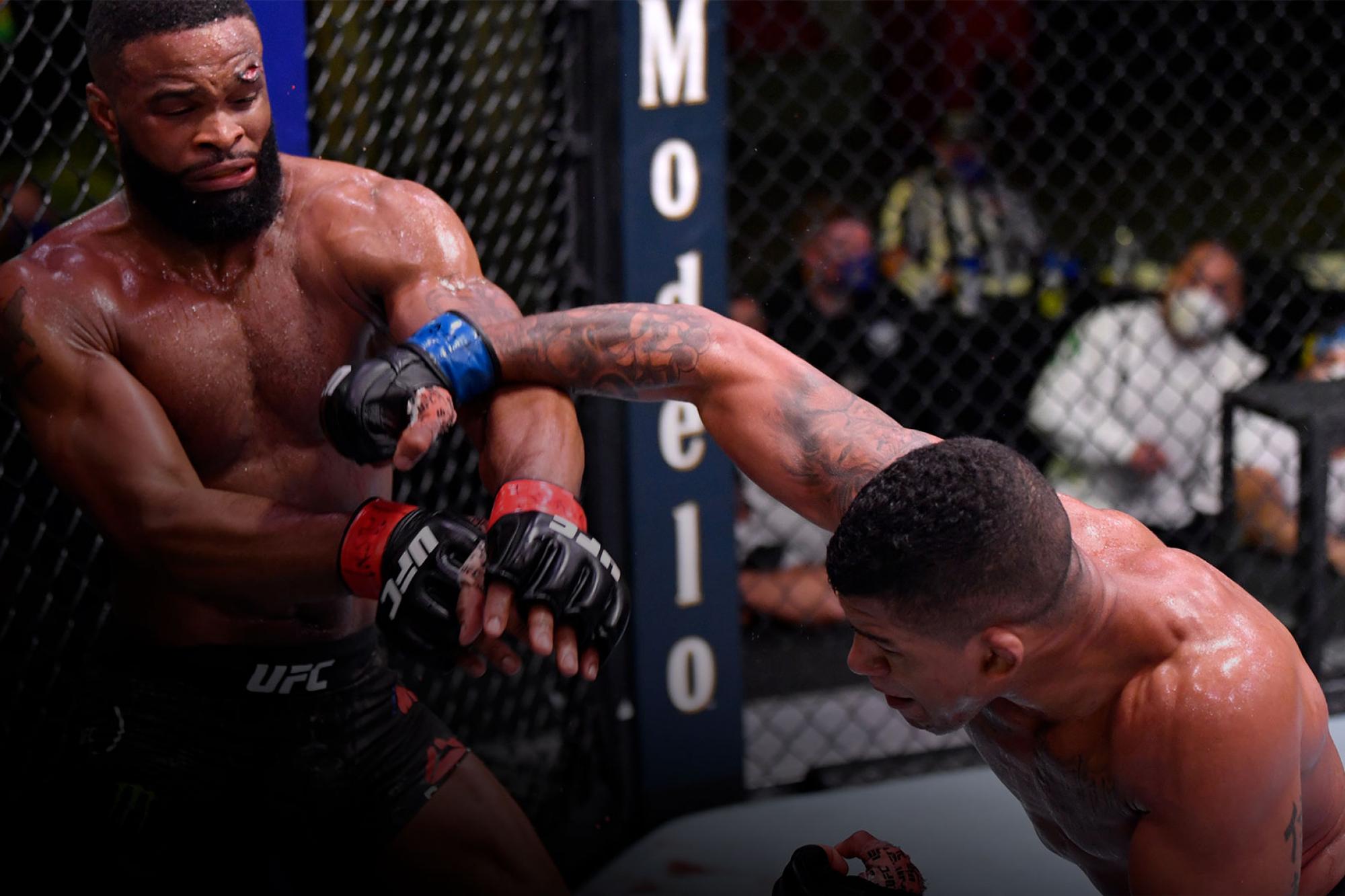 Saturday’s UFC Fight Night event is in the books, and now that the dust has settled in Las Vegas, it’s time to go to the scorecard to see who the big winners were at the UFC Apex.

When speaking to Gilbert Burns before his win over Tyron Woodley, we were discussing the reality that a lot of people thought that he fell out of the sky and into the Octagon over the last couple months, leading to him being the underdog against the former champ. All Burns had to say in response is that when opponents would get in the Octagon with him, if they didn’t know, they would find out soon enough. He said it much cooler, but you get the idea. And that’s just what happened as one of the most well-rounded welterweights in the game did it again, showing just what a change in scenery weight-class wise can do for a fighter. With his jiu-jitsu, wrestling and striking power, Burns is a problem for anyone at 170 pounds, and while some were surprised with Saturday’s outcome, if he puts gold around his waist by the end of the year, that won’t shock anyone.

Brandon Royval didn’t get much time to let becoming a member of the UFC roster sink in. In the midst of the COVID-19 lockdown, he didn’t even get to celebrate properly. That all changed on Saturday after he debuted in the big show with a submission win over flyweight contender Tim Elliott that not only announced his arrival, but put an extra $50,000 in his pocket thanks to the Fight of the Night effort the two 125-pounders delivered. That’s life-changing money for Royval, and while you get the impression that he’s the type to be back in the gym this week, hopefully he gets to exhale a bit and appreciate a job well done.

One of the best parts of watching mixed martial arts is knowing that when a certain thing happens, the fight is seconds away from being over. That’s Mackenzie Dern when a fight hits the ground, and she proved it again with her submission of Hannah Cifers. That’s years and years of jiu-jitsu training on the mat showing up in the Octagon, and it’s why the hype train sped into overdrive when she made her MMA debut in 2016 and why so much was (and is) expected from her. Four years later, she’s starting to put everything together, but it all else fails, there will always be jiu-jitsu.

Leading up to Saturday’s bout with Antonina Shevchenko, Katlyn Chookagian was not in an ideal position. She was coming off a title fight loss in February and facing the sister of the fighter she lost to, Valentina Shevchenko. In the court of public opinion, nothing but a flawless performance would do. And you know what? The “Blond Fighter” delivered. No, she didn’t get the finish of the gutsy Shevchenko, but you can’t imagine a better effort from Chookagian, who made sure the world knows that she’s not giving up her spot among the flyweight elite.

I’ve been in this business a long time, and it never fails to hit me when a fighter tells me of the struggle to get to the UFC. You may look at a fight on the regional scene and say it’s meaningless for a prospect on the rise, but it’s not, because a loss could mean a trip back to square one. That’s where Billy Quarantillo was after his 2016 loss to Michel Quinones and it took him over three years to get back in position to challenge for a roster spot in the big show. That’s a long time with a lot of blood, sweat and tears shed, and Billy Q never lost that hunger, even after making it to the UFC. So when he was on the wrong end of things Saturday against Spike Carlyle, you just knew he wasn’t going to back down, wasn’t going to go away without a fight. And you saw what happened. Now he’s 2-0 in the Octagon and unlikely to be leaving anytime soon. But he’ll never change that mentality of fighting for his job every night.